Last week’s week of action against CATerpillar took in nottingham, Derbyshire and Solihull and ended with a procession through the streets of Brighton on Saturday in protest against High Street Stores selling CAT footwear and clothing. 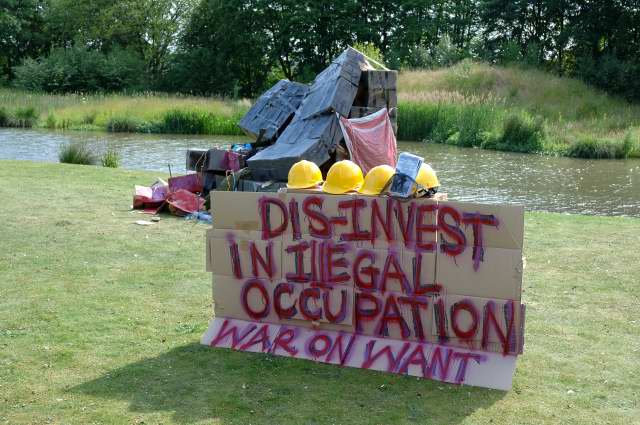 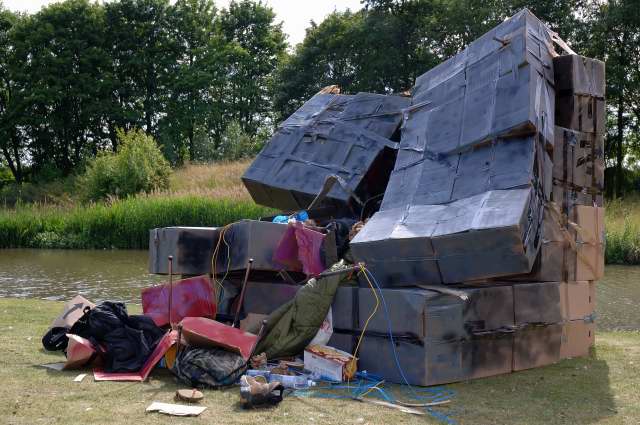 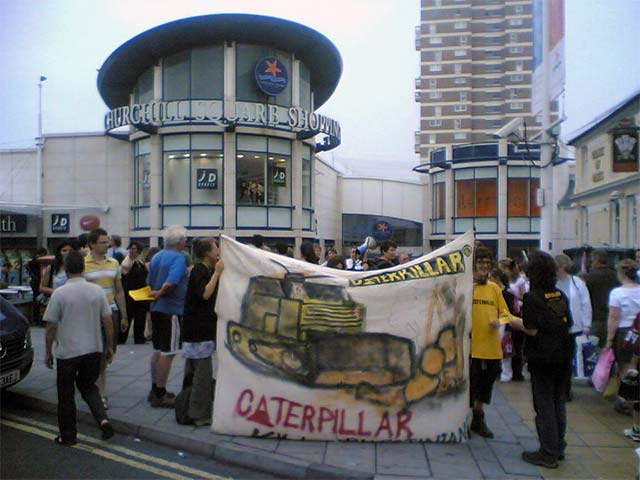 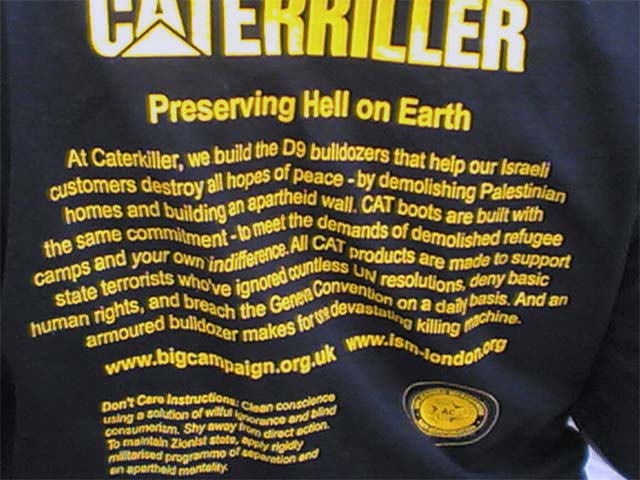 CAT own the sole contract for the supply of D9 and D10 military bulldozers to Israel. These bulldozers are Israel’s weapon of choice for use in illegal house demolitions in occupied Palestine. The Israeli army uses CAT machines to destroy Palestinian civilian homes in acts of collective punishment and to pave the way for the expropriation of Palestinian land. CAT machines are also used in the construction of the illegal apartheid wall, condemned by a 2004 International Court of Justice ruling, and military checkpoints and roadblocks which strangle life in occupied Palestine.

Earlier this year the synod of the UK Anglican church voted not to divest £197 000 from the CATerpillar corporation despite their own ethical investment policy. On the 23rd June activists from Sussex, alongside campaigners from War on Want, visited the conference of the World Anglican synod which was due to vote on the issue of ceasing investments in CAT. A model of a demolished Palestinian home was built outside the conference to encourage delegates to consider the material consequences of investing in CAT. Later that week the World Anglican Synod voted in favour of divestment from CAT.

On Thursday Caterkiller activists visited the Hillhead Quarrying exhibition in Buxton, Derbyshire. Hillhead is a major trade fair where CATerpillar promotes its brand name to potential customers. Protesters entered the exhibition disrupting a demonstration of CATerpillar quarrying equipment and handing out leaflets stating that the UN had criticised CAT’s trade with Israel. At the same time a large banner was hung from the top of the quarry.

On Friday an activist was due to appear at an appeal of his case after being arrested at a demonstration at CAT last year. The trial was vacated due to concerns that too many demonstrators might turn up! Not to be put off activists demonstrated early on Friday morning outside CAT Finance HQ, Hockley Heath. Employees at the Finance HQ weren’t surprised to see us, there have been dozens of protests outside the premises this year including a 200 strong motorcade against their complicity in home demolitions and apartheid.

On Saturday 25th June a group of 20 protesters wearing ‘Caterkiller’ t-shirts held a ‘Boycott Caterpillar’ procession through Brighton. They visited shops that sell Caterpillar footwear, handing letters to staff urging them to stop selling Caterpillar goods, and leaflets to shoppers asking them to boycott Caterpillar. They also delivered copies of War on Want’s ‘Caterpillar: the alternative report’ to all the shops they visited.

The procession started at Bambu in Kensington Gardens – which has stopped selling Caterpillar goods in the last year - and handed in a letter congratulating them on their decision. It proceeded to several other shops in the City, and ended at Churchill Square Shopping Centre where Barratts, Sole Trader and Dolcis all sell Caterpillar goods. They were met with hostility by private security staff, who tried to prevent them speaking to the public, or giving out leaflets, and ordered them to leave the centre and outside plaza. Many members of the public became so incensed by this that they stepped in and tried to stop the security staff removing the protesters. One of the protesters said: “We would like to thank the security staff for drawing attention to us, and arousing the interest of shoppers, who were then very eager to find out what the protest was about. There is clearly a great deal of support for the ‘Boycott Caterpillar’ campaign in Brighton. We will therefore be organising further boycott Caterpillar events”.

If you would like to support future protests, or find out more about the Boycott Israeli Apartheid group in Brighton you can contact us at

The letter handed to shopkeepers read:

GIVE CATERPILLAR THE BOOT!

The Caterpillar Company, in supplying bulldozers to Israel, is involved in the destruction of thousands of Palestinian homes, schools, wells and olive groves. It is also used in the construction of the illegal Separation Wall, which Israel has built on Palestinian land, and which has been ruled illegal by the International Court of Justice. This wall separates hundreds of thousands from their schools, hospitals, fields, families and friends. A Caterpillar bulldozer also killed the activist Rachel Corrie in March 2003.

Caterpillar bulldozers are modified by Israeli Military Industries and have such modifications as machine gun mounts, smoke projectors and grenade launchers. The Caterpillar D9 weighs 53.8 tons and is as tall as a double-decker bus and heavy as a tank and has been described as the key weapon used to destroy houses and Palestinian infrastructure.

As a result of this involvement in the abuse of Palestinian human rights, Caterpillar has been subject to unprecedented criticism from the United Nations and international human rights groups as well as War on Want.

Agriculture is the only source of livelihood for most Palestinians. Caterpillar bulldozers have uprooted extensive areas of cultivated land, including thousands of olive trees. Olive trees need many years to grow before they become productive, so destruction of olive groves has profound effects on the livelihoods of Palestinians.

Hundreds of wells and other water supplies have also been destroyed, severely limiting access to drinking water.

Because Caterpillar bulldozers have been responsible for these actions the Caterpillar Company bears its share of responsibility for the humanitarian crisis that has ensued. War on Want believes that companies must be brought to account for complicity in human rights abuses.

Please joint the Boycott Caterkiller Campaign. Caterpillar produces footwear and clothing in the UK, as well as other merchandise such as miniature Caterpillar vehicles, watches, mugs, bags and stationery. Don’t supply or buy these products – and tell your friends and family to follow suit.”