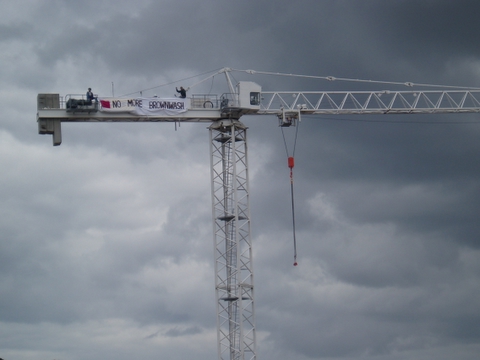 Even before the Brighton & Hove group of the World Development Movement arrived in Edinburgh for the Make Poverty History march on 2nd July, it was clear from well-trailed government briefings that decisions made by the G8 would fall far short of the campaign’s demands. Blair and Brown were claiming credit for putting the issues of aid, debt relief and trade at the core of the G8’s agenda, as well they might, but they were also suggesting that their promises of meagre improvements in aid and debt relief would alleviate the problems of poverty in the African continent.

It was particularly galling to hear that Brown would be joining the march on the Saturday but then there was evidence of how he was beginning to co-opt the campaign. During a speech he gave to a Christian coalition of poverty campaigners that evening, a member of the audience who heckled him about the conditions he was attaching to debt relief was removed by the police. And the rest of the crowd cheered his removal.

Something had to be done. Monday was dominated by CND’s demonstration at the nuclear base in Faslane and the Clown Army’s Carnival of Full Enjoyment on the streets of Edinburgh but Tuesday, the day before the march on Gleneagles, looked like it was going to be a slower news day. So we bought some white sheet material, some brown paint and two sturdy cycle locks. We borrowed some climbing equipment, painted the banner with our chosen slogan, “No More Brownwash”, scouted the building site to see how to get in and wrote a press release.

Our plan of action was very simple. We would get up before work began on the site, buy some provisions to last the day, climb the chosen crane, drop the banner and stay up there until we decided it was time to come down.

Getting in was absurdly easy. A quick jump over the perimeter, a short walk to the foot of the crane and within a few minutes we found ourselves undetected at the top of a very high, and unexpectedly grease-spattered, series of ladders. Our progress was halted by a padlocked trapdoor but our disappointment rapidly turned to delight when we realised that we could simply squeeze through it.

We had a great day. Over the next 12 hours, thanks to fantastic support from other WDM members who alerted and dealt with the media, we fielded about a dozen calls from journalists interested in why we had acted, how long we intended to stay, what the view was like and what we were doing about the contents of our bladders. The journalists, it seemed, were happy to take a few photos, do a quick interview and regurgitate the press release so our message went out as we wanted it to.

The support from Edinburgh's Indymedia centre was also invaluable for producing materials and getting our message out:

Illustrating the right story, on the right day, with an exciting action and the solid support of a small band of committed activists meant that our story was covered comprehensively on TV, radio and press locally in Scotland and the South-East, but was also reported more widely. It was mentioned in the G8 blogs of the reporters representing the national press. Websites as far afield as San Francisco, China, Norway, Canada and New Zealand described it in detail. Radio interviews followed the next day on Radio Scotland and Radio 5 Live and reached wide audiences but we were thrilled when we heard that it had been used on Channel 4 news to introduce a debate about the extent of the government’s commitment to the MPH campaign.

Through the media, we were able to show how ridiculous the government promises were: the insufficient increase in aid will have to wait another 5 years, the debt relief is restricted to those few countries who have agreed to damaging conditions that compel them to open their markets, and trade, arguably the most important issue, is relegated to the status of future discussion point.

In light of this, government attempts to position themselves as the architects of poverty alleviation are an insult to those of us who have campaigned so hard to get them to change their policies towards the developing world. Their free trade agenda has destroyed millions of livelihoods and the crumbs they are now offering are woefully inadequate.

Submitting to the law

Following arrest for the criminal offence of ‘breach of the peace’ – a charge that is imposed on those who cause distress to others – the police took finger-prints, palm-prints, side-of-hand-prints, DNA swabs, a retinal scan and a lot of photos. I had my face photographed 3 times and they then went on to take photos of my torso and even my trousers.

We also suffered an ‘Intelligence Debrief’ where 2 CID officers asked about the objectives, leadership, and age of our group; our background; and attitudes with respect to protest in general. I know it was an ‘intelligence debrief’ because one of them had a how-to guide that he kept flicking through. At one point the comics interviewing me said that I didn’t need a solicitor. They said that answering their questions would help my case and give me an opportunity to promote my cause.

Most people will agree that ejection from the police station after 11pm is mildly better than having to spend the whole night in the cells but then the courts take over. We all needed to appear before the judge, in person, 7 days later on 12 July in Edinburgh – not great for people who live in Brighton. It was 7 hours each way on the train costing £100, required an overnight stay and all for 2 minutes in a sheriff’s court to hear the charge and be given another date. Because the PFI project’s crane we occupied is claiming compensation of £7,000 in lost earnings (even though they carried on working around us) we have to re-appear, again in person, on both 19 November and 2 December, again in Edinburgh. The fine for our action is likely to be around £150 each but could be higher.

We are prepared to pay a price for our action but will fight the claim for compensation.

Was it worth it?

When the three of us decided to break the law by peacefully hanging a banner from a building site crane, we all knew that there would be a legal price to pay even if we did not anticipate the extent of the inconvenience and burden that would place on us.

Our euphoria at occupying an Edinburgh crane and displaying our message about government hypocrisy to the Scottish capital was heightened by the extensive media coverage but we were soon brought down to earth by the mundane command of the judicial process. The arrest, interviews, charge and reappearance before a judge have been tedious, intrusive, costly and frustrating but at no time have we regretted our act of civil disobedience.

After the excitement of the action, the irksome grind of the judicial system and its irritations led us to question whether the protest was worth it. Bloody right it was! Our collective action made us stronger. We increased the volume of dissent. For a brief moment the media left alone the story of anarchist disorder or celebrity love-ins and focussed on the issue of the moment: be critical of the government and keep up the pressure.

If you would like to offer messages of support or donate to the fighting fund, please contact