A 'MASKED Ball' was held by Smash EDO to celebrate the discontinuance of EDO Rugged Systems, one of the businesses operating out of the controversial weapons firm in Home Farm Road, Brighton.

The campaign group has campaigned for over three years for the closure of EDO MBM, which supplies weapons to the Israeli military for their assault on the Palestinians and for the US/UK led occupation of Iraq.

EDO MBM, a wholly owned unit of the US EDO Corporation, has performed dismally in 2006. 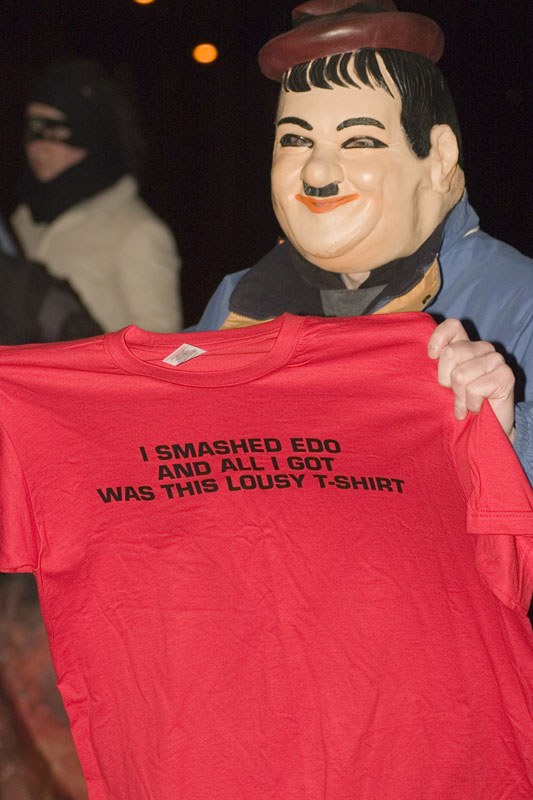 Since March 2006 EDO has lost a major High Court suit against anti-war protesters in Brighton, which caused the resignation of EDO MBM Managing Director David Jones, has been implicated in a high level Pentagon sleaze and corruption scandal involving EDO director and former CIA man Dennis Blair (who was also forced to resign), has been sued for Racial Discrimination and has lost vital orders from the US military for its flagship Warlock counter measure system that appears to have serious security flaws.

EDO Corporation made a net loss in the first financial quarter of this year and failed to hit targets in the second quarter and third quarter of 2006.

In early November James Smith, CEO of EDO Corp, announced the discontinuance of its 'Rugged Systems' line. Listen to the announcement here.

The discontinuance of 'Rugged Systems' will be a major blow to the embattled Brighton factory.

The day after the masked ball, which took place on December 6, three protesters had their first hearing in Brighton Magistrates after blockading EDO MBM.

The blockade took place during Israel's illegal invasion of Lebanon this summer. The campaigners are charged with preventing lawful business.

They will argue that EDO's business is not lawful as they are ancillary to Israel's war crimes in Lebanon.

Meanwhile, on the night of Wednesday December 6, in what is described as "a well planned pincer attack", the three front gates of EDO MBM were locked while the expensive looking fans at the back of the building were pulled from the wall and trashed.

On November 30 bottles of red paint were thrown into EDO's car park and 'MURDERERS' was daubed at the entrance to the car park. The cameras at the front of the factory were smashed and all gates were locked tightly shut.