At 6am on Monday morning, outside the premises of EDO-MBM, Home Farm
Road, Brighton, 8 students from Sussex University,including Student
Union president Dan Glass, have locked themselves to the Brighton arms
factory using D-locks and arm tubes preventing access to the factory.

Banners placed on top of the gates say “Books not Bombs”.

Sarah Johnson, spokesperson for the students said “This is part of a
continous campaign to highlight how much money has been put into
companies like EDO rather than into essential public services. Last every
year nearly £1 billion is given to the arms companies, money which would
be better spent invested in schools and universities.”

The students believe that, in the face of an 655,000 dead in Iraq as a
result of the Anglo American invasion, radical actions are needed to
resist the US and UK's illegal wars. Students feel that they cannot sit
still whilst spending on education is cut back and defense spending
keeps rising.

EDO MBM makes electrical weapons components for the Israeli military. EDO MBM manufactures components to be incorporated into the Hellfire missile, which the Israeli army has recently used to attack the civilian population of Gaza . They have organised conferences
on the development of UCAVs, unmanned aircraft which are widely used in aerial attacks on Gaza . EDO Corporation, of which EDO MBM Brighton is a wholly owned trading unit, has a direct contract with the Israeli Navy who murdered 10 civilians on a beach near Beit Lahiya, Gaza, earlier this month.

People involved in the anti-EDO campaign include, but are not limited to: local residents, the Brighton Quakers, peace activists, anti-capitalists, Palestine Solidarity groups, human rights groups, trade unionists, academics and students. The campaign started in August 2004 with a peace camp. It's avowed aim is to expose EDO MBM and their complicity in war crimes and to remove them from Brighton. 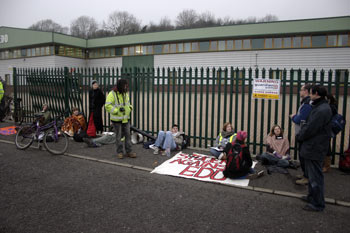 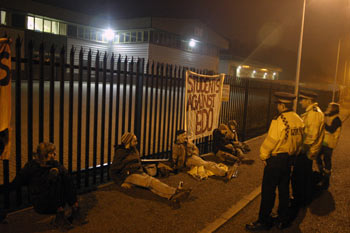 We had a very good video featuring close-ups of EDO staff doing what they do best: deluding themselves and trying to engage in debate. But it was seized by the police we only have a few photographs. In the meantime we await our stolen video's return.