Brighton fights for right to protest

A RIGHT to Protest demonstration is being held in central Brighton on Saturday January 19, meeting at 12 noon in Churchill Square.

The focus will particularly be on recent police repression at the EDO Brighton bomb factory. There have been 15 arrests since August for singing, shouting and generally expressing opinions about the presence of an arms factory in the community.

Local people in Brighton have been campaigning for the last three and a half years against a bomb factory in their back yard. EDO MBM make componants that are used in weapons deployed against the people of Iraq, Lebanon and Palestine.

Recently at the weekly noise demos at the factory police have been using archaic local by-laws to suppress people expressing their thoughts and feelings at the local weapons manufacturers.

In October five people were arrested for singing karaoke badly outside EDO MBM, they were hauled off into a police van after a particularly bad rendition of "We are the Champions". Three were arrested under Section 235 of the Local Government Act (brought in for bad buskers and street drunks) while two were arrested for breach of Section 14.

Other people have faced arrest for blowing an air horn and plugging in a PA. The town demo is aimed to show support for these people and also to safeguard the hard won rights to freedom of opinion and freedom of assembly that are being taken away at an alarming rate in this country. Bring banners, drums, air horns and voices. 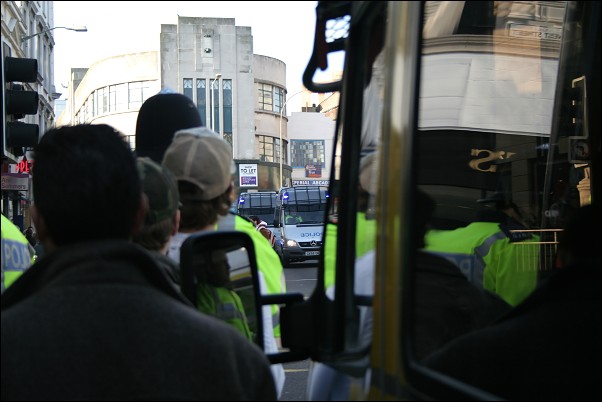 Policing of anti-EDO protests has been heavy.

The march is also called to highlight the take over of the Brighton arms company by ITT, completed just before Christmas. Activists have written to the directors of the new owners urging them to discontinue business at EDO MBM's sites at Home Farm Road, Brighton, and Mill Road, Fishersgate.

"Its closure has been a major subject in local election campaigns. EDO MBM has spent millions of pounds attempting to stop protests outside its factories and has failed, In 2005 the directors of EDO MBM attempted to have a High Court civil injunction imposed on protesters at its Home Farm Road site, the protesters fought the injunction and won. The campaign against EDO MBM is growing and will not stop until EDO MBM has closed down."

The most recent and blatant example of this power was reflected in ITT's relations with Chile. In 1970 ITT's board of directors concluded that Salvador Allende would be elected President of Chile. Allende was campaigning on a platform calling for the expropriation of American businesses, including ITT.

ITT tried to get the CIA to support Allende's right-wing opponent with ITT funds and offered to pay the CIA $1 million to prevent the Chilean Congress from confirming Allende after he was elected.

In October, 1971, after Allende nationalized ITT's 70% interest in the Chilean Telephone Company (Chiltelco), ITT proposed an 18-point action plan to the U.S. Government to strangle Chile's economy, create panic among its population, and cause social disorder, so the Chilean armed forces would overthrow Allende.

Three months later President Nixon created a special inter-agency group to implement ITT's proposal, and the National Security Council's 40 Committee approved a plan to overthrow Allende. ITT directors John A. McCone, former head of the CIA, and Eugene R. Black, former head of the World Bank, were instrumental in getting the U.S. to approve ITT's plan.

Funding for the covert actions was channeled through the CIA, and the World Bank was one of the first financial institutions to cut off credit to Chile.