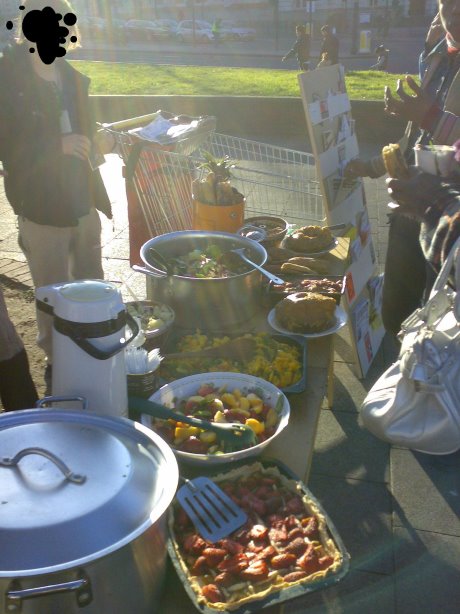 The collective had their stall set up for roughly an hour when their allegedly criminal activities caught the eye of Lambeth's finest law enforcement officials.

Two white male police officers approached the collective and began to browse the selection of free leaflets and pamphlets offered. Whilst one of them (LX 412) appeared to be relatively disinterested in the actions of the suspected offenders, Officer LX 582 was significantly more aggressive and confrontational in his approach.

Whilst said officers originally appeared to be inspecting the proceedings out of a territorial sense of curiosity, 582 began demanding the names and addresses of people without any suggestion of what offence may have been committed or invoking any legislation confirming his right to do so.

Once met with a variety of "no comment" responses, 582 asserted that their small stall in Brixton town square was, in fact, an obstruction of the highway. When the legitimiacy of this application of the Highways Act was challenged, his concerns became for the health and safety of those consuming the food. Were activists in posession of the correct certificates? Then, when activists appeared bemused at the notion of a police officer to attempting to enforce Health & Safety law, it was briefly mooted that a Public Order offence was being committed. This supposed Public Order offence rapidly transformed into an excuse to use Anti-Social Behaviour law, allowing them to place a Dispersion Order on the group of apparently delinquent youths. Names and addresses were taken under threat of arrest, and backup called for.

The backup consisted of 2 Community Support Officers - LX 7268, 7133 and another 2 PC's - LX 284, 816 and (presumably) the Sargeant - **, topped off with Police Vans. Other officers arrived after the initial count, but did not have their numbers documented by those observing.

The Collective were ordered to disperse and prohibited under threat of arrest to re-enter the Dispersal Zone covering Brixton town centre for the next 24 hours.

PC LX 582 rather greedily helped himself to large volumes of the radical information available and, when questioned, claimed that he went "on more demos than you do". As he was not recognized as being part of the FIT Team, it could only be assumed that he was one of the dangerous hardcore revolutionaries on the Police Federation march.

All this whilst members of the public, some homeless, clamoured to get what was left of the free vegan food fest before it had to be taken away. Other members of the public documented the Police behaviour on camera and challenged the Police in support of Reclaim Your Food, whilst many more looked on in a mixture of horror and disbelief. Another passer-by was threatened with arrest for cycling on the pavement, a concerned mother also threatened with arrest in expressing distaste at Police conduct.

In the short time that Reclaim Your Food have been operating in Brixton (every sunday, from 2/3pm onwards), they have enjoyed growing support and participation, with people from many different walks of life expressing positive sentiments about the project, out on the streets, where it counts.

It is hoped that this project will not only continue, but grow in the face of repression by the state. In a society where property is sacred and profit divine, the Police have once again demonstrated whose side they are on.

Solidarity is the best weapon we have.

To get involved you can coming next sunday, around 2/3 pm at Brixton Twon Square in the front of the Ritzy. Or e-mail us for more infos at :

Thank's for your solidarity !