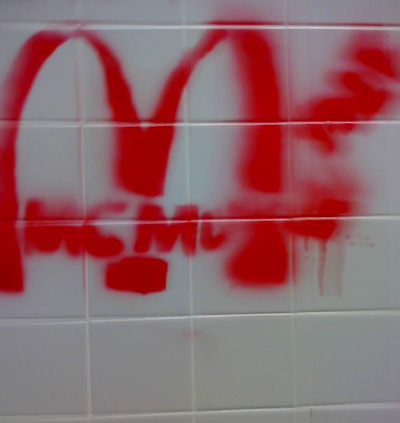 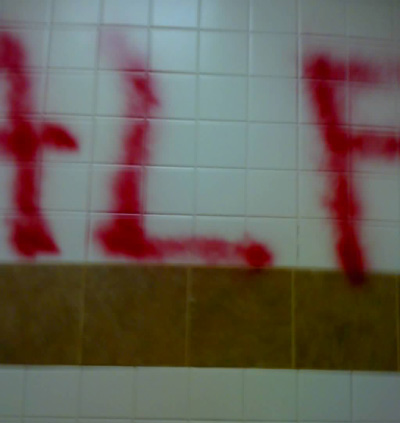 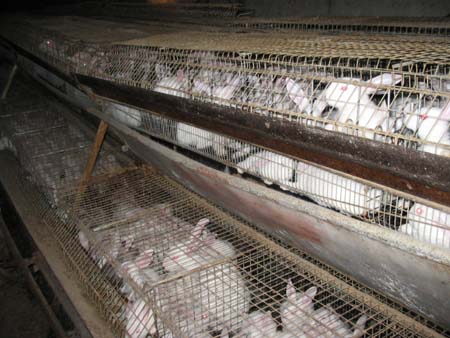 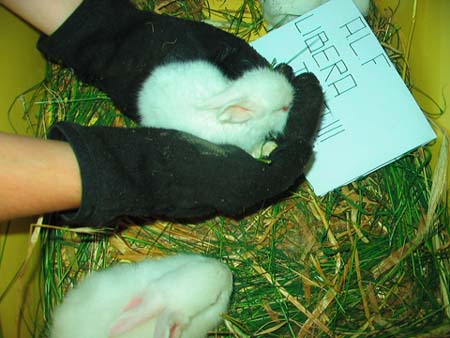 "The night between the 28th and 29th of july we entered the rabbit farm of Lino Fasolato in Via Appia 98 in Abano Terme (PD). This man has been supplying vivisectors all over Italy for many years and in 1991 he was caught in another dirty business: he was catching stray dogs without license and selling them to labs.
The work of Fasolato family deserves no respect and we had no remorse ruining his activity.
What these people consider only as a commodity to be sold are actually wonderful living beings, each of them with an individuality and the desire to breathe fresh air, see the sunlight, run in the grass, dig a hole in the ground, live their life.
For those who see this farm from the outside it is a shed like many others, for those working in it a job like many others.
For the animals concentrated in this hell it is neverending torture. Closed and crowded one on the other in small cages, where they cannot even stand on their feet, stretch the legs or move like every living body needs to do, the rabbits lay here without knowing the reason of such a wasted life: killed by boredom, from physical pain, stress and depression, later on by ignorance and cruelty of researchers in labs.
These people claim their work as absolutely important for our life, giving as granted that the thousands of drugs and cosmetics on the market after being tested on animals are so necessary for our well being.
Even if this was true, there would be no reason to raise and make suffer other inhabitants of this world to fulfill human needs.
Every animal (human included) owns the vital instinct to hide when it feels in danger, to have a protected area, and for these rabbits not being able to dig holes makes them crazy.
We cannot stop thinking about them: from the first time we entered, during a reconnaissance, their eyes and the conditions have been in our minds: dozens of small babies fallen from the cages into the waste pits, dying in faeces; other crushed by the weight of their brothers or with horrible malformations.

After emptying completely some rows of cages we smashed them so that the farmer will have problems putting back those he will catch.
Thirty lucky rabbits came with us and are now in a free and protected environment.
Some pictures and a video can help you have an idea of Fasolato’s farm.

No to torture!
No vivisection!
Dedicated to all those rabbits we couldn’t bring out of that hell.
Dedicated to paola, daniele and Francesco behind bars in itlian prisons.
Dedicated to austrian actiists… this is also for you!

"Over the last few days, NETCU-ALF Division have been out tactically coordinating some extremist activity.

5 Barclay's cash points in Surrey / Hampshire have been rendered useless with a liberal application of super glue.

We would like to make it clear that this action was NOT taken as a result of the handful of LSR (Huntingdon) shares held by Barclays. Keep them, sell them we don't really care. What we are concerned about is your massive investment in the NYSE Euronext. You have the power to pressure the NYSE into dumping HLS once and for all.

The fact that Huntingdon's largest shareholder owns just a quarter of a million shares is laughable. Now that they have been forced into this position of pathetic investments, we are no longer interested in who holds LSR shares. What we want is for Huntingdon to have NO shares. Therefore our demand is simple. Get HLS off of the NYSE Euronext. There will be no compromise. Dumping your LSR shares will not end this, only rectifying the cowards mistake made in December 2006 by the NYSE will end this.

Until such a time as LSR shares are traded by the NYSE, all shareholders, specialists, clearing agents, interests, as well as their subsidiaries, investments are deemed eligible targets.

Yes Goldman Sach's, that means your 25% stake in Pret a Manger makes them a target. Barclay's machines and banks will continue to be sabotaged. AXA branches are also on the list. Until the NYSE makes the right decision, the screws will continue to be tightened, until one of you screams louder than HLS did in December '06. If you have an Achilles heel, we will find it.

We were going to dedicate this action to our esteemed leader, Steve Pearl, but in light of recent circumstances, this one goes out to the recently interned peaceful protestor Daniel Amos. You should have joined the ALF lad!

Its time to stop throwing abuse, and start throwing rocks. Get on the streets and hammer Barclays, Pret a Manger, AXA and anyone else involved in the NYSE. EVERYONE IS A TARGET.

Since the last visits that the Mexican ALF made to those restaurants in the State of México who are merchants of the pain and suffering of animals, we found that some of the owner's are sleeping inside the compound, 'protecting' the interests of genocidal executioners, sure to see who sabotages their establishments, but the FLA got their way, because the old slogans that they saw there after past attacks returned to be seen again on their windows.

Do not try to stop the FLA, because we will not stop!"

"The Devonshire Arms in Bolton Abbey is notorious for its persistent use of foie gras and other 'delicacies' that require animals to suffer acutely. This time the posh Devonshire landrover had its four tyres slashed and was treated to some paint stripper.

This action is dedicated to the Camp for Climate Action in Kingsnorth.

"A FedEx van was spotted making a delivery in Surrey. As a top HLS courier, they are a target of the ALF, and therefore all locks were superglued shut. Deal with hLS, deal with us.

For the animals
ALF"

PET STORE FORCED TO CLEAN UP ANOTHER MESS (Mexico)

"Yesterday night, August 9, we, as a cell of FLA Mexico (Mexico City) again attacked a 'pet' store. We spilled a good amount of paint on the facade of the store and on the door of the owner's house, and we painted the symbols of the FLA and some slogans.

We think that the owner of the store is also a breeder of dogs and roosters for other animal shops, and
also owns two other stores, but while we confirm our suspicions ... we will continue hassling them.

We also want to send warm greetings to the compañerxs who edited the publication 'El fuego que libera,' and a thank you for your support for the actions of the FLA Mexico... continue forward!

For animal liberation, for anarchy, until the exploitation ends ...
F.L.A."

"On August 2 we stoned all the windows of a shelter for fishermen in Guipuzcoa. We did the action in broad daylight. Anyone can carry out these acts against species-based killing. The reason one doesn't act is because one doesn't want to; no excuses.

"July 29th 2008 Figino serenza (Como)
In the first hours of the morning we entered the property of pheasant farm 'Roncorone' and put ourselves at work. One complete side of the prison (divided into different sheds) has been cut. In the meantime we also cut the net on the ceiling, opening big holes to the starry night.
In this way the animals can run to freedom, instead of living in a cage and dying shot by hunters.
Animals are our brothers and sisters and we have to liberate them from the cruelty of their exploiters.
No cage is stronger than the love we feel."

reported by activists in Estonia:

"July report:
4. fur shops and one fur studio were attacked, slogans were painted and
locks glued.
One shop and one studio were closed. Maybe because of the ALF or they
just do not have market."