Nauticalia fur shop under pressure from a shocked public

Nauticalia felt the pressure today not only from protesters, but from many members of the general public. Aided by the fact that earlier this week Channel 4 aired graphic images of fur farms and factories in their show 'Kill it, Skin it, Wear it', activists from across the south were to put up a strong resistance against the fur industry. 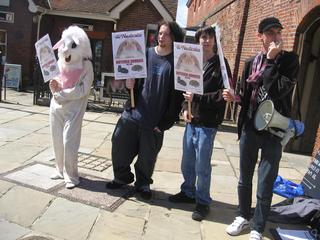 But it wasn't just activists and tourists who were appalled that Portsmouth is being kept back in the dark ages and not allowed to progress as a fur free city, local police, businessmen, bus drivers, and even the staff of the dockyard spoke out in disgust.

The Dockyard were doing their best with PR to try and cover up the fur scandal by sending people out with money off vouchers and leaflets, but these were conveniently the same size as the SARC leaflets and so most people in the area were telling the Dockyard workers they had already been leafleted. Shame.

Our megaphones were loud and to the point and the SARC Bunny filled pages of her petitions to be send right to Nauticalia.

The Campaign against Nauticalia will not end until all ties with the fur industry do.