On Wednesday, August 13th, activists from across the South made our weekly trip around the area to target companies who profit from the horrific torture which happens inside HLS on a daily basis.
We turned up at Sandoz in Bordon nice and early (as early as their injunction allows) and were greeted by the gates already swung shut and people running quickly past the front doors so they didn't have to see our banner or placards.

The rain started and it proved that even the most horrific of weather cannot deter our raw compassion and dedication in ending horrific animal abuse. Although one of the police who was present did tell us he thinks we're all crazy for not just packing up and going home, Getting wet is nothing compared to knowing that we stood by and let 500 animals be slaughtered to death every day inside HLS without us speaking out.

After our 15 minutes of megaphone time and our three quarters of an hour of strong and powerful chanting, it was time to pack up and move on to our next target, ironically also being owned by Novartis.

Our next target was Ciba Vision in Surrey. When we arrived we were surprised to find that there had been a mix up with the police and no one had told them about our planned demonstration. This meant we had a good fifteen minutes of uninterrupted megaphone time to tell everyone that Ciba Vision profit from using a lab which employs sex offenders, drunks and drug addicts to conduct tests on animals. When the police did show up we politely informed them that although they did not receive notification of our demo, it had been given within the terms of the injunction and so they really had no problem with us.

After Lunch we headed out towards London to see PDP, a horrible freight company who are paid by HLS to ship a number of disgusting items into the labs. PDP share an estate with Fed Ex who are also a freight company used by HLS, so our time using megaphones here was double as useful. As was sending an activist up the road to leaflet everyone in the estate that passed who wondered why someone like PDP would need to deal with a lab who punch beagle puppies in the face.

Our final target of the day was another double whammy as we went to see the workers at Abbott Labs and Wyeth off after a hard days work. Initially we had been targeting only Abbott, but as soon as Wyeth started finding it funny that Abbott were being shouted at by the Animal Rights activists, we split our demonstration in two and took turns in telling both of these companies that HLS are a disgraceful business to be dealing with and that we do not forget about companies who deal with HLS until all ties are severed. Plenty of cars sped past us in a desperate attempt to escape the truth, but the truth caught up with them with quite some bump as the activists shouted louder than ever with all the compassion in their hearts and minds.

An excellent demo to top off another successful day for SHAC. 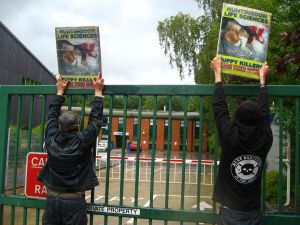 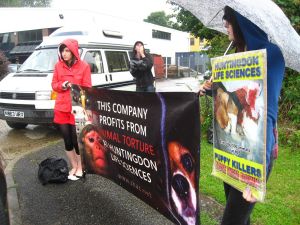 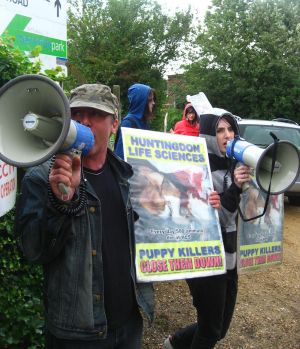 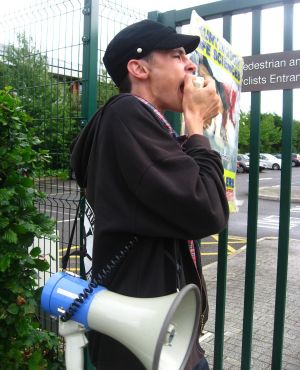 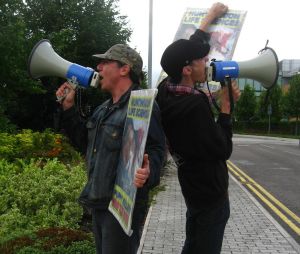