Brighton's Mayday! Mayday! street party saw 2,000 people from all over the country gathered to protest against capitalism, war and the arms trade. It was called by Smash EDO, the movement that has been campaigning against the EDO MBM/ITT bomb component factory in Brighton for the last 5 years. 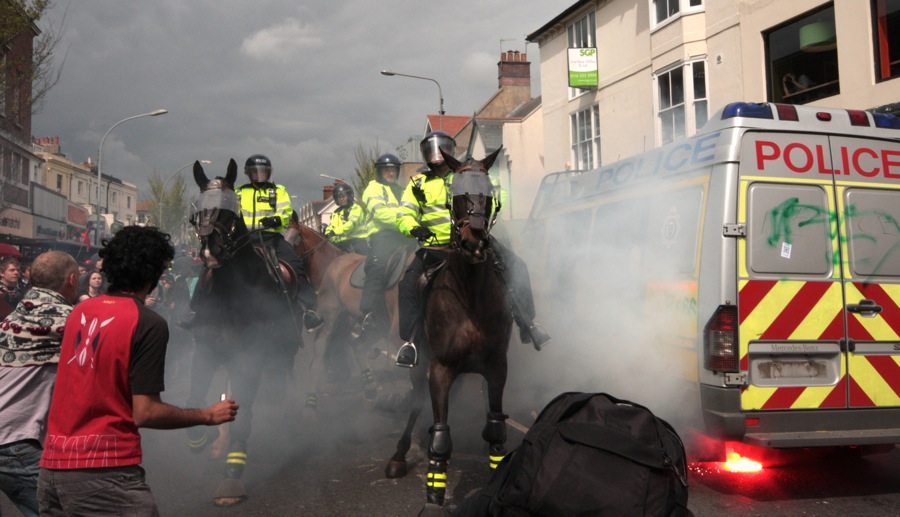 The day before the Mayday demo saw FIT monitoring the front and back entrances of the Cowley Club in Brighton, where ananti-militarist conference was taking place, as well as paying regular visits to the Mayday convergence centre down the road. FIT, however, having suffered from adverse press and criticism from local MPs after they monitored the Earth First gathering and the Shut ITT mobilisation, did not bring their cameras and limited themselves to taking notes on who went in and out of the club.

The morning of May 4th saw the expected strong police presence both outside the Cowley Club and convergence centre as well as at protest targets in Brighton town centre. Targets had been published on Indymedia in the form of an Anti-Militarist map of Brighton. A division of mounted police parked up on the seafront and gave their horses some exercise and sea air. Smash EDO Radio began broadcasting at 10.30am with the meeting point still unknown, entertaining listeners with spoof ads for EDO MBM/ITT's latest state-of-the art killing tools. At 11am cyclists started to gather at Brighton station and half an hour later the 50-strong critical mass bike ride with two sound systems headed for the sea accompanied by two police horses, Evidence Gathering camera teams and a number of vans.

Around 11.45 Smash EDO Radio announced the meeting point was to be the Aquarium roundabout opposite Brighton Pier, which the critical mass reached at 12 noon, when cyclists started circling the roundabout. Crowds started to gather at the entrance to the pier and a sound system was brought onto the roundabout to join the cyclists, as people started dancing on the, by then, blocked off roundabout. The FIT (Forward Intelligence Team) made their way onto the roundabout but were driven off as more protesters arrived and the police didn't attempt to prevent the roundabout being taken.

Around 12.45 the crowd, now numbering over 500, moved off towards Brighton town centre fronted by a line of mounted police. At Barclays Bank on North Street scaffolding was scaled and a banner reading 'No Arms Dealers in Our Communities” unfurled - Barclays is the largest single investor in ITT with over 4 million shares. As police moved in to seize the climbers the crowd created a space for them to descend safely. A paint bomb also hit Barclays. There was a carnival atmosphere with a dragon winding through the crowd, people in red fancy dress, as well as a padded block and reinforced banners at the front.

The crowd stopped outside the Army Recruitment Centre on Queens Rd, which was redecorated with spray paint and red paint. Again police who moved in to make arrests were repelled. FIT and EG teams were constantly hampered as they tried to film and take photos. A CCTV van was spray painted at the station and the crowd, which had swelled to well over 1,000, headed down Trafalgar Street. Once on London Road attention was focussed on McDonalds, although the cans thrown were ineffective against the plate glass. As police cleared the pavement outside McDonalds a flare was set off under a police van, which was then rocked on its axles.

With the police having blocked off London Rd the crowd went down a side street and up the hill away from the centre with the police outmanoeuvered. Mounted police managed to get in front of the march on Ditchling Rd but by the time the police had blocked off this road the march had headed off through a residential area back to the London Rd and into Preston Park. A heavy police presence was deployed outside RBS opposite the park.

At 2.30, some stopped to party in the park whilst others headed up Preston Drove and through residential areas back towards the town centre. The first arrest came with somone seized for 'assault' as the police, despite their large numbers, failed to contain the more dispersed groups and became increasingly aggressive, resorting at one point to baton-charging the reduced crowd. The crowd continued to evade police attempts to kettle them in and even managed to kettle the police at one point on Traflagar Street. The crowd split into two as one part headed for the sea with the other settling on the green outside St Peters Church on London Rd. After a rest this part started off for the seafront as the crowd joined again briefly with the police in hot pursuit. A cat-and-mouse chase through the Pavilion Gardens and historic Lanes part of the town ensued as bemused daytrippers and tourists looked on. The police lashed out with one woman collapsing after being batoned in the kidneys and another being knocked off her bike. Many peoples' legs were batoned.

At least 30 protesters suffered injuries, most minor with a few requiring visits to A & E. Police horses were put in harms way by police officers and they may have sustained some injuries.

That evening windows were smashed at RBS and HSBC, shareholders in ITT< and Shell was targeted in solidarity with the struggle against shell in Rossport.