THE REAL agenda behind Nigel Lawson and his book pooh-poohing climate change was exposed by campaigners on Friday July 10. They gathered outside St John's Chapel, St John's Road, Chichester, where the former Chancellor under Margaret Thatcher was giving a talk as part of the "Chichester Festivities". Lawson is not a scientist and it is clear that his attack on the environmental movement is politically motivated and stems from his key role in the world of neo-liberal politics. Sussex Police felt the need to provide protection for Lawson, with five uniformed cops plus various security bods outside and a meat wagon touring the area. However, this did not stop the local campaigners from handing out leaflets to virtually every member of the audience as they entered the building. 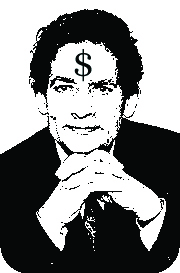 Here is the text of a leaflet to be handed out:

CLIMATE change is today pretty much universally recognised to be very real and to be very dangerous.

There are still a few organisations that are holding out against this inconvenient truth in different ways. ExxonMobil, the world’s largest oil company, is continuing to fund researchers who cast doubt on global warming, despite public promises to cut support for climate-change sceptics, reported The Daily Telegraph on July 2.

The British police also continue to treat demanding action on climate change as a crime, brutally attacking protesters whenever they get the chance, such as at Kingsnorth power station last summer and the City of London in April this year.

Lining up beside these forces is Nigel Lawson, invited by Chichester Festivities to put across the views expressed in his book An Appeal to Reason: A Cool Look at Global Warming.

So why has a former financial journalist and Chancellor waded into this rather specialist field of debate?

As Graham Steward noted in The Spectator: “Would we take seriously an appraisal of his time as Chancellor of Exchequer written by someone whose only expertise was in oceanography?”

Robert Watson, the former head of the Intergovernmental Panel on Climate Change and now chief scientist to the Department for the Environment, Food and Rural Affairs, accused Lawson of selective quotation and not understanding “the current scientific and economic debate”.

He also wrote in a letter to The Telegraph: “Lord Lawson’s perspective that the UK and Europe are over-reacting to the threat of human-induced climate change is substantially wrong and ignores a significant body of scientific, technological and economic evidence.”

Robin McKie in The Guardian wrote of Lawson’s book: “Although it claims to demolish the cause of global warming, it simply piles up scientific howlers... What really grates is Lawson’s conviction that most of the world’s climatologists, meteorologists, atmospheric physicists, Arctic experts, and biologists, as well as several Nobel Prize winners, are all stupid, misguided and wrong in thinking man-made global warming is real...

“It is breathtaking arrogance, to say the least, although Lawson is not alone in displaying it… These Grumpy Old Deniers feel their lifestyles are threatened by greenies and so reject the entire concept of global warming. ‘With the collapse of Marxism, those who dislike capitalism have been obliged to find a new creed,’ says Lawson.’ For many of them, green is the new red.’ In short, global warming is a commie plot.

It is clear that Lawson’s position on climate change is political rather than scientific in origin. His position is that he accepts the IPCC's conclusion that we can expect to see a warming of between 3.2ºF (1.8ºC) and 7.2ºF (4ºC) by the end of this century. But he argues that this would not necessarily be the disaster requiring an immediate cut in carbon emissions - just the message that the Big Business polluters want to hear!

This connection is hardly a surprise coming from Lawson. He was a key proponent of the Thatcher Government's privatization policy. During his tenure at the Department of Energy he set the course for the later privatizations of the gas and electricity industries and on his return to the Treasury he worked closely with the Department of Trade and Industry in privatizing British Airways, British Telecom, and British Gas.

He also has a background in propaganda, having penned a 1972 report on Subversion in British Industry for the right-wing Institute for the Study of Conflict. He has attended Bilderberg conferences alongside leading bankers and other rulers of the capitalist world and is a non-executive director of N M Rothschild & Sons as well as chairman of the Central European Trust which boasts of co-managing “the largest private equity fund in Central Europe” and chairman of Oxford Investment Partners, which proposes a “multi-asset, unconstrained, investment approach.”

Lawson and the world he represents object to any challenge to the power of high finance and the unsustainable greed of global capitalism – his motives in launching his crusade on climate change are dubious to say the least.

This is a man with an agenda and you can be sure that the interests of the environment and humanity do not feature on it.