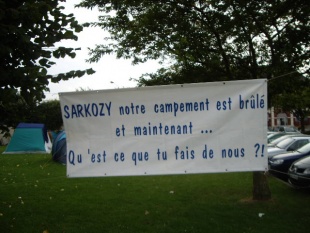 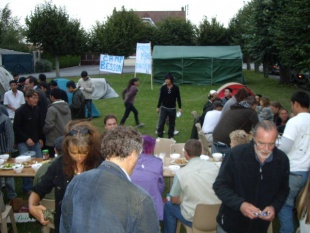 Tuesday 7th September at 7am it took 82 cops to detain 85 migrants at a long established camp (2007) sited on farm land close to the A26 The cops then cut down the trees in the copse where the camp was sited and torched everything except the single bag of possessions that each migrant was allowed to take and the equipment that local supporters from Fraternité-migrants were allowed to retrieve.

But it is the local support that is the real story. 52 of the migrants were taken to Coquelles and 28 detained at the National Police station in Liévin. The later were released that afternoon, collected by volunteers and taken back to Angres. At 6pm there was a town meeting at which it was decided to set up a camp outside the town hall to house the 28 Vietnamese and 7 others who were found wandering around after the camp’s destruction. Volunteers stayed in the camp overnight as the old camp had been attacked on the previous Friday night and a couple of migrants beaten up.

THE 52 DETAINED AT COQUELLES (near Calais) ARE THREATENED WITH DEPORTATION, CIMADE AND OTHERS ARE ORGANISNING THEIR LEGAL SUPPORT – and looking for interpreter…as the one they have cannot cope with so many cases.

Sarkozy is President of France, not the immigration minister as the caption indicates

I think you'll find the camp is called Besson after the immigration minister, but the banner in the picture at Camp Besson is addressing Sarkozy, the Prime minister.