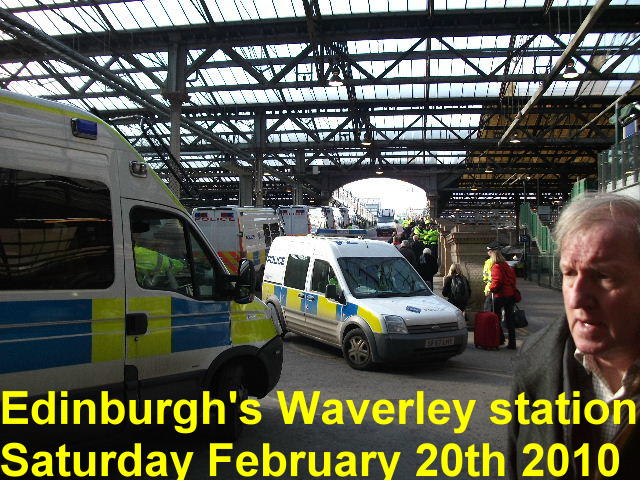 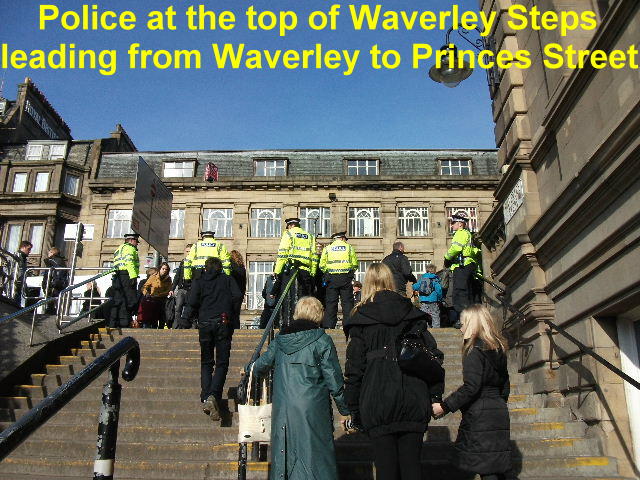 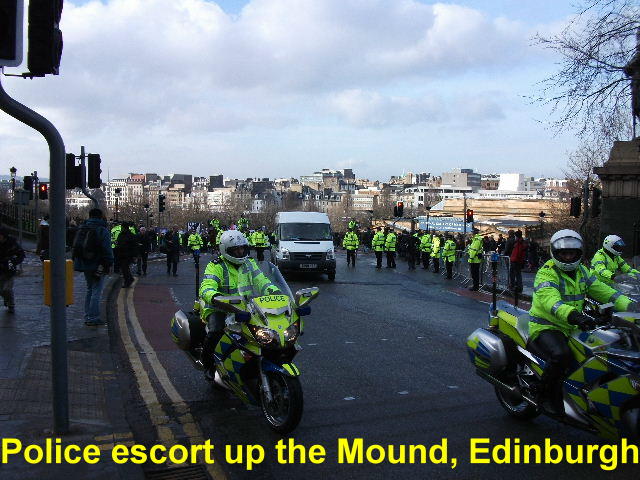 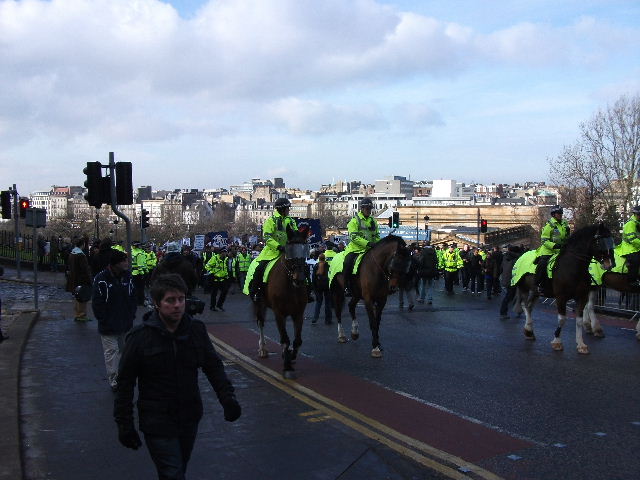 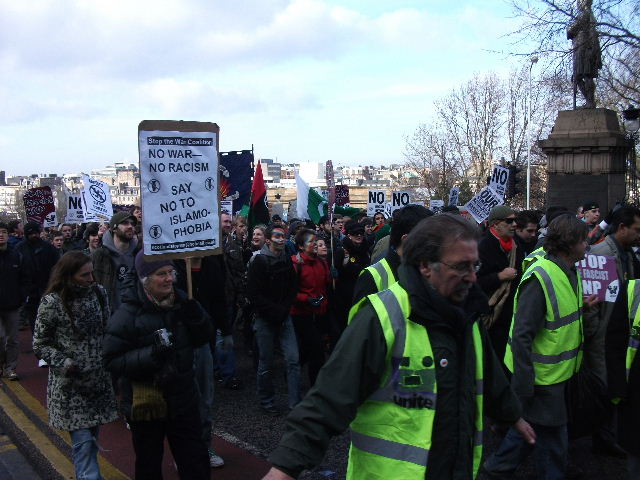 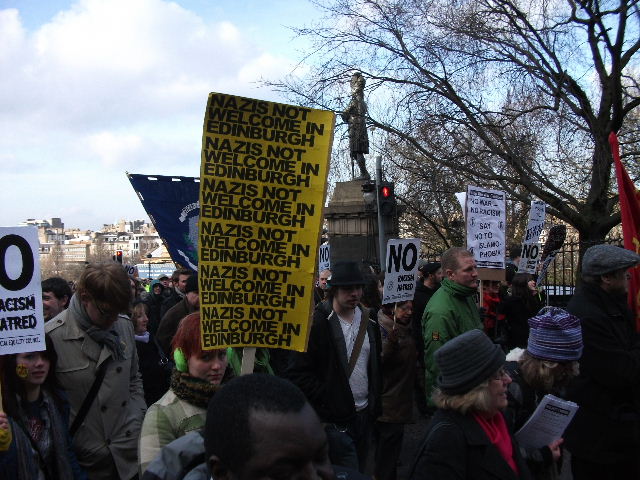 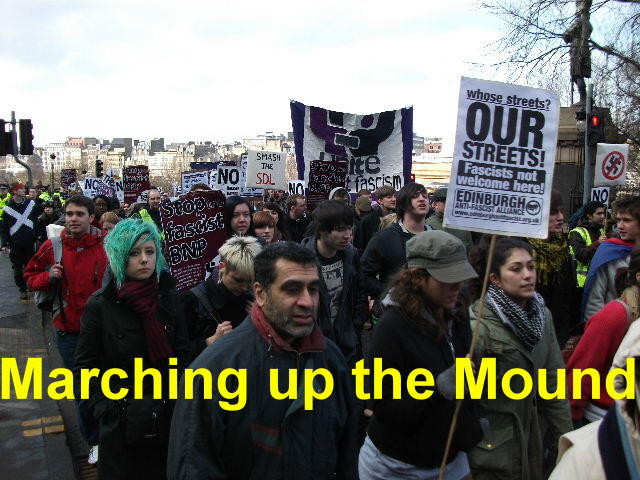 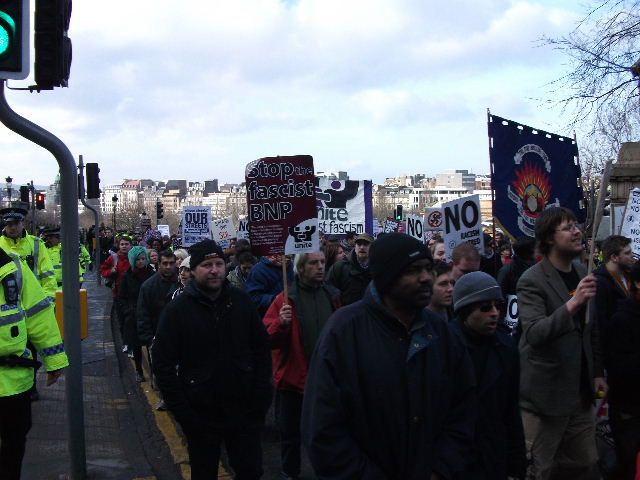 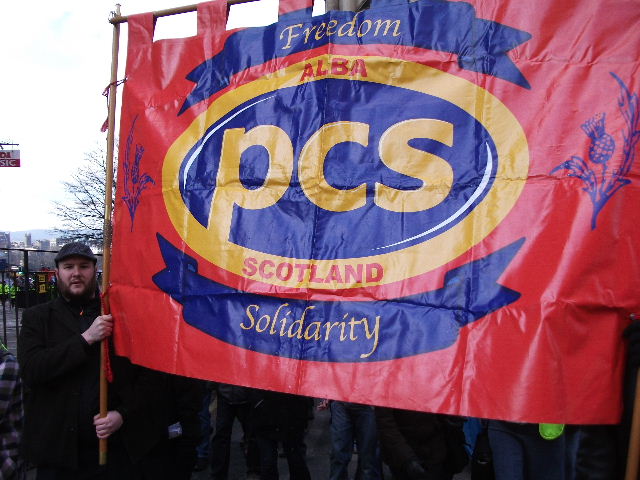 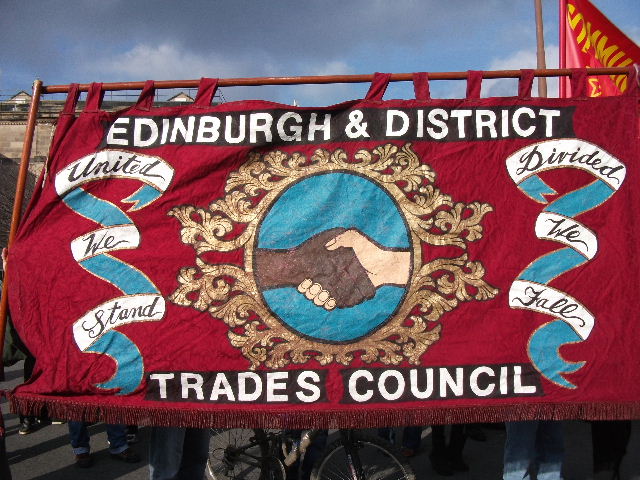 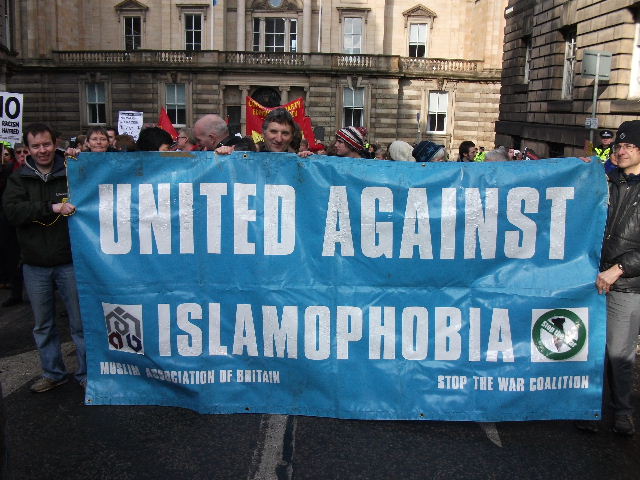 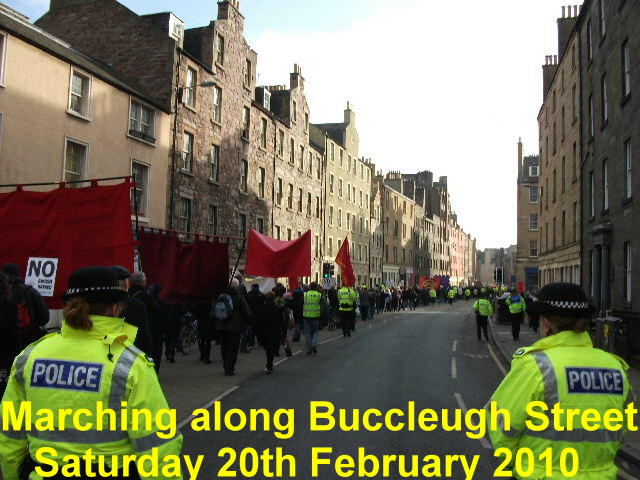 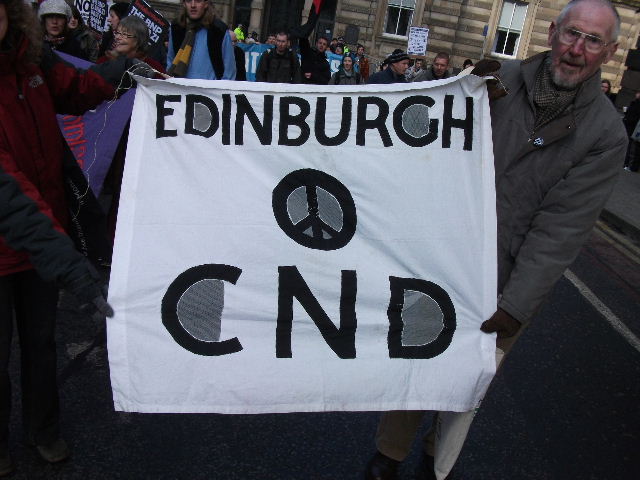 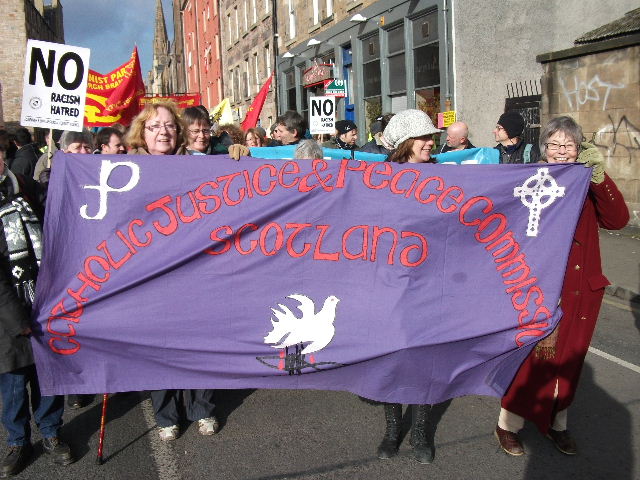 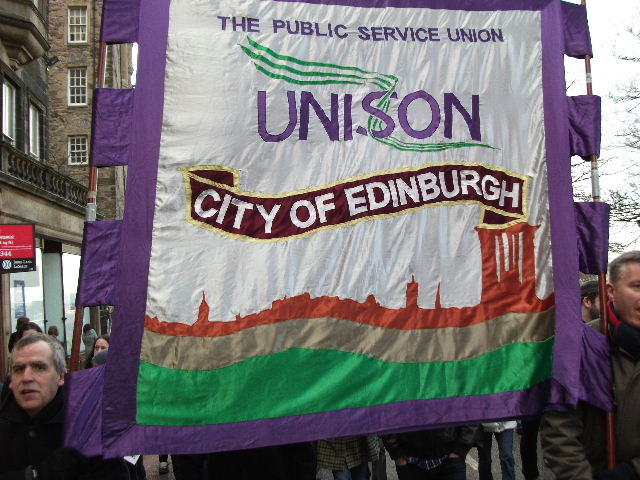 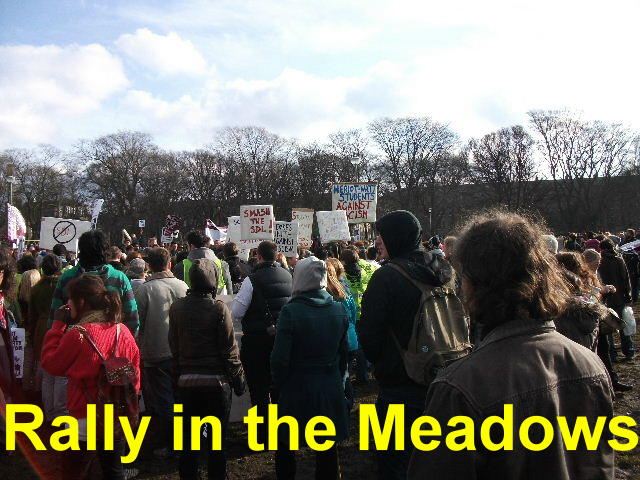 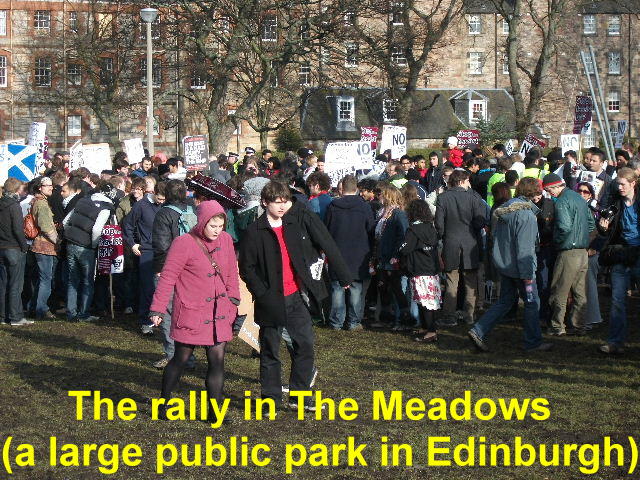 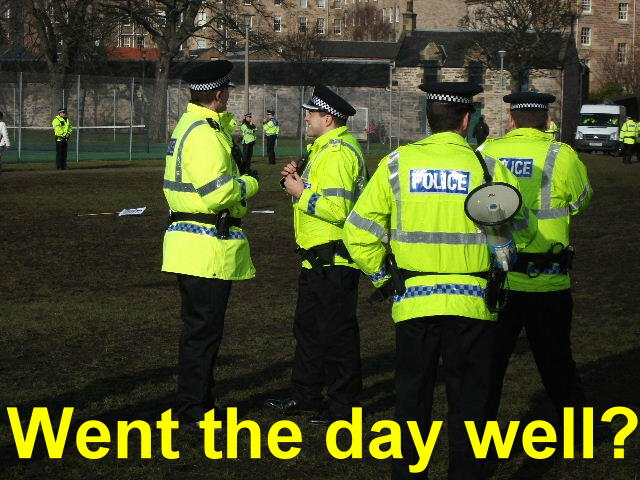 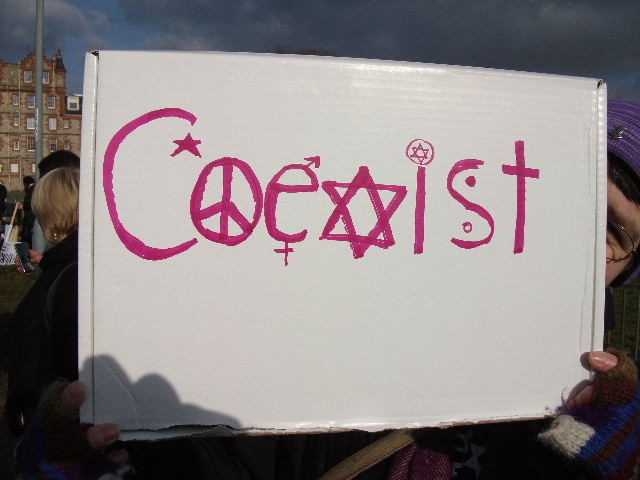 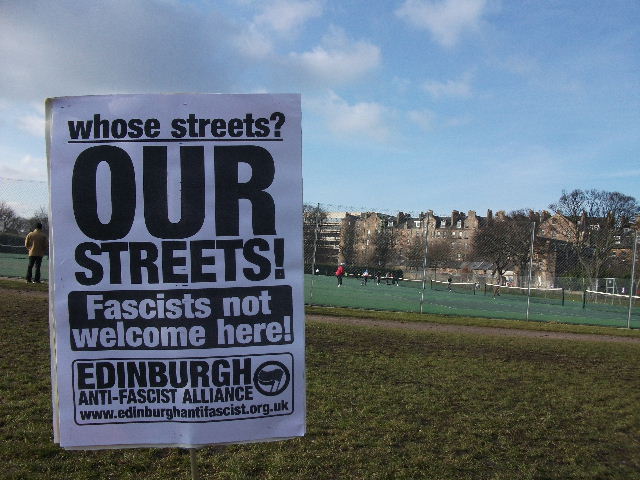 Scotland United Against Racism and Fascism

Around 2,000 people from across Scotland marched and rallied on Saturday 20th February against racism and fascism in Scotland's capital city. The protesters marched from the Ross bandstand in Princes Street Gardens, up the Mound and along the George IV bridge and Buccleugh Street to the Meadows park in Edinburgh's south side where a rally was held. The event was attended by a number of politicians including Malcolm Chisholm MSP (Member of the Scottish Parliament for Edinburgh North and Leith)

20 photos of the day are included along with a report from the BBC news website along with some details of how the Sunday Post reported the event.


The Sunday Post of 21st February had a small piece at the bottom of page 5 headlined 'Cops defuse demo flashpoint'. There was also a photo on the front page titled 'Protest groups in capital stand-off'. The paper said that 2,000 anti-racist campaigners held a rally to oppose the SDL's (Scottish Defence league) planned demonstration. The report suggested that some 70 sympathisers of the right-wing Scottish Defence league were prevented from leaving Jenny Ha's pub at the bottom of the Royal Mile by a large police presence. The 700 strong force included officers from Northumbria. The Sunday Post reported that five people were arrested for public order offences.

From the BBC Scotland website of Saturday 20th February 2010:


Thousands of anti-racism campaigners have staged a demonstration and march through the centre of Edinburgh.

It was arranged in response to a threatened protest by the Scottish Defence League - a right-wing group claiming to oppose Islamic militancy.
There were minor skirmishes as anti-fascist protesters tried to enter a bar on the Royal Mile where they believed members of the SDL had gathered.
Police confirmed that five arrests were made for public order offences.
About 90 people were kept inside Jenny Ha's pub, opposite the Scottish Parliament, by police who blocked the doors and sealed off the area to stop the rival groups clashing.
They were later taken from the building and put onto buses which then left the city.

More than 700 officers were deployed to police the event. Assistant Chief Constable Iain Livingstone, of Lothian and Borders Police, said he was pleased no major problems occurred and he thanked members of the public for their co-operation. It is understood extra officers from Northumbria Police in England had been drafted in to help.

Student protester James Nesbitt, 23, from Glasgow, said: "We had spotters out across the city looking for fascists in pubs. We got here quickly but the police are doing everything they can to keep us away from them.
"We're here because people are frightened with the developments in the far-right."

Politicians, trade unionists and faith representatives taking part in the Scotland United rally gathered at the Ross Bandstand in Princes Street Gardens ahead of a march through the city centre to the Meadows.

Organisers said about 2,000 people took part in the demonstration.

Lawyer Aamer Anwar said that the march would serve as a warning to the SDL to "stay away".
Another of the organisers, Osama Saeed of the Scottish-Islamic Foundation, said: "Today is a further humiliation for the SDL. They only got ten minutes in the rain last November in Glasgow. They didn't even get that today.
"This is only due to good people coming out in numbers to take over Edinburgh's streets. The threat from the far-right cannot be ignored and simply wished away."

Speaking before the demonstration Supt Lesley Clark, of Lothian and Borders Police, said: "We will facilitate peaceful protest and we are confident we have contingency plans in place to respond promptly to any emerging issues.
"We been advising businesses in the city centre and engaging with the many diverse communities who live and work in Edinburgh.
"We have been reassuring people that while we have no reason to believe there will be any cause for concern, we will take appropriate action to deal with any anti-social behaviour and criminal
activity."

Justice secretary and MSP for Edinburgh East and Musselburgh, Kenny MacAskill, said: "This capital has a proud record of being open to all, and racism has no place here or in modern society.
"The vast majority of people in Scotland embrace equality, diversity and the idea of a one Scotland, many cultures.
"Today is about making a stand against those who would seek to divide and saying to them that their views are not welcome, as well as showing to the world that Scotland will not tolerate such views."

Scottish Labour leader Iain Gray, who also attended the march, said: "The message from today's rally was up-beat and clear - Scotland will never stand by and allow hatred and bigotry to have its day.
"Scotland is an open, tolerant country. There is no place for - and Scotland will give no platform to - those who would divide our communities and attack our citizens.
"It is right that politicians of all parties work together to stop the rise of extremists."

The English Defence League has held several demonstrations, including events in London, Manchester and Leeds.
The group describes accusations of racism or fascism as "flat-out untrue".

The SDL was formed in protest against Muslim "extremists" and "jihadists", the group has said.