What if Iran had carried out the Gaza carnage? 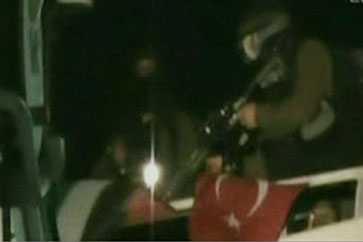 It's not unjustifiable to consider Israel as the absolute incarnation of fraudulence, relentlessness and brutality. Since its establishment, the Zionist regime has carried out actions which contravene the international regulations and cancel out the human rights in a way or another. Only a brief look into the account of Israel's bloody interaction with the Palestinian people over the past years shows us that this fabricated regime does not deserve "the right of existence", as the U.S. and European officials put it periodically.

The Monday assault of the Israel Defense Forces into the flotilla of humanitarian aids which was heading to the besieged Gaza Strip from Turkey left at least 10 dead and several other wounded. Never mind that Israel's criminal action violated the 4th Geneva 1949 Convention. Just imagine for a single moment that Iran had carried out the carnage instead of Israel. Simply replace the two names and then read the news as reported by CNN: "The Free Gaza Movement, one of the organizers of the aid, said that Israeli commandos dropped from a helicopter onto the deck of one of the ships early Monday and immediately opened fire on unarmed civilians."

Since September 2000, Israel killed more than 6,300 Palestinians, most of whom were children and defenseless civilians. Israel has also demolished more than 25,000 Palestinian homes since 1967. It possess up to 200 nuclear warheads in violation of the United Nations Security Council resolution 487. Interestingly, it receives something around $7 million of military aid from the U.S. per day. 7,383 Palestinians are being kept in the prisons of Israel. The racist regime of Israel has built 223 settlements on the Palestinians' confiscated lands. Over the six-year period between September 2000 and February 2006, 36589 Palestinians were injured by the Israeli forces of whom 3530 Palestinians were permanently disabled or maimed. Shockingly, this six-year period was witness to the confiscation of 249680 km2 of Palestinian lands. Israeli forces even refused to overlook the Palestinian trees as they uprooted 1,187,762 Palestinian trees from 2000 to 2006. This shows the nature of the brutal regime of Israel which is even at odds with the natural resources and trees, let alone the human beings.

Although it's practically unthinkable, try to replace Iran and Israel, imagining for a single moment that Iran is the occupying state that kills at least two foreign civilians a day, beleaguers some 1.5 million people who don't have any access to the barest rudiments of their daily life and live under the continual threats of military assault and are in dire need of humanitarian assistance. Would the so-called international community tolerate it? Would the UN Secretary General suffice to a simple "expression of concern" with regards to such an incessant viciousness, if it had not been Israel?

To be honest with ourselves, Israel is enjoying an unconditional impunity from all of the international rules, laws and regulations and acts like an autonomous state which does not come in terms with any obligation and responsibility. After the dissolution of South Africa's apartheid regime, which was recently revealed to have had a nuclear deal with Tel Aviv in 1957, Israel is the only apartheid entity which remains on the face of the world map and the unyielding supports of the superpowers holds up this flimsy existence at any rate.

United States and its European allies never gave in their supports to the Israel and backed the felonies of Tel Aviv even in the most crucial pivots, such as the Operation Cast Lead of the September 2008 – January 2009 which led to the termination of Israel's diplomatic relations with four countries: Venezuela, Bolivia, Qatar and Mauritania.

Anyway, the international reactions to the latest brutality of Israel in a pre-dawn attacking to the civilians asleep in a humanitarian aids flotilla which included 700 peace activists from different nationalities was expectable and at the same time, unpardonably deplorable.

The Canadian Prime Minister Stephen Harper who has several times attacked Iran over its nuclear program has simply expressed his regret over the deaths and injuries which "occurred", shrugging off to the responsibility of the atrocious perpetrator and the architect of the massacre. "Canada deeply regrets the loss of life and the injuries suffered. We are currently looking for more information in order to shed light on what exactly happened." The ridiculous statement of the Canadian Premier reads. Canada is still looking for information about what has happened! Maybe the Israel Defense Force can answer the questions well! "They had not coordinated with us as to the shipping of humanitarian aids into Gaza, so we shot them killed in the morning."

The reaction of the other countries was not something of more value. Some of them summoned the Israeli ambassadors for clarifications, some of them regretted the death of civilians and sympathized with the families of the dead, some of them expressed their "serious concern" over the happening and the rest remained indifferent as the Israeli officials gave their strong backing to the massacre, leaving thousands of unanswered questions and bunches of ambiguity regarding the modality of international relations which make a fabricated state such as Israel so guaranteed and impervious to international regulations that nobody can stop it.

The NPT 2010 review conference in which 189 countries unanimously called on Israel to put its nuclear activities and facilities under the comprehensive IAEA safeguards was similarly responded arrogantly by Tel Aviv: We are not NPT signatory and thus we don't need its supervision, we want to possess our nuclear weapons to use them whenever necessary!

Anyway, the "international community" which in the most cases comprises the United States and its European friends who gave birth to this inauspicious child should tolerate the consequences of the great mistake they made 60 years ago. From the very beginning, it was clear that the establishment of the regime of Israel would be tantamount to insecurity, anxiety and disorder in the Middle East. Now Israel is expanding the frontiers of its aggressiveness and one can easily foresee the days when the European and American civilians are massacred by the Zionist regime, a simple instance of which we witnessed in the flotilla case.