Israel's international aggression: US thumbs up to state terror and murder

After days of conspicuous US absence from joining the rest of the world in unequivocally condemning Israel over its killing of civilians onboard the international convoy bringing humanitarian aid to the desperate people of Gaza, we now have the nauseating sight and sound of Washington defending the indefensible.

And, of course, the western media/propaganda machine can be counted upon to pump out plenty of misinformation fog to afford a cover of legitimacy to this charade by the White House and its criminal client regime in Tel Aviv. 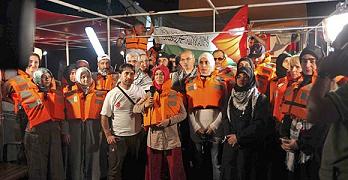 Here it comes – the White House whitewash of Israel’s bloodied hands – an odious act of complicity that flouts international law and sets the scene for more state terrorism and murder of civilians.

After days of conspicuous US absence from joining the rest of the world in unequivocally condemning Israel over its killing of civilians onboard the international convoy bringing humanitarian aid to the desperate people of Gaza, we now have the nauseating sight and sound of Washington defending the indefensible.

Following the assault by Israeli commandos on the six-ship aid convoy in international Mediterranean waters that resulted in at least nine dead and dozens wounded among the civilian aid workers – actions that were televised across the world – and then the illegal hijacking of these foreign-registered ships and the abduction and detention incommunicado of some 700 passengers from up to 50 countries, all that the usually oratorical US president Barack Obama could muster was a cowardly refrain: “We regret this loss of life”.

Adding insult to injury, his equally cowardly secretary of state, Hillary Clinton, says that her ever-so righteous government is supporting Israel’s call for an Israeli-controlled inquiry into the 31 May incident. Feigning a posture of moral probity and rectitude, Clinton said the inquiry must be “prompt, impartial, credible and transparent”.

How can an Israeli state inquiry into a clear case of Israeli murderous, international aggression be “impartial, credible and transparent”? This is like giving an accused mass murderer the role of judge and jury in his own trial.

And, of course, the western media/propaganda machine can be counted upon to pump out plenty of misinformation fog to afford a cover of legitimacy to this charade by the White House and its criminal client regime in Tel Aviv.

‘Furious debate over moment of attack,’ a headline in the Financial Times tells us. [1] The newspaper goes on to report Israeli government claims that its commandos were assaulted as soon as they boarded the main Turkish vessel, the Mari Mamara.

“Footage released by the Israeli army confirms that the commandos did come under attack, with one apparently thrown down on to a lower deck. Some were reportedly stripped of their handguns, which the army says were later turned on them,” says the FT.

The paper also quotes eyewitness accounts from aid workers that refute the above claims, and it intones its readers with an air of gravity: “What exactly happened during those crucial moments has become the subject of angry disagreement between Israel and the organisers of the flotilla.”

But this pretence of balanced journalism is utterly beside the crucial point.

What is happening here is the same sleight of hand that the White House is pulling in its attempt to whitewash Israeli lawlessness. That is, the setting up a two-sides-of-the-story scenario that will conveniently lead to claim and counter-claim, and inevitably doubt and digression from the central issue.

Pumping out even more fog, the Wall Street Journal states: “The Obama administration resisted its allies' calls to condemn Israel's raid on an aid flotilla headed to the Gaza Strip, with senior officials saying they were awaiting an investigation to determine who was responsible for the violence that killed nine civilians aboard one of the ships.”

Again, the question of who was responsible for the violence onboard the ships is completely irrelevant and deserves to be ignored with contempt.

The central issue is this: armed forces of the Israeli state forcibly boarded vessels that are the property of foreign countries while these same vessels were in international waters, some 150 kilometres off the Gazan coast; these ships were flying a white flag and had declared themselves to be a civilian convoy carrying humanitarian aid to the suffering citizens of Gaza; the convoy presented no infringement on Israel’s security and did not, nor intended, to enter Israeli waters.

This is the primary and only point worthy of attention – a crime of international aggression perpetrated by Israel.

Even if the civilians onboard those ships did respond in the way that Israel claims they did, that does not make an iota of difference. Under international law, they have the right to self-defence in the face of unprovoked armed aggression.

What is needed therefore is not an international inquiry, much less an Israeli-controlled inquiry, but rather a legal trial of prosecution against Israeli state terrorism.

Put it this way: can you imagine the scorn and opprobrium that would be poured on any government that called for an “inquiry to establish all the facts of who was responsible for the violence” in the aftermath of, say, the killing of civilians by Nazi stormtroopers during the Warsaw Ghetto uprising of 1943?

Anything less than legal prosecution – as the White House is now trying to avoid – is a whitewash of murderous hands. This is not only an injustice and insult to the victims of such violence. It is also in effect condoning the repetition of such crime with impunity, which is itself an act of criminal complicity.

But Washington’s role may not merely be an after-the-event complicity. Michel Chossodovsky has raised the serious question as to the purpose of US chief of staff Rahm Emanuel’s top-level visit to Tel Aviv just days before the attack on the Gaza Freedom Flotilla. [3] Why didn’t the US voice objections to the well-publicised Israeli warnings that its forces were going to (illegally) intercept the aid convoy? Did the US give a behind-the-door thumbs up to this assault? In that case, no wonder the White House is now endorsing an Israeli-controlled inquiry – confident and cynical that such a probe will lead to nothing of importance, not least the role of the US in this crime against humanity.

This has disturbing implications for the safety and human rights of all citizens labelled “pro-Palestinian activists” by Israel – regardless of their nationality and their jurisdiction. Emboldened by Washington’s complicity, Israeli government spokesmen are now talking about deploying even more aggressive actions against future aid convoys to the Palestinian Occupied Territories.

As the next humanitarian aid ship, the MV Rachel Corrie, makes its way towards Gaza, the international community must urgently demand the full application of law on the state of Israel and its Washington protector/accomplice.


* Finian Cunningham is a journalist and musician www.myspace.com/finiancunninghammusic