Tel Aviv deliberately invoked Al-Qaeda, the horrors of Auschwitz, and the tragic attacks of September 11, 2001 to demonize the Gaza Freedom Flotilla, but in so doing it has revealed its machinations and fabrications. 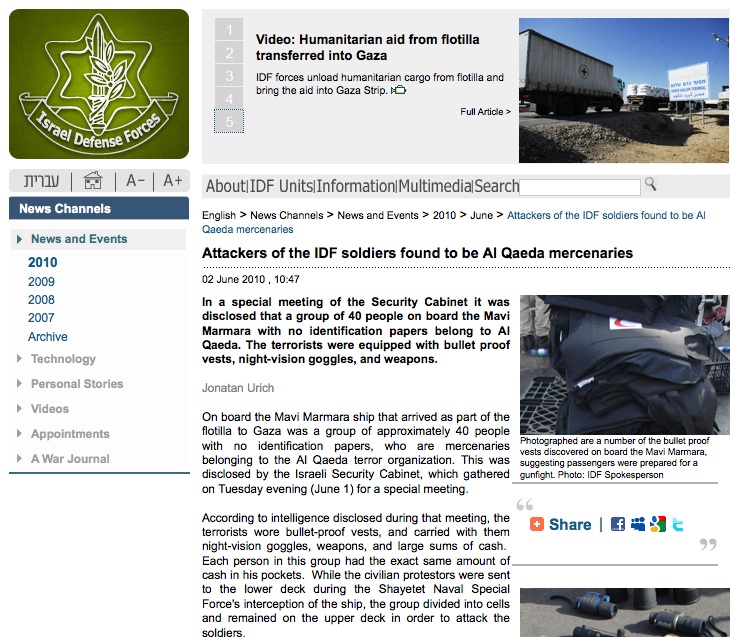 The attack and murder of international humanitarian activists, aid workers and a journalist by the Israeli military on the Mavi Maramara on May 31, 2010 in international waters is an unjustifiable act of aggression. It can be interpreted as either an act of piracy or as an act of war. Nor is this type of behaviour on the part of Israel new.

Israel could never justify forcefully stopping an international convoy of ships going to the Gaza Strip to help relieve the Palestinian people. This is why Tel Aviv deliberately instigated fighting with unarmed civilians on board the Mavi Maramara, fabricated evidence, and has hereto tried its best to portray the international group of civilians or some of its members as violent extremists.


False Israeli claims about Weapons on the Gaza Freedom Flotilla

Tel Aviv has turned reality on its head and tried to portray itself as the victim of the unarmed civilian group of international humanitarians, aid workers, and activists as the aggressors. Israeli officials have released pictures of standard ship equipment and kitchen knives collected from the Mavi Maramara. They claim that these were weapons being carried or smuggled by violent extremists. Even vests with clear Red Crescent symbols used by doctors, medics, and humanitarian workers of the International Red Cross and Red Crescent were presented by Israeli officials as proof that the members of the Gaza Freedom Flotilla were violent extremists.

The Guardian (Connolly, 3 June 2010 in an interview with Henning Mankell, the Swedish writer, gives an account of how the Israelis were categorizing anything that they could as a weapon:

“The soldiers checked the boat and one soon returned saying they had found weapons, Mankell said. ‘I have 24 witnesses to this, he showed me my razor, a one-time use razor, and a box cutter he’d found in the kitchen,’ Mankell said.”

The Israeli military has also overtly claimed that members of the Gaza Freedom Flotilla were linked to Al-Qaeda. Tel Aviv put out a press release on June 2, 2010 making such claims to the international media.

When asked by reporters Max Bluementhal (3 June 2010) and Lia Tarachansky what evidence the Israeli military had to support its Al-Qaeda claims, Israeli military officials replied that they had no evidence and that they were simply told by Benjamin Netanyahu’s advisors of Israel's National Security Council that the activists onboard the Gaza Freedom Flotilla had ties to Al-Qaeda. Later this was retracted and taken off the webpage of the Israeli military.

The Israeli military also released a doctored audio transmission in which unknown voices say “Shut up, go back to Auschwitz” and “We’re helping Arabs go against the U.S., don’t forget 9/11 guys.” Upon the release of the Israeli evidence, the organizers of the Gaza Freedom Flotilla strongly refuted the Israeli claim as doctored propaganda.

Firstly, the first release by Israel had no responses except a male voice saying “Negative. Negative.”

Secondly, in the second audio transmission the male individual(s) who made the comments never identified himself (themselves), but Israeli officials have confirmed that the response came from the Mavi Maramara.

Thirdly, from studies of these organizations, there is a standard radio response that humanitarian workers and activists have been systematically using when coming into contact with Israeli military vessels under which they identify themselves, state their intentions as humanitarians, and tell the Israelis they are peaceful and pose no threat. This standard response can be heard in the unedited Israeli version of the audio in which the speaker Huwaida Arraf also identifies herself as speaking for the Gaza Freedom Flotilla.

In the recording Arraf clearly says:

“Israeli Navy, this is the Freedom Flotilla. We are comprised of six motor vessels carrying only passengers and humanitarian aid destined for the Gaza Strip. We do not carry anything that constitutes a threat to your armed forces. Therefore, you are not justified in using any force against us. The blockade of Gaza is illegal under international law. We have permission from the Gaza Port Authority to enter. We repeat, we do not constitute a threat to your armed forces. You are not just..[radio interruption; the word she is using is “justified”] to threat unarmed civilians. Over.”

Following the well documented work of Huwaida Arraf and of these humanitarian organizations one would know that this has roughly been their standard response to the Israeli military. In the doctored Israeli releases almost all of this is cut out. All you hear in English is “Shut up, go back to Auschwitz”(unknown male voice), “We have permission from the Gaza Port Authority to enter” (Huwaida Arraf), and “We’re helping Arabs go against the U.S., don’t forget 9/11 guys” (unknown male voice) as an answer to the Israelis.

Fourthly, there is a big problem with the Israeli claim. Arraf was on the Challenger I and not onboard the Mavi Maramara. Many journalists caught on to this. Arraf makes things clear in an interview with Mya Guarnieri (6 June 2010):

“‘I was on the radio the whole time there was any communication,’ Arraf told Ma’an. ‘Mine was the only boat in which I answered and not the captain and they all answered in a very professional manner.’ Arraf told Ma’an that while she might have spoken of having permission from the Gaza Port Authority on a previous attempt to break the blockade, she is certain that she did not say it on Monday morning.”

The voice of Arraf was added from somewhere else. The audio is an extract from a past radio transmission. Under pressure, the Israeli military (5 June 2010) was forced to admit in an official press release that it had released an edited audio transmission to the international press and the world. In what amounted to little more than a failed coverup, the Israeli military (5 June 2010) press release states:

“This transmission had originally cited the Mavi Marmara ship as being the source of these remarks, however, due to an open channel, the specific ship or ships in the ‘Freedom Flotilla’ responding to the Israeli Navy could not be identified.”

While cutting out substantial and important points, the Israelis claimed that they edited and shortened the audio tape for listeners to understand. This is clearly false when the audio transmissions are studied.

In what amounts to a disgraceful bungle, the audio tapes were clearly doctored by the Israelis to frame the humanitarians onboard the Gaza Freedom Flotilla as violent bigots. The Israeli serviceman talking on the radio does not even say the exact same things in the different versions of the so-called transmissions. Before he says: “This is the Israeli Navy.” Yet, in the so-called unedited version the Israeli serviceman says “This is Israeli Navy,” with the word “the” missing. Moreover, even though the Israelis now claim they used an open line, no one else on the Gaza Freedom Flotilla heard any of these comments.

In the words of Haaretz, one of Israel’s major newspapers:

“The Israeli propaganda machine has reached new highs its hopeless frenzy. It has distributed menus from Gaza restaurants, along with false information. It embarrassed itself by entering a futile public relations battle, which it might have been better off never starting. They want to maintain the ineffective, illegal and unethical siege on Gaza and not let the ‘peace flotilla’ dock off the Gaza coast? There is nothing to explain, certainly not to a world that will never buy the web of explanations, lies and tactics” (Levy, 30 May 2010).

The Israeli government is lying and, from Lebanon to the Gaza Strip, this has been proven time and time again. Tel Aviv deliberately invoked Al-Qaeda, the horrors of Auschwitz, and the tragic attacks of September 11, 2001 to demonize the Gaza Freedom Flotilla, but in so doing it has revealed its machinations and fabrications. If this is the behaviour of Tel Aviv when dealing with a few hundred international activists and humanitarians, one can only imagine the treatment millions of Palestinians face under Israeli occupation.

Israel is the aggressor. It was the party that attacked the international aid ships and their civilian passengers. The passengers that fought back did so to protect themselves. Also, Israeli servicemen systematically attacked journalists and confiscated all recording devices to prevent the people onboard the ships from exposing Israeli aggression against unarmed civilians in international waters.

The Israeli-Palestinian Conflict is at a crossroad. What happened to the Mavi Maramara and the rest of the Gaza Freedom Flotilla in the international waters of the Mediterranean Sea is akin to the 1976 Soweto Riots that ended Apartheid in South Africa. A historic and very real opportunity is before us. The Gaza Strip and the Palestinians need urgent humanitarian aid. Not only do the Palestinians need to be saved from the brutal Israeli occupation, but the Israelis need to be saved from themselves too and the madness that is strangling their society. It is also from the example of the Palestinian people that the seeds of democracy will spread in the Middle East and in Arab countries.

Ordinary citizens across the globe will have to lead the way. Governments can not be depended on. It is time for the “Second Superpower,” which is the power of the people, to bring much needed change.