On Saturday afternoon the two Vodafone shops in Brighton (Churchill Square and Western Rd) were targeted by pissed off members of the public attempting to stop the criminal behaviour of this corporation (and their government chums) in dodging billions in tax while the public faces the worst cuts in generations. Both shops were close as a result. 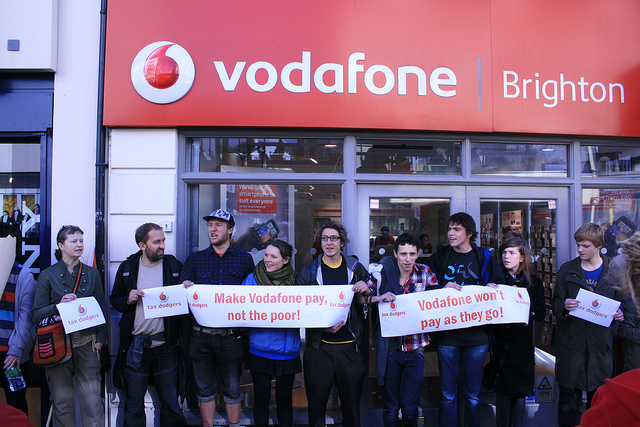 At the shop on Western Road the Sussex police decided on a somewhat different approach to their colleagues around the country (where dozens of similar actions were taking place) and after about an hour moved in and violently dragged off and arrested seven people (including two minors) one by one in an attempt to intimidate the rest into leaving.

After this failed to have its desired effect (with the remaining members of the public, mostly women, still sitting in front of the shop) and having attracted an even larger crowd of outraged passers by in the process the police appeared to reassess this tactic. Faced with the prospect of having to drag off some of the (even) more photogenic people, in front of a growing crowd of mostly very shocked and incensed passers by, they became considerably more accommodating and as a result the remaining people (joined by some very supportive passers by) stayed sitting in front of the shop until about 5pm.

The government has let Vodafone off at least £4.8bn in tax that it had still failed to pay for it's £112bn purchase of German mobile company Mannesmann in 2000. Given the close relation between the present government and Vodafone, with their finance director advising chancellor George Osborne on tax matters (!), this have more than a whiff of corruption about it. George Osborne has also been heavily involved in pimping Vodafone in a recent visit to India (a country where incidentally Vodafone also owe billions in tax, but are actually being force to pay it).

At the same time that ordinary people are facing horrendous cuts, UK corporations are failing to pay £12bn a year in taxes, and getting away with it. Corporate profits are back to pre-recession levels and the effective tax rate paid by the largest UK companies is 21% (and is set to fall to around 17% in the next few years as new corporate tax cuts take effect). Meanwhile FTSE 100 bosses have increased their pay by 55% this year, presumably to reflect the extra work they are putting in schmoozing with ministers to get sweetheart deals like this.