At 1pm on Monday 16th July a group of concerned citizens from Brighton and beyond will be attempting to inspect the EDO MBM factory in Moulsecoomb to further highlight the factory’s complicity in the murder of innocent civilians around the world.

It has long been known that this local company has links with illegal and immoral arms deals and Smash EDO intend to hold them to account. In January 2009 six activists broke in and successfully decommissioned the factory and then waited to be arrested by the police. At their later trial a jury found that their actions were entirely legal as they were acting to prevent war crimes against civilians in Gaza.

This mass action is part of an ongoing 'Summer of Resistance' which has seen almost daily actions by protesters against the factory in May and June and which will continue until the end of July.

Demonstrators will converge at the Level at 1pm.

A call has been made to FITwatchers to kettle the police and to sabotage their new tactic of using Police Liaison Officers to pacify the crowd.

The day before the demo anti-capitalists will be converging in Brighton for a day of plotting and scheming against the 2013 G8, to be held in the UK 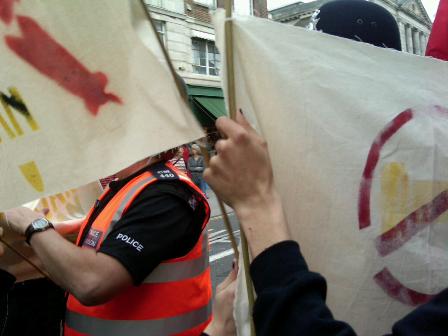 Here are the details and lead up events before the weapons inspection on Monday.

If you have portable sound systems, please bring them along to the action!

THE MEETING POINT FOR THE ACTION WILL BE THE LEVEL IN BRIGHTON AT 1PM ON THE 16TH OF JULY. The Level is the triangular park located between Ditchling Road, Union Road and Richmond Terrace in Brighton. Map: http://maps.google.co.uk/maps?hl=en&tab=wl

If you can, it would be useful to come as an affinity group to the demo, and we are looking for more people to do, for example, FIT watch during the day. However, it is fine to just show up on your own. We are holding a few meetings and workshops throughout the week if you want to get involved, or find people to team up with. Everyone welcome.

Sunday the 15th, 11am-6pm at Community Base, 113 Queen's Road, Brighton. Map: http://maps.google.co.uk/maps?hl=en&tab=wl . Convergence to build resistance against next year's G8 in the UK. See call-out below. If your group want to endorse the call-out, get in touch.

Sunday the 15th, 6.30pm at the Cowley: After the G8 convergence there will be a workshop on FIT watching techniques at the Cowley club. It is not too late to get involved in bothering the evidence gathering teams and keeping the police liaison officers out of the demo! No experience necessary.

Sunday the 15th, 8pm at the Cowley: An open meeting for anyone who has come down for the demo, or people who want to prepare themselves for the action. Everyone welcome.

PLEASE LET US KNOW IN ADVANCE VIA EMAIL TO SMASHEDO@RISEUP.NET IF YOU ARE LIKELY TO NEED CRASH SPACE DURING THE CONVERGENCE AND ACTION.

If you are coming from out of town, there are local contacts you can get in touch with in a few places:

PRESS RELEASE ABOUT THE JULY 16TH WEAPONS INSPECTION OF EDO/ITT:

And finally: Smash EDO are supporting the call-out for a mobilisation against the EDL in Bristol on the 14th of July.