In my role as Shadow Sussex Police and Crime Commissioner (SSPCC), I've spent the year scrutinising Katy Bourne's (SPCC) every move, and in doing so, doubts soon started to surface that Freemasons were playing a part in the decisions she was making. 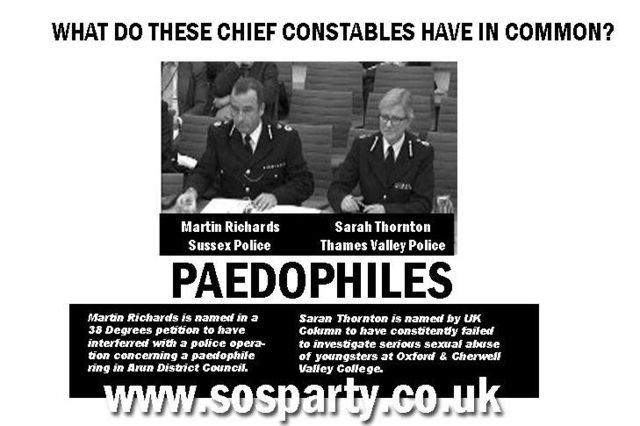 What do these Chief Constables have in common?

Well OK, it wasn't just me... Tony Gosling has been saying it, so too has Fabrice Bardsley, Michael Coughtrey, Charles Shoebridge, Jim Murphy and many more, whose names escape me at the moment.

In my role as Shadow Sussex Police and Crime Commissioner (SSPCC), I've spent the year scrutinising Katy Bourne's (SPCC) every move, and in doing so, doubts soon started to surface that Freemasons were playing a part in the decisions she was making.

Having asked the question, Is Simon Kirby MP an Freemason? It came naturally that I should ask the same of Katy Bourne. After-all I reasoned, how else could someone with her zero experience of public office become the Sussex Police and Crime Commissioner, without being a Freemason?

Katy Bourne said an interesting remark while appearing at the Police and Crime Commissioner Home Affairs Committee on 7 Jan 2014, “Call me old-fashioned,” she said, “but that is just how I was brought up. Coming from my business background, when people get to a certain position, they don’t usually get there just because they won it on a lottery ticket.”

I should point out that her Chief Executive Monitoring Officer, Mark Streater, who earns £82K a year, after having spent 30 years working for Sussex Police, was sat behind her as she said it.

Jobs for the Boys.

Perhaps her remark would have been more accurate if she said, “Call me old-fashioned, but that is just how it is. Coming from a freemasonic background, when people get to a certain position, they usually get there just because they are a freemason.”

Hey, don't just take my word for it. This is what Paul Flynn, the Labour MP for Newport West asked Katy Bourne as the last question of the session.

“Are you conscious of a situation in which someone appoints a pal of his, who is a fellow freemason, for instance, or someone who served with him as a fellow policeman, without any kind of advertising or interviews with people? That is what brings the office into disrepute.”

To which Keith Vaz, the committee chairman, wrapped up the proceedings with, “Thank you. That is a very clear answer.”

Though I also have serious concerns of Keith Vaz's suitability to chair any kind of Home Affairs Committee.

Our contention that Freemason's have been infiltrating public offices, from politics to judiciary to police, was confirmed with the leaked Tiberius report.

In two separate articles published by the Independent Newspaper, the truth of Freemason's have been exposed once and for all.

Written by Tom Harper, Investigations Reporter and published on Monday 13 January 2014, one headline raged, “Revealed: How gangs used the Freemasons to corrupt police.”

Confirming nearly word to word what we already know, the opening sentence said it all, “Secret networks of Freemasons have been used by organised crime gangs to corrupt the criminal justice system, according to a bombshell Metropolitan Police report leaked to The Independent.”

Operation Tiberius, written in 2002, found underworld syndicates used their contacts in the controversial Masonic brotherhood to “recruit corrupted officers” inside Scotland Yard, and concluded it was one of “the most difficult aspects of organised crime corruption to proof against”.

The author of Tiberius, which was compiled from intelligence sources including covert police informants, live telephone intercepts, briefings from the security services and thousands of historical files, came to the desperate conclusion: “Quite how much more damage could be done is difficult to imagine.”

The article concluded: “Witnesses terrified into silence, dodgy jurors, bent lawyers, bent policemen and bent CPS clerks – all are part of the same cancer eating away at justice. A cure for the malady will not be easy to come by. Perhaps we should begin by acknowledging that the patient is sick.”

A Cancer eating away at Justice.

While Scotland Yard said: “We will not tolerate any behaviour by our officers and staff which could damage the trust placed in police by the public. We are determined to pursue corruption in all its forms and with all possible vigour. All such allegations and intelligence are taken extremely seriously,” it is obvious that more needs to be done.

As made crystal clear with a Daily Express headline: Shame of the 4,000 ‘bent coppers’ as police crime soars.

MORE than 4,000 police have been sacked, forced to resign or otherwise disciplined for criminal offences in the past five years, shock figures reveal.

One officer was caught with sub-machine guns, while others brought shame on their forces with sex crimes, drug trafficking, fraud and domestic violence.

More than 100 of them held the rank of inspector or higher.

Criminality in the ranks is a growing problem, data disclosed by 34 of the 43 police forces in England and Wales showed.

Which is why the Good cops must Police their own Ranks.

In light of the Tiberius report, Bill Maloney's evidence that, “police are corrupt to the hilt,” and my own investigations into the Katrina Taylor murder cover-up and Brighton's Scandal, the bottom line of defence must be the good cops in the UK's police force.

With the final report of the RSA Independent Review of the Police Federation of England and Wales is published today, the report raises concerns:

1. Lack of openness and transparency about its affairs and finances.
2. Weak accountability to members and the public.
3. Inability to promote good behaviour and professional standards.
4. Internal divisions that have hampered its effectiveness and reputation.
5. Lost of confidence and lose of influence in representing its members.

This again illustrates the need for good police officers to police their own ranks and arrest the bent coppers in their mist.

The UK's Police Forces are losing the confidence of of the UK's public to serve and protect them.

The public perception of corporate enforcement officers, doing the dirty work for corrupt public institutions and corporations has been proved to be correct on dozens of occasions.

“We have an international paedophile ring operating in every democratic government on our planet!”

And then there's the taboo subject of paedophilia in the police ranks. Do you think I like bringing this up?

Referring back to a question Louise Collins from the UK Column News asked Bill Maloney, “Do the police and security services have knowledge of what's going on?”

The horror that our illustrious Queen has been named in an international paedophile ring is sending shock waves through-out her Kingdom. Speculation is rife that Lord McAlpine committed suicide because, he above anyone, knows the media storm which is about to hit the Establishment.

The House of Cards is Crashing Down.

Now is the time to jump ship and position yourselves for the New World Order, waiting around the corner.

The Stench of Perversion is Unbearable.

There will be hundreds of senior positions opening up for the good cops to fill. Now is the time to make up your mind. You are either with us or against us. You are either a good cop or a rotten cop.

As Scott Chambers said on Facebook, “Only good men can rid the world of evil and it's about time we showed them how far over the line they've come.”