Wave of UK protests to mark anniversary of Fukuhima disaster

Opponents of nuclear power will be converging all over the UK to mark the third anniversary of the ongoing Fukushima disaster - and to highlight the precarious state of Britain’s own nuclear reactors. 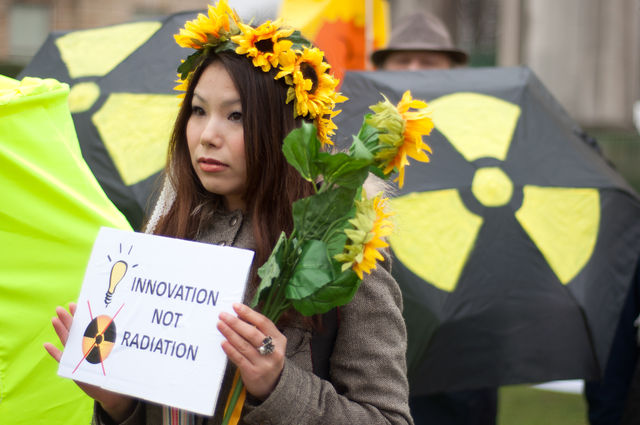 Protester calling for an end to nuclear power

A recent Defra report revealed that 12 of our 19 civil nuclear sites are at risk of flooding and costal erosion. Of these, 9 sites including Sizewell and Hartlepool nuclear power stations, are at immediate risk, the report concluded.

During the recent storms, residents in Morecambe Bay were alarmed to see waves breaching the flood defence wall of Heysham nuclear power station. On the third anniversary of the Fukushima tragedy (Tuesday 11th), they will be holding a vigil and presenting their fears about flooding and related radiation leaks to the plant’s operator, EDF Energy.

And while the stricken Fukushima Daiichi reactors continues to emit high levels of toxic radiation, there is growing concern about the increasing instability of the Europe’s ageing reactors. A new Greenpeace report warns that we are entering a ‘new era of risk’ as governments begin to extend the life of nuclear reactors beyond advised safety limits.

Camilla Berens, spokesperson for the Stop New Nuclear Alliance, says lessons must be learned from Fukushima. ‘Our hearts go out to the thousands of people affected by the ongoing disaster in Japan,’ she said. ‘If the Japanese nuclear industry can’t protect people from radiation poisoning, then no country can. The UK’s power stations are growing increasingly decrepit and our climate is getting more unpredictable. It’s a very worrying combination. We must take the lead from Germany and develop a new mindset for sustainable energy provision.’

In London, a meeting will be held on Monday evening at the Houses of Parliament to discuss the effect of the Fukushima disaster three years on. A free concert for Japan will be held at St John’s church, Waterloo, on the 11th, followed by a vigil will outside the Japanese Embassy. A march will also take place through central London on Saturday 15th. Internationally, protests will be taking place in Japan, USA, Canada, Australia, Poland, Germany, France and Spain.

Last week, 56 people were arrested across six European countries after 240 Greenpeace activists took part in actions calling for ageing nuclear powers stations to be closed down.

ENDS
Notes for the editor:
For more details on the UK protests, contact Camilla Berens on: 07811-451417
Defra’s report was leaked to The Guardian in 2012:

http://out-of-age.eu/
A list of international demos can be found here:

http://fukushimathirdanniversaryevents.blogspot.co.uk/
Details of Greenpeace’s European day of action can be found here: