Who is Graham Cox?

Graham Cox is the Conservative's Parliamentary Candidate for Hove & Portslade in Brighton.
The only problem that seems to stand in Graham Cox's way, is that a lot of people in Brighton despise him?
The question needs to be asked why?
Why do so many people despise Graham Cox? 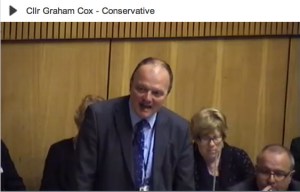 Born Graham Parrott, Graham Cox, ex Sussex Policeman and ex City Councilor, is putting his past behind him to stand as the parliamentary candidate for Hove and Portslade in Brighton 2015.

Championed by the Brighton and Hove Conservative leader Geoffrey Theobald as an up and coming hero of the local Tory party, Graham Cox was favoured above all others and was duly elected the Westbourne councillor in Hove in 2011.

As he tells us on his ‘about me’ page of his election campaign website.

“I served the Sussex Police for 30 years, and for much of that time was a detective in Brighton and Hove. The highlight of my career was a very happy time spent as the Divisional Commander (Superintendent) in charge of Hove - both my home town and the place where I have lived for most of my adult life - implementing a much welcomed policy of reintroducing visible street policing to the streets of Hove and Portslade. My career in Sussex ended as the Detective Chief Superintendent in charge of Sussex CID, leading a highly skilled team of police officers and support staff responsible for investigating all murders and serious and organised crime across the county.”

Let’s have a quick recall before we carry on:

I asked for a recap because the dates don’t add up.

Contrary to the official version in which he would have us believe, he served in all ranks up to Chief Superintendent during a 30 year period, but the dates suggest otherwise.

On his ‘about me’ page he tells us he joined Sussex Police at 18.

“I left school at 17, working firstly as a sales assistant (in rapid succession at BHS, the Co-Op and Debenhams) before joining Sussex Police at the far too young age of 18!”

We also know that he served with Sussex Police from 1981 to 2007, serving every rank up to Chief Superintendent.

“I served the Sussex Police for 30 years, and for much of that time was a detective in Brighton and Hove.”

Well if that was the case his CV should read-

Employment: Sussex Police 1981 to 2011- Serving all ranks up to Superintendent.

1981 to 2007 is 26 years not 30. There are 4 years unaccounted for. Four years before being illegible for a maximum police pension.

Graham Cox served for 26 years and rounded it up to 30.

Thus raising the question, why did Graham Cox leave Sussex Police four years before he was supposed to? And why is he lying about it?

Martin Richards, the ex Chief Constable of Sussex Police stepped down nine months before he was supposed too.

Remember that in December 2013 the Sussex Police and Crime Commissioner Katy Bourne, extended his contract for a further year to October 2014.

Only for Martin Richards to suddenly step down as Chief Constable in February 2014, nine months before he was supposed too.

Thus it would appear quite common for Sussex Police employees to step down early from their retirement dates, to then go on to receive their full pension entitlement.

Try as one may, getting a clear picture of when exactly Graham Cox’s left Sussex Police, isn’t as easy as it sounds.

We know of his achievements:

All this information is easily accessible from the public record, but still the dates don’t add up.

When did he leave Sussex Police?

What do we know of his sins? And what kind of a policeman was he?

While it’s been demonstrated on many occasions that Sussex Police promote failure and incompetence, it would be prudent at this point to take a moment and examine what Graham Cox actual did in Sussex Police.

He pioneered the reintroduction of visible uniform policing which tackled low level signs of disorder.

“Some readers of Brighton & Hove Independent may recall my time as the Superintendent in charge of Hove, when we pioneered a more visible form of street policing in which patrolling officers dealt with matters that were previously written off as just minor misdemeanors – such as:

Typical of a Conservative to pick on the small guys, while allowing the Crime Lords free reign.

It’s well documented in the Joe Neilson Crime files that Sussex Police worked alongside Crime Lord Marcel Sulc, giving him and his gang of criminals free reign to peddle drugs, commit fraud and murder across Sussex.

Karina Taylor was murdered by Marcel Sulc’s gang in 1996, and according to the Neilson Files, Graham Cox would have been in the thick and thin of the Katrina Taylor murder cover-up.

I expect if someone devoted the necessary hours of research, they would find a pattern in that more serious crimes went unsolved, unreported and uninvestigated under Graham Cox’s governance, as a direct result of directing all his resources to arresting anyone who threw an apple core into the bushes, or drank a can or four of Special Brew, to the kids riding their bikes on the pavement, too scared of the traffic to ride on the roads and anyone else whom a police officer deemed was partaking in disorderly behaviour.

For my penny’s worth, I believe the community must police their own petty crimes, (as I spelt out in the Police and Crime Commissioner elections- Citizen’s on Patrol,) leaving the professional police, the more serious task of tackling crimes such as:

As I made clear in my previous exposé of Graham Cox.

“Graham the Crook-Cox will be a perfect addition to the kapo ranks of the Nasty Nazis party because he’s proven he’s willing to turn a blind eye to the serious crimes that effect society.”

Why are people out to get him?
Why are insidious stories circulating through the political grape-vine calling Graham Cox a crook, a menace and a nasty little bastard?
Why is Graham Cox hated and despised of so many people he calls friends?

Could it be that with only four years to go before retirement, Graham Cox was caught out, exposed as a rotten apple, a corrupt cop?

With a variety of scenarios to choose from, it can only be left to the imagination.

Whatever the reason for leaving Sussex Police, it’s alleged by certain members of the Brightonian political elite, that Graham Cox was sacked from Sussex Police under a cloud of shame and criminality.

As a member of the public asks, illustrating perfectly the distain and ridicule which the voters of Brighton hold towards Graham Cox.

“Can you ask Cox if this deputizing actually meant sitting in his office whilst the chief was on holiday, or going to give out the prizes at a local school when the Chief couldn't make it?”

I expect Graham is eager to step forward from behind the shadows and enjoy the lime-light for himself.

WHATS NEXT FOR GRAHAM COX?

‘Onwards and upwards,’ seems to be his war-cry.

Having enjoyed the £85,000 a year salary of being a police chief, Graham Cox is evidently relieved to be given the opportunity to dump the £11,000 a year councilor allowance for the more comfortable MP salary of £74,000 a year plus the same again in expenses.

Facing a formidable opponent in the guise of Labour’s Peter Kyle standing as prospective MP for Hove and Portslade, it’s far from a forgone conclusion that Graham Cox will win…

Then again there is always the £85,000 a year post of Police and Crime Commissioner up for grabs in 2016.

COMIN UP NEXT: IS GRAHAM COX GUNNING FOR KATY BOURNE’S JOB?

Why did he leave Sussex Police four years early?
How much time is he devoting to his Parliamentary Campaign, while at the same time continuing to claim expenses as a Westbourne Councillor?
If he fails to become a MP in 2015, would he contest the Police and Crime Commissioner elections in 2016?

I expect Graham Cox will remain silence. Because he knows that whatever he does say will be taken down and used against him in a Court of Law.