WARMONGER AND THATCHERITE POWER-GIVER Rupert Murdoch nailed his colours firmly to the mast by supporting #Brexit. His rightwing populist newspaper has supported Britain's withdrawal from Europe since the last election, running one hatemongering racist populist campaign after another. Announcing the Pope is indeed Catholic and bears poo in near trees, should be a wake-up call for any hopeful, wool-over-their-eyes Labour #Brexiteers who think an independent Great Britain will magically herald a socialist government. Unless another Tony-Blair-style Blue Labourite takes charge of the opposition, Labour will never be elected to no10, with or without the seats lost to the SNP. Rupert Murdoch has decided the outcome of all British prime-minsterial elections since Margaret Thatcher as the publisher of Britain's best selling newspaper, and should a general elections be held anytime after #Brexit, the oppressive Australian tax avoider will ensure that once again the Tories win the election outright with Boris Johnson in-charge, or in coalition with UKIP which would be the ultimate fascist nightmare, handing tangible power in return for the Sun "News"paper backing #Brexit to the biggest arch-villain of all - Rupert Murdoch.

VOTE LEAVE, MASOCHIST PUBLIC, AND ENTER TO THE #BREXIT DUNGEON! 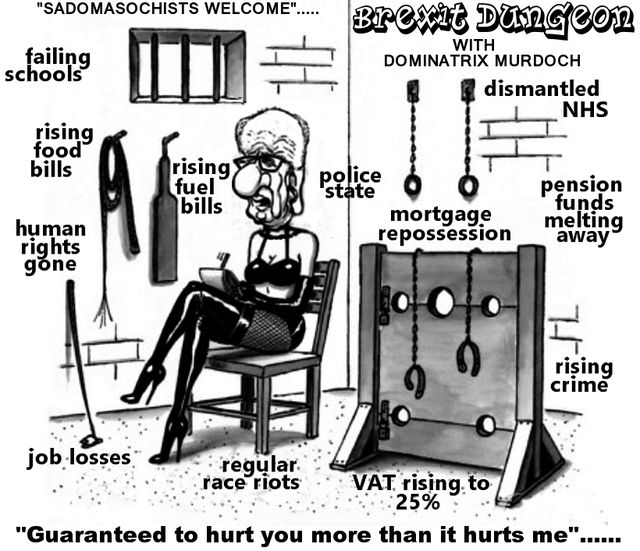 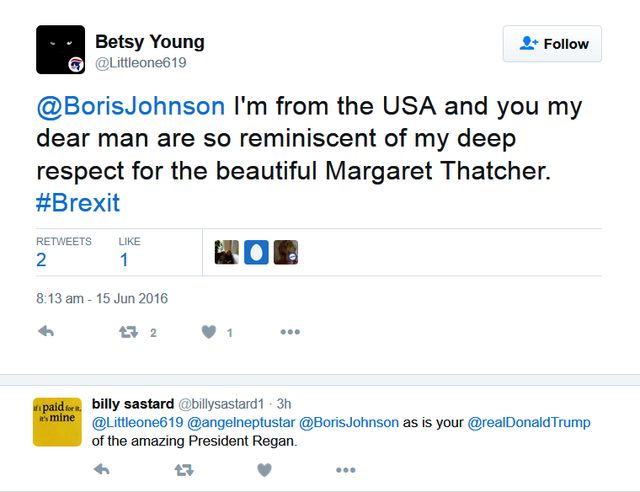 Murdoch wants a rightwing one party state blinded with hate, rampaging EDL and Britain First-style groups ready to keep social reformers preoccupied whilst the evil Australian arch-villain continues to destroy society, along with the owners and editors of the Daily Express and the Mail. A crony capitalist state along the lines of Putin's Russia run eventually with an iron fist and a floppy blond barnet. Small wonder Putin supports rightwing Eurosceptics including hardline Thatcherite Tories and far right UKIP bigots, knowing a criminally corrupt and racist Britain can never take the moral lead against a racist and homophobic criminally-corrupt Russia.

Some people are questioning how in a modern, technological literate world can an old-fashioned printed rag of chopped-down and pulped tree trunks can influence the way people vote - the answer, as Mr Goebbels himself would be the first to acknowledge, is the false assumption that a "news"-paper is a deliverer or news and not toxic rightwing political opining masquerading as news. If millions of immigrants are about to "flood" into Britain from Turkey, in a blatantly falsified story, or a banana is to be apparently banned for its shape, to the eyes and minds of many, anything printed via old-fashioned printing presses has to be true, no matter what a steaming pile of fabricated bullshit it actually is.

Facts are unsexy, boring, and send a dumbed-down working class public into slumber. They expect non-lubricated nine-inch anti-working class populism sadomasochistically rammed repeatedly down their throats until they cum-cough up blood-laden vengeful bile, singing from the hymn-sheet of mogul-manufactured hate. Whilst the internet does divulge the true facts about the real world, such as the financial benefits of immigration to society, few ordinary people, no matter how young or old the surfer, will click on a Guardian story, and fewer still an anti-racist blog, no matter how much we would like them to. Discovering that immigrants are not stealing your jobs, will not titillate, nor will it enhance one's breast size, dish up the "goss" on television celebrities, or save you £5 off your bill at Lidl.

The Labour MP for Barking, Margaret Hodge, discovered much to her dismay and indignation that hard-done by, downtrodden people gravitate towards easy targets, no matter how racist, vile and ultimately untrue they are, just as what happened in Nazi Germany when newspapers wholeheartedly blamed Jewish people for all the ills of the world. Bigotry is easy to absorb.... no complicated thinking for Mr Angry to quietly contemplate. Not that most if not all, knew in their heart of hearts that what the tabloid media publish is true.

MP Margaret Hodge tried repeatedly to explain how EU immigrants don't steal council houses, and the recession was caused a banking mess-up and not by asylum seekers, but nobody targeted by xenophobic tabloid newspapers wants to believe the truth, a sad sign of hot-headed thinking pushed upon vulnerable people seeking easy targets. It must be stressed, Reactionary attitudes are not an issue of intelligence or schooling, as bigots come in all shapes, sizes, colours and social class, however people at their wits end, who cannot paid their landlord or gas bill, instinctively seek visible targets to scapegoat their angst, and papers such as the Sun, Mail and Express create racial enemies for the white working class to take out their anger upon, deliberately destroying any prospects of class solidarity. Instead of hating millionaire tax-dodging parasites, those with nothing are actively encouraged by oligarchs like Rupert Murdoch to turn their fury towards the refugee, the Polish plumber, the religiously-dressed Muslim, scared shitless than one day, socialism would make a popular return.

As long as gutter printing presses keep rolling, and nationalist editors keep typing hate into headlines and opinion columns, working class attitudes will continue to be subverted by extreme capitalism, in such a way absolutely apparent through the #Brexit campaign. Instead of the NHS, or jobs, or ultimately, the economy being the battleground, it is the engineered fear of immigrants that is continually drip-fed into the minds of vulnerable people on the breadline. Murdoch, Dacre and Desmond are ultimately responsible for hate-crimes, racist assaults and even racist murder, the recent attacks on taxi drivers in Rotherham, the direct result over media's anti-Asian Muslim campaign accentuated by groups such as the English Defence League, Pegida, the NF, the NWI/ NEI/SEA and Britain First, who feed off tabloid hate and turn angry typeface into bloody hate crimes on the streets of Britain today.

To step up the Cold War, and keep "liberal pinkos" out of office in the USA, "anti-Communism" was championed as a bulwark against Communism and socialism. Whilst the name suggests a simple championing of free market economics at philosophical level, in reality, "anti-Communism was a CIA-run campaign of support for extreme socially rightwing regimes operated by SS veterans who switched sides to link up American secret forces with neo-Nazi groups throughout Central and South America, via Operation Condor which directly funded "Contras" (counter-revolutionaries) from Argentina to Peru, Chile, Nicaragua, and Columbia. Anti-Semitism, anti-native-American, and anti-black racism flourished throughout Southern American countries as a result of the USA's meddling, which was fostered to keep socialist politics from taking a foothold in the continent via gun, bomb and death camp.

In the USA itself, African-American emancipation, and the mutuality between socialists, communists and social reformers with the black civil rights movement, was countered with a well organised anti-black rightwing media agenda, but CIA anti-Communism also funded fundamentalist rightwing Christian groups which are still around today. Whilst Malcolm X was "Public Enemy Number One" and Muhammad Ali was castigated as being un-American for refusing to fight in Vietnam, behind the scenes, the CIA linked up with the Mafia, and white supremacist groups such as the KKK to intimidate black and Hispanic populations, both the mafia and organised white power groups infiltrating police forces up and down the country which already were majority racist, especially in the South.

Whilst away from Trump hate rallies, Black Lives Matter to many, the operative machinations of anti-Communism, racist policing, the KKK, the extremist rightwing churches and such like, have not gone away, and have instead become entrenched in every day life, boosted by the rise of Islamophobia, championed by "Conservative" Christian Rapturists who openly support Israel whilst not-so publicly) not liking Jewish people, the Henry Jackson Society powering thousands of social media trolls who tweet and Facebook-post in favour of EDL, Britain First and Pegida. Click on the profiles of American #Bluehand trolls with borrowed photos of models in bikinis, and you will see the same bios, time after time -

The Council of Conservative Citizens is a far right, neo-Nazi KKK-linked group, much like Stormfront, but its use of the word "conservative" out of its original British context, allows fascists to blur the lines between fiscal capitalist economics and hardline white supremacism. Fascist "conservatives" such as Pamela Geller are now targeting British Conservatives (with a capital C) across the pound through support of UKIP and #Brexit. Just why Henry Jackson Society neo-fascist trolls would seek to influence British elections when their primary focus was meant to be in America, is difficult to muster, however one thing is for sure, Rupert Murdoch, proprietor of Fox News has an international vested interest in crushing socialism worldwide. By turning white Brits against Muslims and immigrants, Murdoch can divide and conquer, xenophobic racial conservatism creating a suitable distraction for fiscal conservatism to run amok.

Murdoch's Sun Newspaper has influenced the outcome of every general election in the UK since the rise of Maggie Thatcher, and as stressed earlier, printed words still have years ahead before the internet makes hard copies redundant, especially amongst commuters on tube trains and buses, and manual workers who glance daily at headlines in greasy spoons and pub newspaper racks. A Murdoch-engineered #Brexit is yet another victory for the megalomaniac from Australia, the manner of which should set the alarm bells ringing in the minds of Labour Leave.

Whilst pro-#Brexit trolls will argue the fantasy, on the flimsiest of premises that freedom from Europe will give the Labour Party the opportunity to govern, come a rushed general election driven by a post-Brexit vote of no-confidence in David Cameron's leadership. Anybody who seriously believes Old Rupe will hang back and allow this to happen, especially as he plans to one day take over a privatised BBC, is living in Cloud Cuckoo Land. The only Labour victory since 1979, came courtesy of the betrayal of socialist standards came courtesy of Blue Labour, and with it, a widening disillusion in politics in Northern heartlands which allowed the rot of BNP and later the EDL and UKIP to gain traction. With many counties solidly blue since time began, and the rightist media deliberately lining-up Nigel Farage's UKIP as a protest vote and future rightwing coalition ally all-in-one, there is more chance of San Marino winning the next World Cup than a socialist Labour party winning power, so long as Rupert Murdoch, Dacre, or Desmond, or their successors remain alive.

With a majority of Scots now backing a second Scottish Independence Referendum on #Brexit, England will be locked into a Thousand Year Tory Reich, if we leave Europe, all safety nets moderating harsher than harsh Thatcherism, lying screwed-up in the dustbin. To make it worse, in an increasing climate of intolerance, another Murdoch-generated Labour poll failure, will help Blue Labour come to the fore, once more, encouraging more Northern Labour MPs along the lines of spanking fetish fascist Simon Danczuk to unleash their inner Bernard Manning, making themselves indistinguishable from UKIP.

Vote #Brexit and say bye-bye to what remains of affordable housing, cheap food, the NHS, free pre-schooling, the right for trade unions to organise strikes, public demonstrations (except by EDL/ BF/ Pegida-types), freedom of choice, freedom of religion, and everything else you hold dear in British society that wasn't already lying dead in the gutter thanks to Thatcher, Blair, or David Cameron. Say hello to homeless, fracking here, there and everywhere, worsening climate change, a return of bloodsports, sickness for those without private medical insurance, a police state with widespread zero hours contracts, no health and safety at work, no legal help to sue large companies, and a police service that isn't a service at all, but is there to bully the last drop of resilience out of you, Life on Mars-style.

Vote #BREXIT, and ensure life will be not worth living for yourself and future generations.

Once #brexit happens, xenophobia and rightwing politics, and ultra-capitalism, not forgetting Murdoch himself, will lie, corrupt and destroy any future hope of a Labour government.

BORIS JOHNSON AS PM - will spell disaster for all working and middle class people, whilst billionaires will be laughing all the way to the bank. Billionaires like Rupert Murdoch, who told you to @voteleave, which you regretfully, and sado-masochistally obliged.