A broad based community campaign is promised to defend Swindon teenager Inna Haville from deportation to the Ukraine. Swindon Trades Union Council (TUC) has voted to support a launch meeting for the campaign on Tuesday 16th December, 7:30 at the Friends meeting House, Eastcott Hill Swindon. 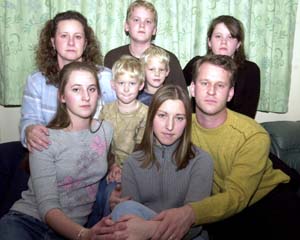 Swindon Trades Union Council (TUC) are calling on all Swindon Trade Unions, political parties and faith communities to support the campaign, and to write to the Home Office asking that Inna be allowed to stay in Swindon on compassionate grounds. The Haville family are backing the campaign.

Swindon TUC supported the successful campaign against the deportation of local grandmother Mumtaz Begum between 1995 and 1997. Mumtaz Begum’s case was supported by the Bishop of Swindon, the leaders of Swindon’s Moslem community and local political figures ranging from then conservative MP Simon Combes to Labour council leader Sue Bates. Mumtaz’s case also won support from Swindon trade unions like MSF and Unison, who provided vital financial assistance. The campaign gained widespread support throughout Swindon because Mumtaz was 66 years old, and had a heart condition. Had she been sent to Pakistan she would have been homeless as she had no family in that country. After losing all legal appeals Mumtaz Begum went into hiding until the Home Office changed its mind and allowed her to stay on with her family in Broad Street.

I was the secretary of the Mumtaz Begum Must Stay campaign and there are many similarities between the two cases. We defied the govenement over Mumtaz and we wn, so the Haville family still has grounds for hope.

Should Inna be sent back to the Ukraine, a country she left as a bewildered child, she would have no home, no money and no way to support herself. A young woman like her would be extremely vulnerable in that situation, and I fear what would become of her. Inna’s family are not asking for any handouts from the tax payer - they want to support her and she will be a valuable, productive member of our community. Like with Mumtaz Begum, all legal avenues are now closed, and we have to rely upon influencing the government ministers to show compassion.

We need to convince the politicians that there is a strong feeling in Swindon that Inna must stay. She already has the support of her MP, Michael Wills which is excellent, and she has the support of her Christian community, which also helps. The Mosque is also lending its support. Swindon has a proud tradition of welcoming people, there are hundreds of families with roots in Poland, Italy, Pakistan and elsewhere happily living here. We successfully defended Mumtaz Begum, now we must defend Inna.

You canhelp by checking out the family's web page and writing a letter to the home office.
David Blunkett, Home Office, Queens Annes Gate, London.