On Wednesday around 400 people packed into the College Green hall in the centre of Bristol for a rally in support of sacked Rolls Royce trade unionist Jerry Hicks. As well as activists from Jerry’s union Amicus there were representatives from the NUJ, NATFHE, T&G, RMT, CWU, NUT, AEEU and the FBU. Not a bad turnout when you consider that it was mid August and most people are on holiday. 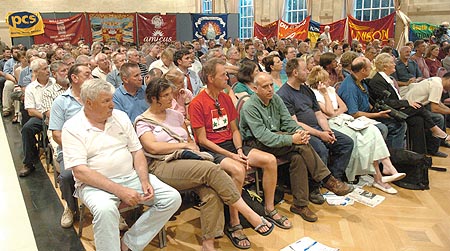 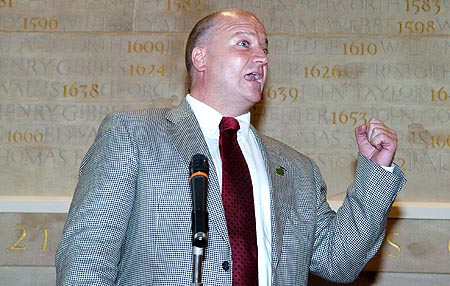 Bob Crow challenges all bosses, bureaucrats and bourgeosie to a punch up! 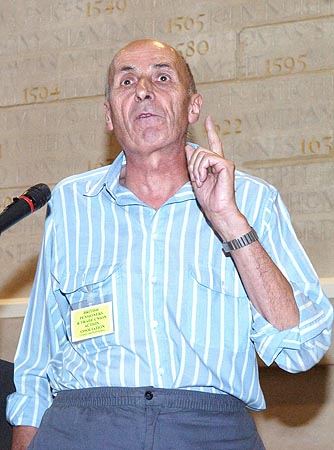 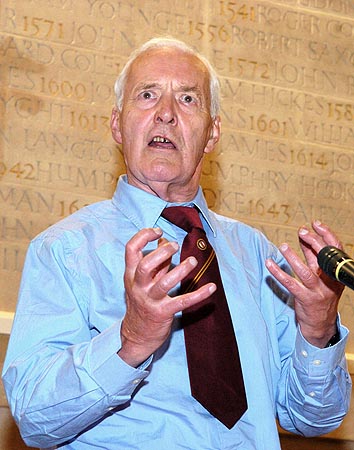 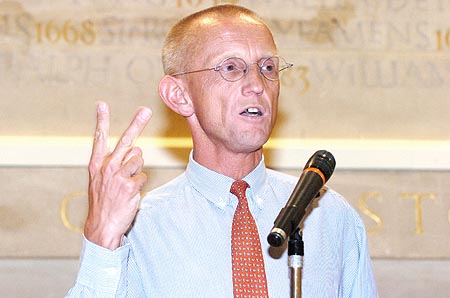 Jerry Hicks responds to attempt by Rolls Royce bosses to buy him out. 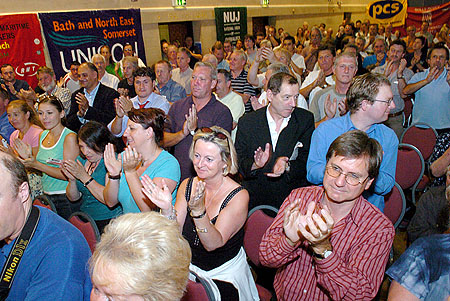 The first speaker was Bob Crow general secretary of the RMT who immediately made the link between the Rolls Royce dispute and the action at Heathrow airport. Bosses attacking trade unions triggered both disputes and both had seen unofficial (i.e. illegal) action by workers as a result. Crow quite rightly pointed out that with the anti trade union laws that were created by the Tories and strengthened by New Labour it was impossible to take any effective action against the bosses without breaking the law. He also pointed out that it’s all very well for the TUC leadership to lay wreaths at Tolpuddle every year to commemorate the martyrs but where were they when their support is needed at Bristol and Southall?
Next up was Alan Watkins a life long trade unionist and friend of Jerry Hicks now retired. Alan who was convener at the Coventry Rolls Royce plant for many years told the meeting how even retired members relied on the union. Rolls Royce could easily introduce cuts to the pensions being collected by its former workers if the present union was not there to stop them. Any successful attack on present workers could easily have repercussions for ex employees.
Tony Benn who was the MP for Bristol East for many years until the seat was done away with concentrated his attacks on the Labour Party and its total failure to anything of note since winning power in 1997. It’s hard to understand why he remains a member of an organization that he seems to spend his entire life slagging off.
Finally Jerry Hicks took the stage to tell of the history of the dispute. How his sacking is little more than vindictive revenge from a management who resent the fact that he successfully defended two workers that they had previously tried to sack. Since his sacking an ‘Interim Relief Hearing’ has ruled in his favour and accused Rolls Royce management of holding ‘Institutionalised Animosity’ towards Trade Unions. Rolls Royce have tried to engineer themselves an exit strategy by offering Jerry £50,000 to go quietly. He has refused. Unless he is unconditionally reinstated by next Monday the entire test area (an essential part of the factory’s operation) will go on indefinite strike. A march is planned for 2nd of September 1pm College Green in Bristol.
Unless of course Jerry has won and been reinstated by then.... .

please tell me again why

http://bristol.indymedia.org/newswire.php?story_id=24141&show_comments=true
Aperently the Bristol factory produces and services engines for military aircraft, such as the Eurofighter Typhoon, the Hawk and the Harrier so why is anybody supportig these people, they are part of the machine that kills and maims countless people around the world.
They should be ashamed of themselves for producing these things, what can they possibly say to justify being paid to help lay wste to others livlyhoods and neibourhoods.

How clean are your hands, pixie?

Does the work you do not oppress anyone? Were all the things you buy made by free and environmentally sustainable labour? Or are you, like everyone else (including the Rolls Royce workers) struggling to produce the best world you can while being enmired in this, very imperfect, world?

Of course, it's bad that arms are being produced that kill and threaten people around the world - but it is not the fault of the people working in the arms factories who, as Jerry Hicks said, would rather be making tractors, if they had a free choice of where they worked. The blame lies with the arms companies and the capitalist system, which fuel the need for arms and then force working class people to make the arms for them.

By struggling for control over their workplace, the Rolls Royce workers are, in fact, struggling against the capitalist system and so against the arms trade. They are working for a time when they, rather than their bosses, will be able to decide whether they produce weapons; or whether they turn the weapons on their bosses. That's the sort of struggle we should support.

As you said Voluntary Slave "The blame lies with the arms companies and the capitalist system, which fuel the need for arms" this is totally true and I agree 100% but you go on to say that "[the capitalist system]then force working class people to make the arms for them." what a load of cobblers we dont live in a state where you starve to death if you dont go to work every day. OK so your income might drop quite alot you wont be able to have sky tv or your dvd or go to the pub and spend £40 any night BUT you wont starve to death in the gutter.
What you say is not justifacation in helping to produce arms and directly helping to kill people and wipe out their ways of life.
The unions are part of the problem not part of the solution (in this country) they give millions to New Labour every year.
Lets face the fact that the unions arn't going to change the system in any way, they are quite happy with keeping the workers down letting them finance the labour party who do their part to keep capitalism in place. They are after all just another bunch of hierarchically structured organizations, who dictate top down.
Sure none of us are pristine pure white as snow but I for one dont make arms I dont contribute to any arms making manufacturers quite as directly as that, spending 7-8 hours a day building things that will directly result in others deaths, I would suspect that you dont either.
If the RR workers went out on strike to demand that RR stoped making fighter engines in that plant then I would support them all the way but the way I see things is their more interested in their wages and pensions and it dont matter what they were producing.

Would you support unionising a factory that made landmines or armalite rifles or hand grenades or cruse missiles or devices used to torture detainees?
would you?

zCat - what about the workers?

zCat - you talk about "unions" not being part of the solution to this that and the other. You seem to completely miss out "the workers", who are in "the unions". Here we have a group of people standing up to one of the world's dominant arms manufacturers. And you're not interested?

Many of the people working at RR will have all sorts of views that you or I disagree with. But how on earth do you hope to change things unless people who don't agree with you yet change their minds? And how will that happen unless you support the good things they do?

People learn more from fighting back than they ever will by (not) listening to someone denouncing them from a distant moral high-ground.

Solidarity with the Rolls workers fighting back!

Take a look at

I liked to asked what you think, with the situation of a quite docile work force, would be a better way of stopping the production of arms. I agree that the trade unions are and will be a barrier to the struggle of workers but in this situation it is better to have a work force within the productive process (the point of capital-labour conflict) that are show the ability to fight for their needs. This dynamic can create the raising conciousness of the workers that might lead them to questioning the whole structure of production and their relationship to it. From a solidarity/economic struggle to a political struggle. Only when this is in effect can a serious attempt be made to challenge the production of arms. This is a possible trajectory of this struggle, which makes it all the more important that people involved in DISARM DSEi put this on their agenda as well. It may seem contrictory but at the end of the day the constant campaigning against the production of arms and weaponary has NOT made a single arms company stop making arms. If you wanna make companies stop making arms then it will (sadly!) only be the through the struggles of the workers within those places to develop a level of power where they force or take over the productive process to make (or not make) something else.\

Please listen to someone who nows the truth on the ground

As a fellow RR worker and union member, i am disturbed that Hicks is getting support he doesn't deserve. The man does not serve his members, only his ego. He has walked rough shot over every other union representative in the factory. To perpetuate his self portrait he has tricked ~80 good men out on a unncecessary strike, with the help of ~10 of his 'enforcers'. He has created a environment of mistrust in the Test area that does not exist anywhere elso on the site, and has held back investment and the self development of the people he claims to represent. The rest of the Bristol site doesn't support the action being taken, the general feeling is that the company and workers will go on and progress much better when this self opinionated egotistical idiot is gone. That is why you only see the same old faces at all the so called rallys, check out the pictures at Derby, they're all the Bristol Test site faces. The same faces that have for years been performing wildcard walkouts without letting other union members across the site have their say. That's not the way of a democratic union - its the sign of self seeking bullies who do what they want to at the expense of others because they are not genuine and don't care. I am ashamed that he has worked for Rolls-Royce at Bristol. I support my union and fellow workers, but this is not a genuine case. thank you.

RRworker - are you in HR?

"RRworker" claims that people don't really support Jerry. Odd that the test members voted to strike in a secret ballot.

"RRworker" claims that Jerry doesn't really represent his members. Odd that the rest of the site has had redundancies for years, but test have defended jobs successfully.

It's quite clear which side you're on. Did you copy your comments from the management Q&A, or are you the one that wrote it in the first place?

Even a tribunal, working to tory laws stacked against working people, found in favour of Jerry. Just how biased must you be to blame the victim?