Picket of Spanish Consulate in Edinburgh - Solidarity with Barcelona squat

Placard-waving protestors plastered the Consulate with flyers, delivered a letter to the Consulate-General and distributed leaflets denouncing the attempted eviction of the self-managed community centre.

"For 14 years LA KASA DE LA MUNTANYA has been a community, cultural and social centre run on principles of self-organisation and self-regulation. Despite the fact that there is clear evidence that the Spanish government has obtained ownership of the building illegally and has no plans for its use, an eviction has been scheduled for 2nd October," declared flyers distributed by the dozen demonstrators. See pictures.

From Sept 26 to Oct 12, the Squatters Assembly of Barcelona has called for a "Fortnight of Struggle" to defend Barcelona's occupied spaces [read background info] This call is in response to the eviction threats against two of the oldest and most emblematic squatted social centres of the city, [the Kasa de la Muntanya and Les Naus], and also to protest about the re-opening of judicial procedures against several other local occupied houses and social centres, such as La Hamsa. This international call to action includes the first international squatters' demonstration in history, due to take place in downton Barcelona on Saturday 4th of Ocotber.

Meanwhile a series of actions, demonstrations, gatherings and meetings are already taking place in and around Barcelona [Photos].

See below for latest news and updates:

- Sat 4th October: The international demonstration against evictions and property speculation took place in downtown Barcelona under heavy police presence. Between 3 and 5,000 people (with a bycicle critical mass in front) marched behind a banner that read "in defense of liberated spaces and against evictions". Another big banner stated: "evictons, torture ... if this is your peace we declare war on you". The demo was very loud and determined, whilst a sound system provided a festive atmosphere. Several activists engaged in a series of actions and performances along the march.
[Reports in English 1 and 2 | Photos 1 and 2 | Videos 1 and 2 | Timeline of Events (esp & cat)]
Further information: IMC-Barcelona(eng) and La Haine(esp).
- Thurs 2nd October: Activities continue to take place in Barcelona's social centres. Today, a call has been made to participate in the workshops "Speeches and Channels - Creating New Networks of Horizontal Communication" due to take place this weekend in the squated social centre Les Naus. Organised by IMC-Barcelona, Les Naus and Luther Blisset.
- Wed 1st October: Around 1000 people have taken to the streets of Barcelona's barrio of Gracia to protest against the eviction of la Kasa de la Muntanya. Reports 1(esp) | 2(cat)
Photos of solidarity action in Barcelona's Tibidabo this morning.
- Tue 30 September: Eviction of Kasa de la Muntanya temporarily suspended. Repots 1 and 2.

Whilst all this goes on in Barcelona, activists in Holland are mobilising to defend from eviction the oldest squat of the country. The "Blauwe Aanslag" in The Hague is a former tax office that has been open for the past 23 years, grewing into a vibrant D.I.Y. living-working environment containing a concerthall, cinema, food-kitchen, professional offset printingplant as well as livingspace for more than 70 people. But on Friday 3rd October, and after a long judicial procedure, a judge decided that the squat can be demolished… The eviction has started [Report | Pics | Squat's history]
At the same time, in Brussels squatters activists and neighbourhood groups are preparing a "squat action week" in the city called "Une Semaine à Bruxelles" due to start on the 15 of October. 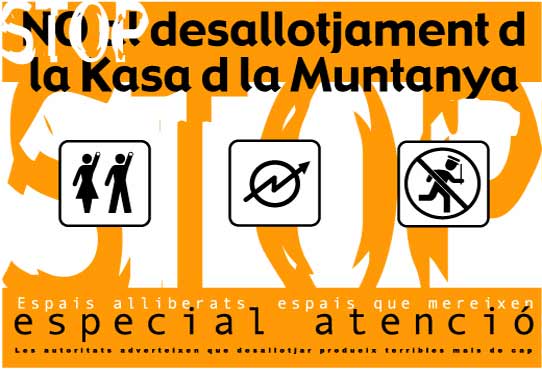 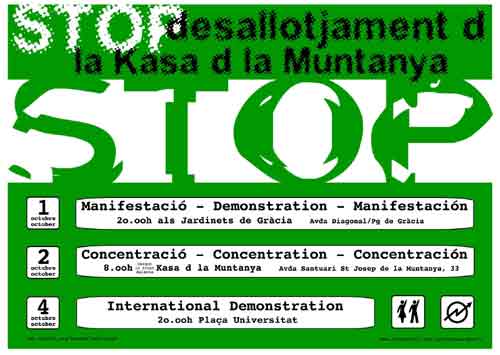 La Kasa de la Muntanya’, at the foot of the famous Gaudi Park Guell in the Gracia district of Barcelona, was occupied on November the 11th 1989 by a group of young people, who envisaged another way of living together to fight for political and social change.

Various groups from Barcelona, Catalonia, Spain and Europe have grown to love the house as they worked together on anti-war, anti-military and anti-fascist projects, amongst others.
Many people from around the world feel connected to the house and its residents.
The people who live there provide an example that there is another way of living and that Solidarity, Sharing and Self-regulation are not empty words.

The house has gone through difficult times.
In 2001, there was an increase of authoritarian and fascist actions by the Spanish State, which led to the prosecution, imprisonment and systematic repression of social movements.
In the summer of 2001, during a period of repression throughout Spain and especially in Barcelona, the occupants suffered a police attack in July and heavy media and police harassment later on in September, due to the detention of alleged members of the Barcelona ETA group. During this period, the occupants received the support and sympathy of many organisations, groups and individuals. Eventually, it became clear that these moves were corrupt attempts by the PP (Conservative Party) Government to criminalise La Kasa and the occupation of empty properties for political purposes.

Now, two years later and without any plan for the building, the government is again attempting to evict the house and end 14 years of history and struggle. There are clear arguments that the Treasury Department, which claims to own the house, obtained it illegally after it ceased to be used by the Guardia Civil (Spanish Pollice) many years ago.

The residents plan to fight to the end to defend the house and what it stands for.

The occupants have called for help to stop this eviction. There is a need for solidarity, help and support from all social movements, groups, organisations and those who will take to the streets to condemn injustice and repression.