Switzerland has voted its populist exponent Christoph Blocher to be a member of the executive Swiss federal Council. Mr. Blocher, known as right wing hawk and wealthy industrialist has herewith brought his political career to the top of Swiss politics. With Christoph Blocher, Switzerland has a brilliant and inconvenient politician who, like few before him, will bring an icy breath to the traditionally liberal concept of Switzerland. 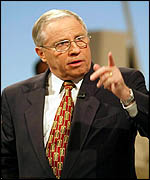 Unforgotten are those days of Mr. Blocher’s speeches at the yearly meetings called “Albisguetli Tagung”, organised by his party SVP (Swiss People’s Party). The left feared his sharp tongue, as he called them “the nice left ones” and made them appear responsible for crime, drug abuse and lax immigration laws in Switzerland. He stood on the speaker’s desk, like a wrestler ready to jump, his arms wildly gesticulating and his tirades a guaranteed slap in the face for his enemies. Also guaranteed was the standing ovation and an enthusiastic audience who were left thinking only one thing: “We need a strong man to clean up Switzerland’s mess.”

No doubt, Christoph Blocher is one of the countries most brilliant communicators, an excellent strategist and rhetorician. The political Gladiator did not even fear to attack the “classe politique”, the old established parties. By calling them puppets of the European dictate and a bunch of lazy money-makers, acting like thieves on behalf of the hard working Swiss people’s wallet. His audience and voters see him as one of their own, standing up for the people’s rights. In fact that is not correct. If you look at those peoples furrowed faces and callous hands one understands that he does not belong to them. Owning a doctor title of law with magna gum laude, a military rank of a colonel (ret.), and as owner of a major chemical factory “EMS Chemie”, with subsidiaries in England and America, he has not much to fear. Except the tax office, and therefore he moved to the tax friendly village Herrliberg. His private wealth culminates up to 2 Billion Swiss Francs.

With his and his colleague’s enormous financial power, he was able to realize a long term offensive propaganda strategy never seen before. The calculation was right. With the party’s colossal financial background he was able to send pamphlets into each single household; Pamphlets against the immigrants, the weak government, against the left, the criminals and the destruction of Swiss fundaments and the selling out to foreigners. This and his well used practise of “I say what you think” brought him masses of politically frustrated followers, who saw a kind of messiah in Blocher. The well calculated result of that is simple. Through the massive movement of farmers, workers and the “decent” Swiss, Blocher became a political power. To end the exodus from the liberal parties to Blocher’s SVP, the liberals had to push their political agenda to the right as well and with that, Blocher’s Politic came to mainstream.

SVP has for many years been ignored and sarcastically been called the party for “angry old men”. These “angry old men” became known as being completely boring and of being negative minded concerning most of Switzerland’s decisions and voting programs, especially with the successful resistance to the EC. By attacking the established parties, they were at the same time not able to present useful concepts to work out Switzerland’s requests. But one thing has been completely overseen by the “nice left ones” as well as by the “classe politique”: The fact that Christoph Blocher’s Fraction was the only driving force in Switzerland’s slow ’n’ low moving Circus of politics. The “angry old men’s” Party made them all, from the left to the right, change their agendas and run a few steps behind, or duck in their graves.

Mr. Blocher didn’t cook his “Swiss Fondue” only with white wine. His even more radical club AUNS, (Campaign for an independent and Neutral Switzerland) includes almost the radical top of the mountain. Founded as Phalanx in 1986 against the membership to the UNO, the NATO and the EC, it became the fundament of the strong Swiss will for their independence and was cleverly used as a crack of the whip, by using slogans and pictures copied by the Swiss pro-Nazis of the Second World War, just like the SVP did. At some speeches in Zurich and elsewhere, Blocher was surrounded by Neo-Nazi Skinheads and did not do much about getting rid of this brown aura. Observing the scene, it even helped him, as he also became something like a pop icon of the “angry youth” with crude ideas.

Now the Gladiator Blocher has become Caesar and in that position his Party probably cut through its own vein of life. If Blocher can’t solve his followers demands and if he stands against their will, the “Swiss Peoples Party” will loose its mentor and with him the force behind the party. Another option could be that a new, even more radical party will take over the “old angry man” as well as the “angry young ones” and push the political landscape even further to the edge of no honour.