In an unprecedented move, the organisers of France’s largest
documentary film festival, Le Festival du Cinיma du Rיel (4 to 14
March 2004), held annually at the Centre Pompidou in Paris, have
cancelled one of the screenings of the film Route 181 –
Fragments of a Journey to Palestine-Israel, which is co-directed
by the Palestinian Michel Khleifi and the Israeli Eyal Sivan. 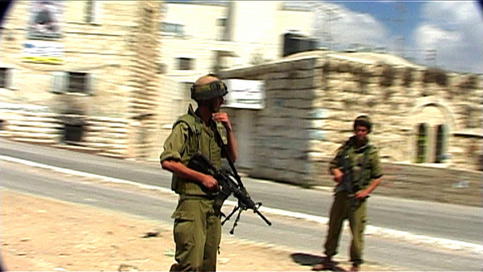 Route 181 is the result of Khleifi and Sivan's two month journey from the south to the north of their country of birth -- they traced their trajectory on a map and called it Route 181. This virtual line follows the borders outlined in Resolution 181, which was adopted by the United Nations on November 29th 1947 to partition Palestine into two states. As they travel along this route, they meet women and men, Israeli and Palestinian, young and old, civilians and soldiers, filming them in their everyday lives.

Khleifi, a Palestinian, and Sivan, a Jewish Israeli, are not the first filmmakers from the region who have found their work on the Israeli-Palestinian conflict to be met with censorship. Elia Sulieman's film Divine Intervention was originally deemed not eligible by the Academy of Motion Picture Arts to enter into the competition for Best Foreign Film because the film is not from a country recognized by the UN (the Academy has no published rules stipulating this qualification). Mohammed Barki's documentary Jenin, Jenin, which shows in harrowing detail the aftermath of Israel's early 2002 invasion, is forbidden to be screened in Israel.

In a statement signed by the Ministry of Culture, the Pompidou
Centre and the Bibliothטque publique d’information (Bpi), the
organisers justify their decision to censor Route 181 in the following manner:

“The film’s broadcast on ARTE last November had already
provoked intense emotion, particularly among those who are
alarmed by the rise of anti-Semitic and anti-Jewish statements
and acts in France, and who consider that the film’s underlying
hostility to the existence of Israel may be of a nature to
encourage these acts.

"Since announcing the presence of the film in this year’s festival
programme, many letters from diverse sources have been
received by the management of the Centre Pompidou and the
Bpi, expressing their unhappiness that the film was going to be
shown once more in a publicly-owned space.

"In view of this unease, and in view also of the risks to public
order, the Ministry of Culture and Communication, the Centre
Pompidou and the Bpi have together decided to reduce the
number of screenings of the film to one, instead of the two
originally planned, and to warn the audience before the screening
of the dangers of any unilateral point-of-view. In consideration of
the state of French society today, this intervention is of the
utmost importance to our understanding of the rights of
citizenship (un enjeu citoyen tout א fait essentiel).
Nonetheless, we wish to express our attachment to the
organisers’ freedom of choice in putting together cultural events
but also to [the need] to act as an institution conscious of its
responsibilities.”

Immediate response by the filmmakers

The film’s two directors immediately responded to these
suggestions with the following words:

“We are utterly stupefiedto hear of the proposed cancellation of the screening of our film on March 14, which we find scandalous.

"Your statement suggests that our film is of a nature to encourage
'the rise of anti-Semitic and anti-Jewish statements and acts in
France.' This defamatory accusation is the result of a campaign
of pressure and intimidation on the Centre Pompidou and on the
Bpi.

"We are as concerned about anti-Jewish and racist acts in France
as our anonymous detractors. But in the face of these
phenomena, no one has a monopoly or right of exclusivity over
concern or the love of justice and peace, as our films have
shown over the past two decades.

"This shameful decision, based on such vague notions as the
'intense emotion' or the 'unease' of some, as well as 'the risks
to public order,' is extremely serious. It indicates that the State’s
cultural apparatus is incapable of assuring the screening of a film
or the running of a film festival. Quite apart from the fact that
your act will only reinforce the odious fantasies of some, it also
takes us a step nearer to the re-establishment of censorship and
is a clear encouragement to extremists. To yield to pressure and
to sectarian demands as you have done will hardly pacify
emotions nor lead to a real debate of the issues posed by the
film.

"This is why we urge you to retract your decision and to authorise
the festival’s organisers to re-programme the screening on March
14th.

Immediately after sending this repsonse, the filmmakers
contacted a number of professional organisations and have
received widespread support from a large number of prominent
figures, including Jean-Luc Godard and philosopher Etienne
Balibar. The list may be viewed here.

If you would like to add your signature to the protest, please
write to:

A DVD copy is currently available for purchase here.