Vanunu was a subordinate technician at the Dimona nuclear plant when he blew the whistle on Israel's clandestine nuclear weapons programme. Following his conscience, and believing the programme threatened another holocaust, he delivered photographic evidence of historic magnitude to the Sunday Times [the original article].

He was then lured to Italy from where Israel's secret police abducted him to Israel, in grave violation of internnational law. He was sentenced as a spy to 18 years in prison. The first 11 1/2 years, he spent in solitary confinement. 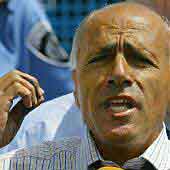 Although he was released in April after serving the full eighteen years [Report of celebrations, Gush Shalom], he is still subject to severe restrictions on movement and on who he can talk to, in particular foreigners. Nevertheless, Vanunu defied these restrictions to give an interview to Amy Goodman of Democracy Now [part 1, part 2] and, rejecting his Israeli citizenship on state television, he has courageously stated that he wants to become a Palestinian citizen [Palestine-info]. A convert to Christianity, he is currently living in sanctuary in St George's Anglican Cathedral, Jerusalem [UK Indymedia] where he is supported by Israeli friends, activists and internationals.

The campaign to free Vanunu continues to be active, working for his complete freedom. Despite an international petition aimed at the Israeli Government, the Israeli High Court recently upheld the restrictions on Vanunu's movement.

Vanunu has endured the most punishment of any whistle blower. But there are others who have courageously come forward in recent months: Sibel Edmonds [Indymedia] , the Bloody Sunday witnesses [Guardian] and Katherine Gun [Liberty]. More from Article 19 and Liberty.

During his time in isolation, Vanunu wrote the following:

I am the clerk, the technician, the mechanic, the driver.
They said, Do this, do that, don't look left or right,
don't read the text.  Don't look at the whole machine.  You
are only responsible for this one bolt.  For this one rubber-stamp.
This is your only concern.  Don't bother with what is above you.
Don't try to think for us.  Go on, drive.  Keep going.  On, on.

So they thought, the big ones, the smart ones, the futurologists.
There is nothing to fear.  Not to worry.
Everything's ticking just fine.
Our little clerk is a diligent worker.  He's a simple mechanic.
He's a little man.
Little men's ears don't hear, their eyes don't see.
We have heads, they don't.

Answer them, said he to himself, said the little man,
the man with a head of his own.  Who is in charge?  Who knows
where this train is going?
Where is their head?  I too have a head.
Why do I see the whole engine,
Why do I see the precipice--
is there a driver on this train?

The clerk driver technician mechanic looked up.
He stepped back and saw -- what a monster.
Can't believe it.  Rubbed his eyes and -- yes,
it's there all right.  I'm all right.  I do see
the monster.  I'm part of the system.
I signed this form.  Only now I am reading the rest of it.

Rise and cry out.  Rise and tell the people.  You can.
I, the bolt, the technician, mechanic? -- Yes, you.
You are the secret agent of the people.  You are the eyes of the nation.
Agent-spy, tell us what you've seen.  Tell us what the insiders, the clever ones, have hidden from us.
Without you, there is only the precipice.  Only catastrophe.

I have no choice.  I'm a little man, a citizen, one of the people,
but I'll do what I have to.  I've heard the voice of my conscience
and there's nowhere to hide.
The world is small, small for Big Brother.
I'm on your mission.  I'm doing my duty.  Take it from me.

Come and see for yourselves.  Lighten my burden.  Stop the train.
Get off the train.  The next stop -- nuclear disaster.  The next book,
the next machine.  No.  There is no such thing.