Israel Shamir exposed! A fake or a plant?

Israel Shamir, the "Israeli-Jewish" enemy of Zionism (and now of Judaism too) has a secret identity which he won't deny or speak about. He just smears his critics. Here is photgraphic evidence that Shamir, the darling of White Supremacists, the BNP and other racists is a Swedish bloke called Joram Jermas. 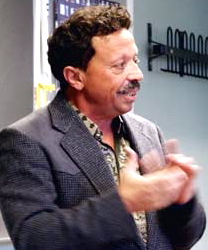 The man known as Israel Shamir 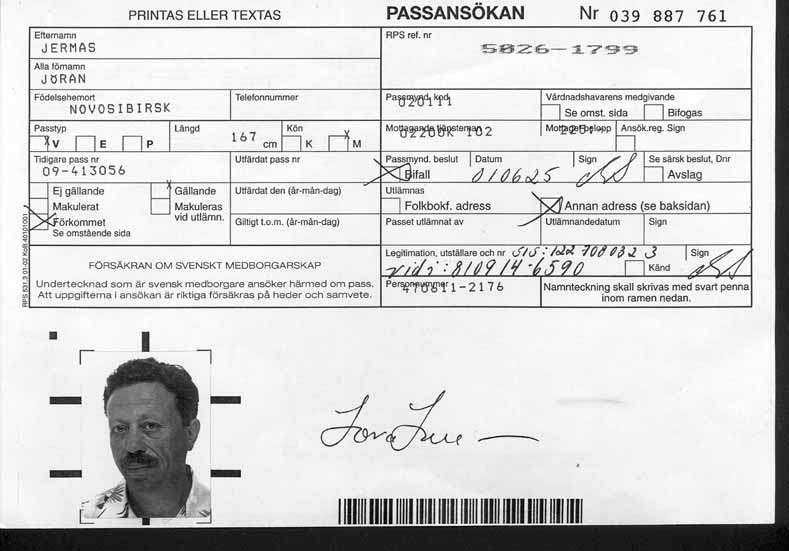 For twenty years the Jewish Israeli journalist Israel Shamir has been living a double life as a Swede called Jöran Jermas. Official files show Shamir’s own picture and Siberian place and date of birth (11 June 1947) on the Swedish man’s passport. It’s not another of Israel (Adam) Shamir’s many pen names; it’s a completely different identity. None of this appears in the résumée promoted on his website as The Shamir Legend: so where does legend end and mythology begin?

It was a simple enough question – “Who are you?” But for once the voluble Shamir fell silent when he saw our evidence. From Arizona his publisher Carol Adler at Dandelion Books said “I have not yet heard back from him; I emailed him; I know he is aware you copied me on your correspondence to him.”

A brand new ‘super-dissident’ essayist was launched into cyberspace four years ago: it was a linguistic adventure too, it being his first work in English. The obscure middle-aged Russian translator became an instant celebrity, feted as a straight-talking Jewish Israeli whistle-blower. He was rewarded with international speaking tours, books about the Palestine conflict and positions on committees.

Shamir now says he quit Judaism some time ago and joined the orthodox Christian Church of the Holy Land. He writes that he grew disgusted not just with Zionism but with what he now considers the racist and predatory nature of the Jewish faith itself. Jews tricked the Romans into crucifying Jesus Christ, he reasons, and so Jews today can be called “Christ-killers” – which he does in his writings.

Today a number of Palestine campaigns in Europe and the US commend Shamir’s website and circulate his material. That’s how I came across his recent essay, ‘Tsunami in Gaza’. Nor was I alone. Internet fans of the American white-supremacist, David Duke, were urged to read the “very brave Israeli writer, the intrepid Israel Shamir” and to note “the depth of anti-gentile feeling in the Jewish faith” to which his essay testifies. In the UK, the British National Party endorses Shamir’s views online.

‘Tsunami in Gaza’ expands on an Israeli press report of orthodox Jews rushing to Thailand hoping to give Jewish corpses a religious burial. However, Shamir’s essay makes a shocking new claim (which he doesn’t substantiate); that the Thai government agreed to delay mass burials just to please the Jews, and so exposed countless Thai survivors and rescuers to greater risk of deadly epidemics. How did a small army of journalists miss that one? Nonetheless, this is all ‘evidence’ of Judaism’s wilful inhumanity and “nasty exclusiveness”.

“In face of the huge tragedy in South East Asia, this insistence of `not being counted among the goyim’ is especially offensive, bordering on denial of our common humanity. What is so bad about Thais, French, Chinese and other people who found their death in the catastrophe that you can't leave your dead lying next to them?

“Personally,” a British supporter of the Palestinians wrote to me, “I didn't find Shamir’s article anti-Jewish but certainly I did find it anti-Israel or anti-Zionist. I presumed he was Jewish himself so unless we follow the tortured example of the Zionists’ thinking and consider him a 'self-hating Jew’, then how can he be anti-semitic? (sic)”

Israel Shamir is equally comfortable with overtly anti-Jewish and White supremacist groups among his fan-base: "It is not White Racist Supremacism oppressing Palestinians,” he writes. “If I were a Palestinian, the White Nationalists would be my legitimate allies." In his view they have “a common enemy”, the Jews. If you’re intrigued to learn, for example, “Why Zionism is Racism but anti-semitism is not” then Shamir’s website is the place for you. Judaism is behind it all – and they’re all in it together. It’s the Jews’ fault Americans are dying in Iraq: their fault a hundred thousand Iraqis have been slaughtered. This is all hidden from us because Jews also run the media.

On the Shamir website is one apparently critical item – “The Shamir Legend” by Ratibor Petrushkin – Shamir’s former colleague at the far-right Russian weekly Zavtra. It starts well enough, mentioning 27 reasons why Shamir cannot really exist. Disappointingly it fails to outline a single one of them. Instead it copies a 560-word tribute from another Shamir website, the “First unofficial Russian site of Israel Shamir”, and then simply clears him of all 27 charges (whatever they were).

According to the authorised legend, Shamir was born in Novosibirsk in Soviet Siberia, the great-grandson of a rabbi. He was a brilliant student and a radical Russian writer. He migrated to Israel in 1969 and fought in the 1973 war. He spurned a career in law to become a journalist, spending time in the Far East and London. By 1980 he was back in Israel writing for papers and producing a book. He returned to the Soviet Union in 1989 and reported on its collapse until 1993 when he set up his present home in Jaffa.

Such is the legend. However, Israel Shamir first appeared on the Swedish census in 1984 (when the legend has him in Israel). In 1989 he wrote from his Stockholm address trying to sell the original Himmler’s war service diary to the Holocaust revisionist, David Irving. Shamir said he was acting for unnamed Russian businessmen. It fell through, but the correspondence is still on Irving’s website.

Publicly available Swedish government files show Shamir later became a citizen and is still registered as living in Stockholm, with his second wife – not in Jaffa. His first wife and their two sons also live in Stockholm. In 2001 Israel Shamir changed his name to Jöran Jermas. He was already a Swedish citizen, now he had the name to go with it. Finally, the National Passport Registry has provided a copy of Jöran Jermas’ passport file. It contains Israel Shamir’s photograph and his place and date of birth. We copied the file to Mr Shamir and his American publisher. We invited him to comment on this evidence, to explain it or denounce it – but he has said nothing.

By contrast his fellow Swede, the Palestine-born activist Ammar Makboul, was happy to speak about Israel Shamir: “Refuting one type of scapegoating with another is to substitute the demand for freedom, human rights and a just peace, with racist conspiracy theories. And that’s the reason that we cannot accept Shamir as part of the Palestinian solidarity movement.” The Palestine Solidarity Association in Sweden has shunned Shamir’s latest collection of essays and sales are low. In October Shamir’s “L’autre Visage d’Israel” (Israel’s Other Face) was de-published by Balland/Blanche in France. They removed it from bookstores and stripped it from public libraries less than a fortnight after going on sale.

One puzzle has been solved, but questions remain: "Who is "Israel Shamir"? Is he "Jöran Jermas"? Or are they both fictional? What about his other aliases, “Vassili Krasevsky” and “Robert David” (inter alia?)? More important still, whoever he is, what's his game?"

Manfred Ropschitz is a journalist and broadcaster based in the UK. He's an anti-Zionist Jew, the son of a Polish Holocaust survivor and an active supporter of Palestinian rights since the late 1970’s.