The fact that prime 9/11 suspect is still up to tricks - killing Osama Bin Laden in fact - and all on the David Frost show. Showing links between ISI and the CIA. 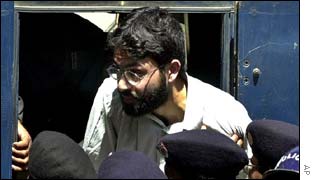 
the fall guy - Omar Sheikh
Nationality: British
At the heart of so much that's wrong with Western interventions.
Accused by Musharraf of working for MI6
Originally supposed to be Muslim 'extremists' but shown to have been working for ISI AND MI6, recruiting at the London School of Economics

On October 6, 2001, a senior-level U.S. government official told CNN that U.S. investigators had discovered Ahmed Omar Saeed Sheikh (Sheik Syed), using the alias "Mustafa Muhammad Ahmad" had sent about $100,000 from the United Arab Emirates to Mohammed Atta. "Investigators said Atta then distributed the funds to conspirators in Florida in the weeks before the deadliest acts of terrorism on U.S. soil that destroyed the World Trade Center, heavily damaged the Pentagon and left thousands dead. In addition, sources have said Atta sent thousands of dollars -- believed to be excess funds from the operation -- back to Saeed in the United Arab Emirates in the days before September 11. CNN later confirmed this.

The 9/11 Commission's Final Report states that the source of the funds "remains unknown."

More than a month after the money transfer was discovered, the head of ISI, General Mahmoud Ahmad resigned from his position. It was reported that the FBI was investigating the possibility that Gen. Ahmed ordered Saeed Sheikh to send the $100,000 to Atta; there were also claims that Indian intelligence had already produced proof for the Pakistani administration that this was so.

The Wall Street Journal was one of the only Western news organizations to follow up on the story, citing the Times of India: "US authorities sought General Mahmoud Ahmad's removal after confirming the fact that $100,000 was wired to WTC hijacker Mohammed Atta from Pakistan by Ahmad Umar Sheikh at the instance of General Mahmoud." Another Indian newspaper, the Daily Excelsior, quoting FBI sources, reported that the "FBI’s examination of the hard disk of the cellphone company Omar Sheikh had subscribed to led to the discovery of the "link" between him and the deposed chief of the Pakistani ISI, Mahmoud Ahmad. And as the FBI investigators delved deep, sensational reports surfaced with regard to the transfer of 100,000 dollars to Mohammed Atta, one of the kamikaze pilots who flew his Boeing into the World Trade Centre. General Mahmoud Ahmad, the FBI investigators found, fully knew about the transfer of money to Atta."

The Pittsburgh Tribune notes that "There are many in Musharraf's government who believe that Saeed Sheikh's power comes not from the ISI, but from his connections with our own CIA."

Sheikh rose to prominence with the 2002 killing of Wall Street Journal reporter Daniel Pearl, who at the time was in Pakistan investigating connections between the ISI and Islamic militant groups. In Pakistan, Sheikh was sentenced to death for killing Pearl, however his complicity in the execution and the reasons behind it are in dispute.

In an opinion piece published by the Wall Street Journal, Tunku Varadarajan has claimed that “It is a fact that General Mahmoud Ahmad, then head of the ISI, wired $100,000 to Mohammed Atta before 9/11 through an intermediary."

...Bhutto asserted to David Frost less than two months ago that bin Laden had been murdered by Omar Sheikh, whom the Sunday Times once described as "no ordinary terrorist but a man who has connections that reach high into Pakistan's military and intelligence elite and into the innermost circles" of bin Laden and al-Qaeda...
_________________