Gordon Brown urged to act for British residents in Guantánamo 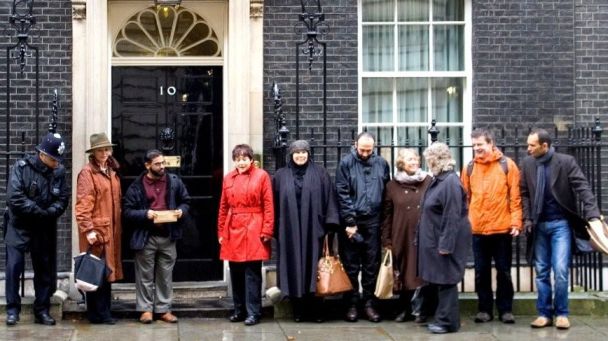 On Friday morning, on the sixth anniversary of the opening of the US administration’s lawless prison at Guantánamo Bay, Cuba, a group of human rights campaigners presented a letter to Prime Minister Gordon Brown at 10 Downing Street, requesting him to act on behalf of Binyam Mohamed and Ahmed Belbacha, the two remaining British residents in Guantánamo, and also to ask the US government to close the prison down.

Although the weather was awful, spirits were high amongst those who had gathered to deliver the letter: released Guantánamo detainees Moazzam Begg and Bisher al-Rawi, MEPs Baroness Sarah Ludford and Jean Lambert, actress Kika Markham (Corin Redgrave’s wife), Tahir Deghayes, the younger brother of released detainee Omar Deghayes, Andy Worthington, author of The Guantánamo Files: The Stories of the 774 Detainees in America’s Illegal Prison, and an unexpected guest: Joanna Lumley, whose presence obviously brightened the morning for the group of press photographers who had gathered in the rain to record the occasion.

http://www.cageprisoners.com/) and its signatories is reproduced below. For further information on the British residents, see Andy’s archive (

It is, however, with great concern that we note the UK government failed in securing the return of two remaining long-term prisoners who hold strong ties to this country, Binyam Mohamed al-Habashi and Ahmed Belbacha. This is particularly disquieting since we are aware that the Foreign Secretary had included Binyam Mohamed in the initial request made this August to his US counterpart.

We believe Binyam Mohamed sought asylum in the UK in 1994 and that he was granted leave to remain here. The circumstances surrounding the seizure, extraordinary rendition and imprisonment of Mr. Mohamed, as described by him in Guantánamo Bay through his legal representatives, are horrific to say the least. Part of his testimony describes how he was interrogated in Morocco for 18 months, evidently at the behest of US intelligence. During this time it states, amongst other things, that he was stripped naked and a scalpel used to repeatedly cut his chest and genitals.

In July 2003 two British citizens, Moazzam Begg and Feroz Abbassi, were amongst the first men to be designated for trial by military commission in Guantánamo. Many senior British law lords said the proposed procedure was highly objectionable. Lord Steyn described it as “a mockery of justice … derived from the jumps of the kangaroo.” The then Attorney General, Lord Goldsmith, himself finally intervened stating that the military commissions process was wholly inadequate for the purposes of administering a fair trial and, demanding in the absence of a just system, that the men be repatriated. In January 2005 the last of the UK citizens, including Begg and Abbassi, were returned home.

It is a strange paradox that Binyam Mohamed remains in Guantánamo only because he is now being put through the very process whose objectionable nature had once provoked the decision to pursue freedom for British men held unjustly.

In the case of Ahmed Belbacha, we have learned that he lived and worked in Bournemouth since 1999 and was cleared to work at a Labour party conference there. He even received a letter of thanks from the then Deputy Prime Minster, John Prescott, for his services. Mr. Belbacha was cleared by the US military for release but he cannot safely return to Algeria where he would be at serious risk from both militants and a government known for human rights abuses. Without intervention by the United Kingdom, Mr. Belbacha may face a fate worse than Guantánamo Bay.

We therefore kindly request once again that the British government intervenes on behalf of these men who have been subjected to the violations of incarceration without trial for so long.

Today, the Guantánamo Bay prison centre has reached the six-year mark since inception. Hundreds of men continue to be held there without access to due process and the rule of law. The chorus of voices calling for the closure of this place grows stronger by the day. In June last year, former US Secretary of State, Colin Powell, stated, “we have shaken the belief the world had in the American justice system … by keeping a place like Guantánamo open and creating things like the military commission. We don't need it and it is causing us far more damage than any good we get for it.”

He also said, “if it were up to me I would close Guantánamo not tomorrow but this afternoon” and “I would get rid of Guantánamo and the military commission system.”

or.wolff@virgin.net
For a detailed appraisal of the situation at Guantanamo on its sixth anniversary, and the problems surrounding its closure, see my article, “Six Years Of Guantanamo: Enough Is Enough” (