Legal charity Reprieve releases the first of four pictures by political cartoonist Lewis Peake, based on detailed descriptions of drawings by Sami al-Haj, the al-Jazeera cameraman imprisoned in Guantánamo, which were censored by the Pentagon. 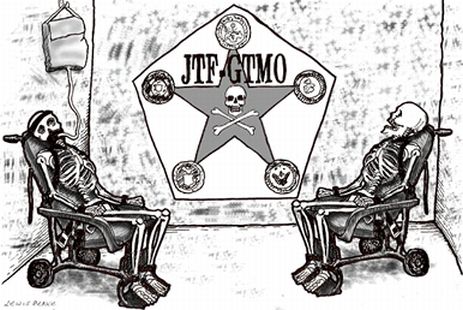 http://www.reprieve.org.uk/), the charity that provides frontline investigation and legal representation for prisoners in Guantánamo Bay, released the first of four pictures based on censored drawings made by imprisoned al-Jazeera cameraman Sami al-Haj (

The pictures were created by political cartoonist Lewis Peake (

http://www.illustration-art.co.uk/), and came about after Mr. al-Haj’s original drawings were censored by the Pentagon. Mr. al-Haj had shown the drawings to his lawyer, Cori Crider, during a visit last month. Fearing that they would be censored, Ms. Crider asked Mr. al-Haj to provide detailed descriptions of the drawings, which he duly did.

When the drawings were subsequently censored, as anticipated, Reprieve approached Lewis Peake and asked him to create original works based on Mr. al-Haj’s descriptions. Mr. Peake was originally hesitant, as the following explanation reveals, but ultimately found the process deeply rewarding. “Drawing cartoons based on someone else’s concepts is a new experience for me and when Reprieve asked me to do this I wasn’t sure it would work,” he said. “I had to remain true to the spirit of Sami’s original drawings (which I had not seen!) yet somehow inject something of my own to avoid creating lifeless replicas. In the event I have found it very rewarding -- artistically and emotionally -- and if it contributes even minutely to helping Sami obtain his freedom (insh’ allah!), it will have done more than all of my other work combined.”

The first of the pictures to be released (the others will follow over the next week or so) documents Mr. al-Haj’s feelings about the way he sees himself subjected to force-feeding in what he and other prisoners describe as the “Torture Chair,” the restraint chair into which they are strapped twice a day, when they have a 110 cm tube forcibly inserted into one nostril so that liquid food can be administered. The tube is pulled out after each feeding, and the prisoners are left in the chair for up to two hours so that they can be force-fed again if they vomit.

“The first sketch is just a skeleton in the torture chair,” Mr. al-Haj explained. “My picture reflects my nightmares of what I must look like, with my head double-strapped down, a tube in my nose, a black mask over my mouth, with no eyes and only giant cheekbones, my teeth jutting out -- my bones showing in every detail, every rib, every joint. The tube goes up to a bag at the top of the drawing. On the right there is another skeleton sitting shackled to another chair. They are sitting like we do in interrogations, with hands shackled, feet shackled to the floor, just waiting. In between I draw the flag of Guantanamo -- JTF-GTMO -- but instead of the normal insignia, there is a skull and crossbones, the real symbol of what is happening here.”

Explaining the rationale behind the project, Reprieve’s Director, Clive Stafford Smith, explained, “Reprieve has commissioned these drawings to highlight the denial of basic justice to Sami al-Haj. He is no terrorist, but he does not ask you to take his word for it. By his peaceful hunger strike he asks only for a fair trial. Yet the US military seeks to muzzle him at every turn. He cannot tell his story to a jury. He is not allowed to draw a picture demonstrating how he and others suffer. And now, as the price for discussing his release, the US is trying to force the Sudanese government to bar Sami from working as a journalist once he is out of Guantánamo. This reflects precisely the opposite of the high ideals for which the US stands.”

Speaking of the censorship of Mr. al-Haj’s original pictures, he added, “This is typical of the misplaced censorship used by the authorities at Guantánamo, where the motivation is not national security but trying to avoid embarrassment for the illegal acts of the military. The Bush Administration can suppress Sami’s sketch, but they can’t stop another artist from replicating it. Ultimately, Sami’s spirit is irrepressible. Like Martin Luther King in his Letter from Birmingham Jail, the world will hear him, because he seeks only justice.”

Andy Worthington is the Communications Officer for Reprieve, and the author of "The Guantánamo Files: The Stories of the 774 Detainees in America’s Illegal Prison" (