"There is a climate of hate and fear in the Netherlands"

Geert Wilder, the leader of the right-wing Freedom Party in the Netherlands, plans to release his 15-minute film, entitled "Fitna," an Arabic word for sedition or strife, before April 1.

"We can no longer remain silent. There is a climate of hate and fear in the Netherlands," said Rene Danen, a spokesman from anti-racism organisation Nederland Bekent Kleur (The Netherlands Shows its Colours), which organised a protest against the film. 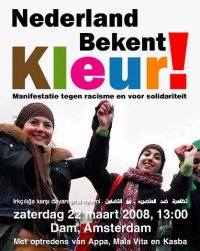 Geert Wilder, the leader of the right-wing Freedom Party, plans to release his 15-minute film, entitled "Fitna," an Arabic word for sedition or strife, before April 1.

He had planned to broadcast the film on the internet after Dutch private and state channels decided to give it the cold shoulder.

The Hague District Court is already examining a lawsuit filed by the Islamic Federation to ban the documentary.

Wilders claims his film would show the Noble Qur'an as "fascist book" that inspires people to commit "awful acts".

According to a Dutch daily which has seen early rushes, the film links images of current bloodletting in Muslim countries to chapters of the Qur'an, ending with an image of a man the film called Prophet Muhammad (peace and blessings be upon him).

The government has distanced itself from Wilder's views and tried unsuccessfully to convince him not to broadcast the film.

"If need be, I will personally distribute DVDs in the Dam (famous square in Amsterdam)."

The anti-Islam movie is already stirring public furor in the European country.

More than 5,000 people took to Dam square on Saturday, March 22, to protest the documentary.

Cladding in winter clothing against the freezing cold and drizzling rain, the protesters held placards reading "Enough is enough", "Stop the witch-hunt against Muslims" and "The Wilders West: Not Wanted".

"This is the first time in 10 years that there is such a big anti-racism demonstration," Rene Danen of the organizing committee told Agence France Presse (AFP).

"Because of the discriminatory remarks that Wilders has made many people felt they needed to be here."

Danen said the movie is a clear evidence of the growing Islamophobia in Netherlands.

"We can no longer remain silent.

"There is a climate of hate and fear in the Netherlands."

Wilders is infamous for his anti-Islam stances and has compared Qur'an to Mein Kampf, which outlines Hitler's racist ideology.

He has also called for banning the Muslim holy book from the Netherlands.

"I think it is embarrassing what Wilders says, for example about tearing up the Qur'an," said Protester Rieke, a 61-year-old Amsterdam arts teacher.

"It is a very bad example to people to let him say whatever he wants."

The Netherlands Shows Its Colors