Plane Stupid Scotland scaled the Scottish Parliament building today, in an early morning protest at Scottish Government plans to impose massive airport expansion by the back door. At 2pm the protestors voluntary walked off the building, were arrested and taken to St.Leonards police station. 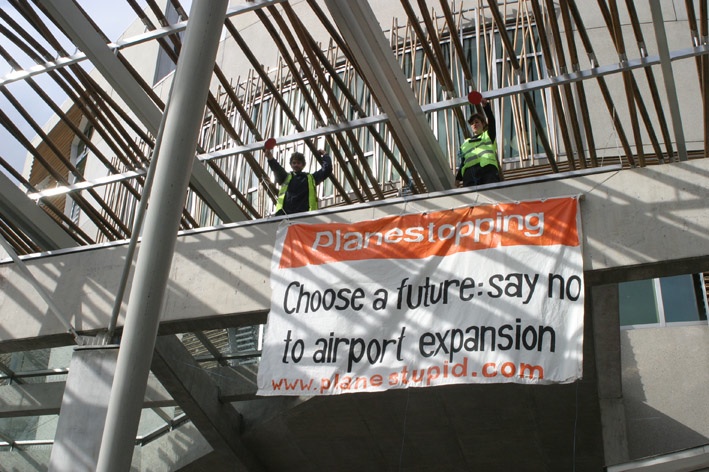 Plane Stupid Scotland scaled the Scottish Parliament building today, in an early morning protest at Scottish Government plans to impose massive airport expansion by the back door. At 2pm the protestors voluntary walked off the building, were arrested and
taken to St.Leonards police station.


The surprise occupation exposes outrageous Government proposals to ban the public and MSPs from consultations that sanction major developments, including airport expansion. The action comes the day before consultation on these National Planning Framework proposals closes (1). Two members of Plane Stupid Scotland occupied the rooftops of the Parliament, unfurling a massive banner saying, "Planestopping! Choose a future: No airport expansion.."

Under National Planning Framework proposals, Ministers will designate a whole generation of dirty development as 'National Developments', which bypass public or parliamentary approval. Subsequent planning enquiries will be limited to design issues (2). The meager consultation exercise on the proposals ends tomorrow (April 15) with legislation expected in the autumn.

"The environmental and democratic credibility of this Framework is zero. We are facing a runaway climate threat, but the Scottish Government's reaction is to triple air traffic (3) and use the NPF to gag affected communities. Without reducing aviation and emissions there will be no future to plan for.."

The proposals list Edinburgh and Glasgow airport expansions as National Developments, reinforcing existing plans to expand all Scottish airports by 2030.(4) As a blank cheque for massive airport expansion with no scrutiny or accountability, the NPF is recipe for disasters like Heathrow in every major Scottish city.

The planned expansion, from 14 million to 50 million passenger movements by 2030, would cause a massive rise in climate change emissions, confirming aviation's position as the fastest growing source of greenhouse-gas emissions in the UK (5). The program makes a mockery of the NPF's sustainability remit, and of Scotland 's target of reducing emissions by 80% by 2050 (6)..

"Aviation is destroying our future and retreating into smoke-filled rooms is no solution. You don't get good planning by gagging the people you're planning for. We need democracy, and we need to face the fact that air traffic must shrink."


Plane Stupid Scotland is fed up with Government inaction and white elephants in the face of an unprecedented climate threat. Today's action by Plane Stupid Scotland is the start of concerted action against the National Planning Framework, as part of the growing movement of ordinary people (7) who have decided we must act ourselves to tackle climate change.

NOTES TO THE EDITOR

Plane Stupid Scotland are calling for:

2) An urgent, targeted and public investment strategy in the alternatives to short-haul aviation

3) No more runways- and a strategy to dismantle existing ones.

4) Mobilisation of affected communities to determine their own lives against aviation expansion and runaway climate change.

5) Research and investment into genuinely sustainable alternative employment opportunities for those employed in the aviation industry.

(1) & (2) Under the 2006 Planning (etc.) Scotland Act, Ministers gained the power to designate 'National Developments'. This designation reserves decisions on where, when and what to build for Ministers alone, with no arrangements for scrutiny or accountability. Once a 'national development' is designated any subsequent inquiry will not be allowed to consider the justi fication or need for the proposal." (Scottish Environment LINK) The proposed National Planning Framework is a spatial plan which sets out a strategy for planning in Scotland , and identifies the first set of National Developments.

To quote the excellent report by Scottish Environment LINK: "At no stage in the process will individuals or organisations be able to lodge formal representations or objections… Any local level consultation, inquiry or decision will be required to confine itself to design matters such as the colour of chimneys and the height of security fences."

The first set of National Developments outlined in the proposals are as follows:

# facilities and infrastructure to support the 2014 Glasgow Commonwealth Games

# a replacement Forth crossing

(3) & (4) The UK and Scottish Governments plan a massive tripling of air traffic. All Scottish airports face expansion by 2050. Passenger movements are planned to grow from 14 million to 50 million passengers by 2030.. (

(5) Government plans to expand aviation whilst reducing other emissions will result in air traffic taking up one quarter of UK emissions by 2050. Currently aviation accounts for 13% of the UK 's climate change impact.

(6) Consultation on the proposals for the Climate Change Bill, with its target of an 80% cut by 2050, end April 23. The proposals have already come in for widespread criticism for omitting aviation and shipping emissions, and for relying solely upon inefficient carbon trading markets to cut emissions.

(7) The December 2007 report by the campaign group HACAN revealed that only 18% of respondents support expansion of UK airports. The report, by Woodnewton Associates for enoughsenough, found there is no public appetite for airport expansion. Only 18% support it. Indeed, 57% of people support "a policy aimed at slowing down the growth in air travel".

More information on the impact of aviation on climate change can be found at: