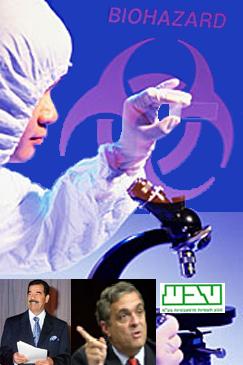 
Un-censored contents from several of these back-channel intelligence traffic messages describe being routed to a long list of top secret U.S. foreign intelligence posts around the world plus key U.S. government agencies located in the United States.


The TELEX messages, believed sent by a Central Intelligence Agency ( CIA ) agent obtaining secret Iraq government information from a high-level Iraq military informant, was actually U.S. government 'raw intelligence' so sensitive it was still classified "yet to be evaluated" but then purposely supplied to foreign intelligence agencies located in Tel Aviv, Israel and Britain.

http://web.archive.org/web/20020209205305/communities.msn.com/AnExCIA/archives.msnw ], followed by U.S. air strikes and more, should now clear up many mysteries.


According to the published words of Britain Prime Minister Tony Blair, "I believe people will understand why the Agencies cannot be specific about the sources, which have formed the judgements, and why we cannot publish everything we know...I and other Ministers have been briefed in detail on the intelligence and are satisfied as to its authority...I believe the assessed intelligence - has established beyond doubt - is, that Saddam has continued:


- Producing Chemical and Biological Weapons;
- Efforts to Develop Nuclear Weapons; and,
- Extended the Range of his Ballistic Missile programme.


The picture presented to me by the Joint Intelligence Committee in recent months has become more - not less - worrying."


An independent and well-researched overview report of evidence provided by the United States International Institute for Strategic Studies ( IISS ) on September 9, 2002 suggested Iraq could assemble nuclear weapons within months of obtaining fissile material from foreign sources.


The British Joint Intelligence Committee work, like the material it analyses, is largely secret.


Significant information was made available to the British Government from secret intelligence sources, which was described in more detail within a document released on September 2, 2002 by the United Kingdom ( UK ) baseed in large part on the work of the UK Joint Intelligence Committee ( JIC ), the heart of British intelligence.


Shortly after 2000, and subsequent to U.S. president George W. Bush Jr. entered the Office of the United States President, the University of Massachusetts' Center For intelligent Information Retrieval ( CIIR ) [

http://ciir.cs.umass.edu/research/ ] website became restricted to the general public but only a few knew why.


In 1997 the Center For Intelligent Information Retrieval ( CIIR ) [


Left unexplained is 'why' U.S. government classified intelligence image documents, although many pertained to legacy events, were nevertheless easily intercepted and optically translated into readable text format were tools freely available to the world across public access internet.


Also left unexplained, is 'why' the U.S. federal government used the University of Massachusetts Center For Intelligent Information Retrieval ( CIIR ) to store image document copies of U.S. government classified documents made freely available to the world across public access internet.


Image documents consisting of classified back-channel intelligence communication traffic messages in TELEX format dated between March 1990 and May 1992 revealed Netherlands company ORVET B.V., which research reveals is a foreign front company of Israel's TEVA PHARMACEUTICALS used in the clandestine supply of 4,000 vials of anthrax purposely supplied and shipped by Israel through their Netherlands subsidiary to Jordan to hide delivery of anthrax to Iraq, then under the control of Sadam Hussein.

http://www.tevapharm.com/about/officers.asp ] 11-years before TEVA changed its subsidiary name from ORPHAHELL B.V. to ORVET B.V. and then 'again' changed its name, 'after' the back-channel intelligence traffic communication TELEXs, to TEVA PHARMA B.V. ( Mijdrecht, Netherlands ) [


Although the 1997 original private party retrieval source of these classified TELEXs for the X-CIA FILES website report entitled, "Iraqi Re-Match Set - Bush vs. Hussein" datelined "IRAQ, Tuwaitha - July 30, 2001" was erased from internet archives by the U.S. government, these TELEXs have been resurrected in their original format to provide the following:


THE NUCLEAR RESEARCH CENTER (NRC) (U).


TEXT: THE NUCLEAR RESEARCH CENTER or NRC AT TUWAITHA HAS NOT ONLY CONTINUED, BUT INCREASED THE PROCUREMENT OF MEDIA FOR CELL CULTURES AND MATERIAL FOR MOLECULAR BIOLOGY AND GENETIC ENGINEERING. THE CENTER IS ALSO PRECURING A CENTRIFUGE SUITABLE FOR VIRUSES, BACTERIOPHAGE AND CELL NUCLEI. SOURCE COMMENT - EVEN THOUGH THE NRC HAS BEEN PROCURING MATERIALS ASSOCIATED WITH GENETIC ENGINEERING AND VIROLOGY, THERE HAVE BEEN NO PUBLICATIONS IN THESE AREAS FROM THIS FACILITY. FOR THAT REASON IT IS SPECULATED THAT THE FACILITY IS AFFILIATED WITH BW.


SUMMARY: IRAQ IS ATTEMPTING TO PROCURE RABIES AND ANTHRAX VACCINES. IRAQ MAY HAVE OBTAINED THE VETERINARY ANTHRAX BOVINE LIVE SPORE VACCINE FOR USE IN HUMANS.


1. AT THE END OF 1991, KIMADIA ( NFI ) SHOWED INTEREST IN THE PROCUREMENT OF AN UNKNOWN QUANTITY OF RABIES VACCINES. A SHIPMENT WAS ALSO TO HAVE BEEN DELIVERED AT THE BEGINNING OF 1992 FROM GERMANY'S KARL KOLB COMPANY TO KIMADIA. THE SHIPMENT WAS TO HAVE BEEN ROUTED VIA AMMAN, JORDAN.


2. AT THE BEGINNING OF THIS YEAR, IRAQ WAS ENGAGED IN THE PROCUREMENT OF 4000 VIALS ( 100 MILLILITERS EACH ) OF ANTHRAX BOVINE LIVE SPORE VACCINE' THIS ACTIVITY WAS CARRIED OUT UNDER THE AUSPICES OF THE UNITED NATIONS' FOOD AND AGRICULTURAL ORGANIZATION or FAO WHICH APPROACHED THE DUTCH ORVET B.V. COMPANY. THE PROJECT WAS DESIGNATED FAO PROJECT OSRO/IRQ/103/FIN.


COMMENTS: SOURCE COMMENT - IN VIEW OF IRAQ'S PRESENT DIFFICULTIES IN OBTAINING HUMAN ANTHRAX VACCINES IT IS POSSIBLE THAT THESE VACCINES, USUALLY INTENDED FOR VETERINARY USE, ARE IN THIS CASE INTENDED FOR IMMUNIZATION OF HUMANS. IT IS RECALLED THAT VETERINARY ANTHRAX VACCINES ARE SUPPOSED TO BE PRODUCED AT THE AL-KINDI LABORATORIES IN ABU-GHRAIB.


1. SOURCE, AT LEAST IN GENERAL TERMS, HAS A FAIRLY ACCURATE INTELLIGENCE OVERVIEW OF THE SITUATION IN THE GULF AS QF 900807 AND HAS NUMEROUS RESOURCES AT HIS DISPOSAL TO SUPPORT HIS ASSESSMENTS.


4. NORMAL PROCEDURES -- CHEMICAL PLANNING IS AN INTERGRAL PART OF ALL IRAQI MILITARY OPERATIONS. WHEN HUSSEIN DECIDES TO USE CHEMICAL WEAPONS HE WILL INFORM THE GENERAL STAFF. THE GENERAL STAFF WILL SUMMON THE CORPS COMMANDERS TO COME TO THE GENERAL STAFF HEADQUARTERS ( HQS ) IMMEDIATELY. ALL COMMANDERS ARE GIVEN A VERBAL CHEMICAL WARNING ORDER AND ARE SHOWN THE ONLY EXISTING CHEMICAL MAP. CORPS COMMANDERS CALL THEIR DIVISION COMMANDERS AND TELL THEM TO PREPARE THEIR TROOPS FOR AN OPPOSING FORCE CHEMICAL ATTACK. FOR EXAMPLE, WHEN IRAQ USED CHEMICAL WEAPONS AGAINST THE IRANIANS, THE IRAQI FRONTLINE TROOPS WERE INFORMED THAT THEY COULD EXPECT AN IRANIAN CHEMICAL ATTACK. WHEN THERE IS INSUFFICIENT TIME TO CONDUCT THIS PROCEDURE, THE CHEMICAL WARNING ORDER BYPASSES ALL ECHELONS AND THE FRONTLINE TROOPS ARE TOLD TO EXPECT AN OPPOSING FORCES ATTACK. COURIERS ARE USED TO RELAY THE INFORMATION.


- Why didn't anyone research publicly available facts in 2001, 'before' the war in Iraq?