"La Pastora Durrut" of the Maquis a heroic story of autonomy.

Hopefully later this year will see a book by José Calvo published which draws on files and archives and interviews and his own attendence as a youth at a trial of one of the "Maquis" those guerillas who offered the last organised resistance against Franco and fascism in Spain from the end of WW2 and the vain hope that the allies would re-establish the legitimate republic through to their dwinding end in the 60's.

His book will at last tell the story of One of the Maquis who has long needed reclaiming from the lies and distortions of the past.

An individual who took the nom de guerre as a Maquis, or member of the AGLA (usually denominated as communist), of "Durruti" (after the honoured Barcelona anarchist). Before that at the age of 32 he had taken the equally momenous step of taking the name "Florencio" in replacement of the "Teresa" which his parents upon seeing his genital malformation had registered on his birth certificate "to avoid later complications" & it was said "military conscription". 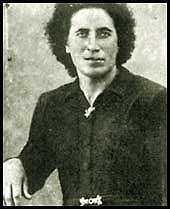 a brave man who lived and fought bravely for liberty in a darkened age.

Teresa / Florencio Pla Meseguer was born in 1917 on a small farmstead in the Tossal de la Pallissa mountains, its nearest village was Vallibona itself closest to the town of Castellón in the Valencian region of the Catalan speaking eastern Iberian peninsula.

His remaining photos show clearly the gender confusion that this young man must have felt as he grew to maturity mostly hidden from any meaningful socialisation by his family who had put him to work as a shepherd dressed as a woman on the mountainside, hence the name "La Pastora" or shepherdess.

At the age of 32, he was subjected to an interrogation and sexual assualt by members of the Francoist "Guardia Civil" who characteristically given their role of enforcing parochial structures turned a village gibe into an excuse for torture. Such was and is how fascism is installed - by the most mediocre and insensitive use of violence.

Whatever the exact incidents of the occurence, Teresa never returned to female clothing and henceforth took the name Florencio. I have written many times that "autonomy begins with self", which of course it does for "auto-" means self, but I have written it many times believing that the act of naming oneself or declaring oneself is an essential rite of passage to individuation and liberty. It is my opinion that such a rite of passage is not one which may only initiate those who are or were "classified" as different, it can be experienced just as easily [to quote myself again] "to take the first step in the class war and recognise which side you're on".

Nonetheless it is a rite of passage which is familiar to many minorities who arguably today find their most tolerated "official fomentation of equality" in the modern Spanish state. But Francoist fascism which still holds more than a quarter million graves of republicans of all hues as well as the poet Garcia Lorca whose own prophecy of his death still rings a bitter sad bell over such catharsis which is modern Spain's equality laws on marriage or gender reassignment on official documentation :-

She who would be hunted through the posters of Franco's Spain as a member of the XXIII (23) sector of the "Agrupación de Guerrilleros de Levante y Aragón (AGLA) as "La Pastora" a "lesbian woman with criminal tendencies".

He was known as “Durruti” to his comrades in arms and their supporters in the territory [which the 23rd sector under the "command" of Jesús Caellas Aymeric, "Carlos the Catalan" took over from the 17th which had extended from Teruel in Aragon to Castellon in Valencia to also engage in Zaragoza]

One by one, or handful of handful the Maquis were literally hounded down and killed as their initial successes faltered for many reasons not least the decision by the allied powers not to restore the legitimate 2nd Spanish republic, and thus the ending of the supply lines which had allowed them antibiotics whilst Franco's troops were still bribing villages with sausage meat.

"Durruti" / "La Pastora" - Teresa / Florencio Pla Meseguer built a hideout in a gorge in the mountains of less than 3 metres length and 1.5 metres width camoflauged with branches, from whence any approaching could be seen. Several years of subsistence passed and his voice was lost for want of practise. One can only imagine the lonliness and agony of not only being a fugitive but certain that all others considered him to be a monster as well.

Eventually he tried to make the crossing into Andorra and what would have been the relative freedom of exile in France. He was arrested on the 5th of May, 1960 and tried as Florencio. Sentenced to death, this was later commuted and he would wait till the "general amnesty" of 1977 to sleep without a locked door or weapon by his side.

The project to teach the curent and next generation about them and all who resisted Franco and Fascism in the Spanish state is generally called "reclaiming memory!" one of whose main groups "The association for reclaiming historical memory" have to date counted on many regional and some state-wide laws and resolutions.

To remember means not to forget.

The book "La Pastora" by José Calvo Segarra will be published later this year. & will count on reviews I expect in the Anarchist as well as other press.

Youtube Video which condenses data on the 23rd sector of AGLA