Here are some (badly translated) statements from Malmo AFA and others regarding the recent riots in the city. Following that is some background to the events. 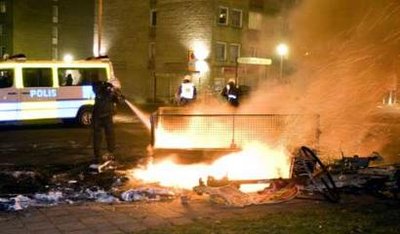 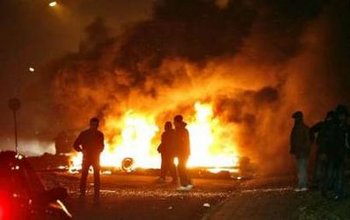 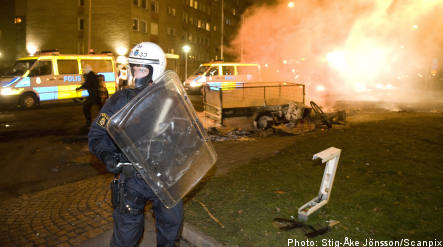 Riots in the Manor in Rosengard continues. Young people who occupied the basement of the mosque Ramel road is tired of police abuse and taken to more drastic methods to be seen and heard, when they had not heard in any other way. In this, they have helped and supported by activists from Malmö autonomous environment. We support the young people in the Manor just as we committed ourselves in squatter fights in Malmo and Lund and fight for the youth house. Fight for frirum is important, whether out of "young Muslims" or "Swedes." It is important that we ensure that we have common interests with other groups than other autonomous, and discrimination based on ethnicity and religion and abuse from authorities and the police is something we always have to fight. We therefore call on all Trade activists to get to the Manor this weekend and show their support for the young people there and their struggle.

Statement put out by AFA Malmo:

Protests in Rosengard is self-defense against the class

Young people occupied the room for 23 days. During those days was almost no discussion in the newspapers. At the eviction on Wednesday December 17, the police went in with a great strength. Dogs and pepper spray were used against young people gathered there to defend their local. After this incident the media has suddenly become very interested in what happens in Rosengard. But again, the issue ended up in the shadows. We know that you journalists like violence, you eat it for breakfast, breathe it during the day and dream about it at night. It is therefore not surprising that Rosengard again is focused on the front page.
Manor is an area of Rosengard, which has long been neglected. Preschools dare not let their children play on the part of the courtyard are among others due to open the drain and dangerous electricity which may hang freely. The people who live in the Manor may not pitch for his complaint about the standard of the apartments and the lack of utemiljön. The three landlords in the area Contentus, Newsec and EIA of Malmö has, together with the Municipal Ilmar Reepalu (s), Rosengard city politicians and Residents' Association formed a working group called the Estates Group. Malmo is composed of different districts, which look very different. In some areas of Rosengard, such as the Manor, living many people with foreign backgrounds. City sees it as a problem that the area is crowded lived and that people are segregated. Additional debt on the residents of the area by landlords are consistently blaming the wear on the tenants, rather than the total lack of maintenance that has characterized the town for a long time. What is the politicians' solution to the problems?

Within the framework of the Manor group's work, it does not seem possible to find a solution to people's overcrowding by, for example, build more rental flats or raise the standards of the apartments which already exist. Instead, they want to throw out a number of compounds from a local business they had in a long time, an activity that has been a gathering place for young people after school hours. Politicians claim that Rosengard is the city of Malmo who spends most of the activities for young people. And so be it, it is not so much emphasis necessary to outdo the other city, the youth activities.

Ilmar Reepalu and accomplices in the Tenants' Association believes that the activities of the locale does not fit the area's new profile. What is it for activities that fit in? Manor Group proposes instead that room now to contain an activity known as Boskolan, driven by the Tenants' Association. There will be immigrants learn to live on Swedish way. It has not come with any explanation of what to live on Swedish way means. It is cramped lived in the Manor probably depends unlikely that people want to live crowded, rather that the politicians in City Hall are not interested in building housing for ordinary people. The only option in today's class society is being forced to live in apartments managed by SHARK who just want shoes themselves. The Malmö is a segregated city we know already, the situation is hardly better of the municipality entirely let the free market rule over new construction.

People are tired. They are tired of their voices are not heard and that once they noted, so the question is not on the merits of the case anymore. When society wants to make a contribution in the district will send the police. Police targeted weapons against children. Instead of investing resources in leisure activities for young people, jobs for those who want jobs and decent housing, and your government watchdogs in order to maintain the monopoly of violence.

In the media, police have in recent days made a big thing of it is traveling behind many of the violence. They called for traveling are other residents in Malmo, no traveling troublemakers who have nothing better to do than to create riots. We who have been there living in Malmo and Rosengard is a part of Malmo which people both live in and visit daily. By attempting to separate the Rosengard from other Malmo to assist the media to further exotifiera image of the district. Rosengard is not an isolated island living their own lives. The area affected, like the rest of Malmo of the policies of the current situation, whether it is socialist or bourgeois.

The district politicians and the police are terrified of the unrest that is currently underway at Rosengard will spread to other parts of Malmo. Events such as those on Rosengard will continue to flare up as long as there is an ongoing disarmament of leisure activities around Sweden. This is not a point of order that can be solved with batons and pepper spray, it is a social problem that politicians themselves have created. Now when they painted himself into a corner they desperately try to draw attention elsewhere. So grateful that once more put the blame on the many young people living in the district.

It is clear that politicians can not solve the problems they themselves created. The media is not interested in highlighting the real problems that create class society is not so surprising. It sells just no news. All fine talk of a democratic dialogue works as long as people are shut up and is satisfied with the little they get. The welfare policies that politicians say they will bring is an insult to the working class, the only possibility for change is självorganiserng. None of the rights enjoyed working today have been free, they have come about thanks to their own initiative from below by collective struggle. This is regardless of whether it is right to a decent working environment, meaningful leisure activities or homes free of cockroaches.

We are not surprised by the development of Rosengard and sees it as a logical result of the lack of societal resources to the residents there. That a Shell Mack fire is nothing to get worked up over, it happened throughout the 1990s by understandable reasons, and will happen again. To some trash cans into the fire is not in proportion to the violence that the police against Malmö's young people. The police have a proportionality principle, they will work after, a principle that they consistently seem to forget in some contexts. Criminal damage is not violent riots, to defend themselves against police attacks are no riots, there is self-defense. Direct action has always and will always, to be used by people to change and take power over their daily lives. To quote the IHT: Anger and despair are strong driving forces. At best, they can be turned into something constructive.

Riot police from Stockholm and Gothenburg are being sent to provide back-up for their colleagues in Malmö as tensions in the southern city continue to flare.

After two nights of intensive rioting, police in the city requested assistance from units specially trained to deal with mass violent demonstrations.

"We don't think it's over yet. We think it's going to continue and we have to be prepared to work around the clock," said regional police spokesman Charley Nilsson.

Emotions have been running high in Malmö's predominantly immigrant Rosengård district since police forcibly removed three squatters from the basement offices of an Islamic cultural centre. The premises had been occupied since November 24th as part of a protest against the landlord’s decision not to renew the association’s lease for the space, which it had held for the past fifteen years.

Thursday night saw the most extreme rioting in Rosengård since the disturbances began. Police were pelted with Molotov cocktails and bomb threats were issued against a local petrol station.

Police spokeswoman Ewa-Gun Westford said she would not even hazard a guess as to how many police vehicles were damaged in the rioting, as locals were reportedly joined by left-wing extremists, or "autonomists", from outside the area.

The city's fire and rescue services have been refusing to enter the area until their safety can be guaranteed.

One person was arrested for rioting, while another was detained for disturbing the peace.

By 3am on Friday the situation had stabilized somewhat and police were able to move in and remove burning trailers and other objects from the streets with the aid of a bulldozer.