Should George W. Bush Be Arrested in Calgary, Alberta, To Be Tried For International Crimes? ... Serious allegations of criminality are swirling around ex-US President George W. Bush and current Sudanese President Omar al-Bashir. In late February of 2009 it was reported that the Hague-based International Criminal Court was preparing to issue a warrant for al-Bashir alleging his culpability for genocide, war crimes, and crimes against humanity. As the documents were being prepared against Sudan’s head of state, ex-President Bush was preparing to initiate a series of high-paying speaking engagements beginning in Calgary Alberta on March 17. Bush’s visit to Alberta’s oil capital tests the consistency and authenticity of the Canadian government’s "unequivocal" position that "Canada is not and will not become a safe haven for persons involved in war crimes, crimes against humanity or other reprehensible acts." 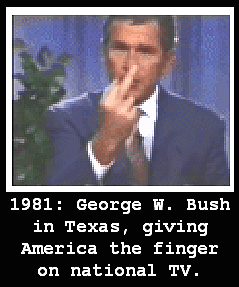 To become a Member of Global Research:

http://www.globalresearch.ca/index.php?context=section&sectionName=membership
The CRG grants permission to cross-post original Global Research articles on community internet sites as long as the text & title are not modified. The source and the author's copyright must be displayed. For publication of Global Research articles in print or other forms including commercial internet sites, contact:

www.globalresearch.ca contains copyrighted material the use of which has not always been specifically authorized by the copyright owner. We are making such material available to our readers under the provisions of "fair use" in an effort to advance a better understanding of political, economic and social issues. The material on this site is distributed without profit to those who have expressed a prior interest in receiving it for research and educational purposes. If you wish to use copyrighted material for purposes other than "fair use" you must request permission from the copyright owner.

This text by Anthony J. Hall, Professor of Globalization Studies at the University of Lethbridge was presented at the annual distinguished lecture sponsored by the Sociology Department of the University of Winnipeg, 6 March, 2009 - The url address of this article is:

http://www.globalresearch.ca/PrintArticle.php?articleId=12586
-
BUSH CRIME FAMILY LINKS: Bush Family Connection Research Sites ...
The following are links to information about the Bush family, the
Bush cabinet appointees and the corporations, think tanks and
foundations that are behind the GW Bush administration. My
including these links to materials other than the articles I wrote
is not to be considered an endorsement of any statement they
contain. .... Bush family background .... Bush, Hitler, Skull and Bones connection ....... 4/14/1990 New York Times quotes George Bush as stating,
"Lets forgive the Nazi war criminals." ..... More .........

http://www.serendipity.li/jsmill/bushcrimefamily.htm
-
Picture: George W. Bush 1981 in Texas, giving America the finger on national TV. Described by Leola McConnell as one of the most morally bankrupt people she ever met in her life ,,,,,,