Brian Haw will shortly clock up day 3,000 in Parliament Square

On Wednesday August 19th Parliament peace protester Brian Haw will clock up 3,000 days and nights of his vigil opposite the Houses of Parlaiment. Why not come along and show solidarity? 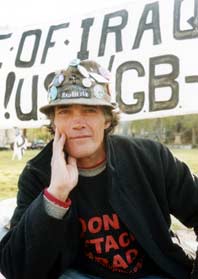 Press release for Brian Haw’s 3,000th day in the Square

I would like to draw your attention to the ongoing demonstration by London Parliament Square peace campaigner Brian Haw. He has been on his one-man peace protest for over 8 years now since June 2nd 2001. His protest was initially against the injustice and suffering caused to the people of Iraq by the UN economic sanctions and the bombing of the country by the US and UK. Eight years later, after invasion and occupation, Iraqis have lived through another terrible period and western troops have pulled out to continue their war in Afghanistan with the US and NATO bombing claiming many civilian casualties.

Wednesday August 19th will see him reach day 3,000 (three thousand) of his vigil. Surely this is a very noteworthy performance – imagine living and sleeping in Parliament Square for such a long time – he uses the public conveniences at Westminster underground (subway) station and gets food from supporters. Despite hassle from the police and others, Brian and supporters remain lawfully opposite Parliament reminding those in power of the costs of their wars.

The MPs (Members of Parliament) across the road in the House of Commons were in the news constantly in June 2009 with details of many fraudulent expense claims. By contrast, Brian Haw, the guy who sleeps directly opposite them, and who has not a corrupt bone in his body received no media attention at all.

Here are some recent photos of his protest taken last month: