The Kray twins in Parliament Square. 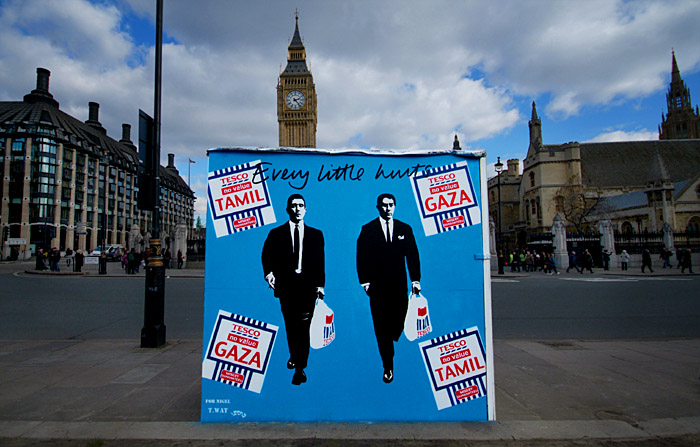 "We were fucking untouchable"

In February the artist T.WAT visited the square and with his assistant Leeks, decorated the newly erected 'monolith' with the stencil work to bring attention to the role the British mass outlet superstore chain, Tesco, plays in funding and supporting regimes around the world including Israel, scene of truly barbarous cruelty meted out to the domestic population of Gaza in late 2008 and early 2009 and the Ultra-nationalist regime in Sri Lanka which waged an abhorrent 'final assault' against the Tamil people in the summer of 2009, a conflict that claimed the lives of up to 30,000 people and sent a further third of a million into concentration camps.

Both conflicts were waged with the full consent of the British Labour Government. The former through the historically habitual British support of Israel and its cartels against the Palestinian people, through media and ordinary diplomacy, and the latter through the idiocy of the British Ambassador to the UN, Sir John Sawyers during a UN security Council session circa 2009 in which he claimed that the Tamil Tigers needed to be 'brought to an end'. The statement served to give a green light to the repugnant Rajapaksa regime which immediately set about deploying its military against soft civilians on the island of Sri Lanka/Ceylon. Mr Sawyers was rewarded for his part in the monstrous venture that followed by being promoted to the Chief of the Foreign Security Services at MI6 on his return to the UK.

The Sri Lankan military, like its Israeli counterpart, now stands accused of war crimes. Even so, the British Government continue to give aid and support to both regimes, ignoring all complainants no matter what the complaint.

“Never apologise...never explain”. So goes the mantra of Parliamentary dignity.

The symbolism of two of Britain's most notorious gangsters parading with their shopping outside the seat of the British Government can hardly be lost in the current domestic political environment either.

After billions have been spent bailing out banks and billions more being dropped into the bottomless pit that is the 'War on Terror', the financial cost to the small nation of the United Kingdom is yet to be properly felt. As the British people are asked to choose their political candidates to vote for in the General Election 2010, they do so with the long shadow of financial chaos looming over them. Domestic UK businesses reporting that things 'aren't that bad' right now, does not defer the full weight of the crisis or the fact that the worst is yet to appear. The next Government will be forced to deal with the fallout from these crises and the backlash is likely to be severe. A backlash that is likely to be doubly severe if that Government is Labour, the architect of the current crises.

And then there is the MP's expenses difficulty. Of course it isn't known whether the Kray outfit had expense accounts...it isn't even known whether they could read and write, but if they could would their claims have been sensible and honest and properly reported?

That's a difficult one!

Perhaps the Kray's may have chosen to be clever and compile the law to ensure that it was as accommodating as possible to the things that could be claimed for. Perhaps they may have decided to hide their claims away from public scrutiny ensuring that only relentless chasing of the 'detail' through freedom of information requests would ever lead to them being made public. They could, of course, have had the speaker of the House and all round fisherman's friend block any attempt at investigation with the usual 'informed' and 'too dignified to be bothered' Parliamentary wave of the hand. Perhaps they may have simply counted on their 'friends' in the media not to ask uncomfortable questions.

But then again they may simply have opted to include absolutely everything in their claims, and then shot anyone that asked questions!

It is, of course, impossible to know as the Kray twins are not MP's and are both dead so we can't ask them.

The artwork is currently in Parliament Square for viewing. Drop by and have a chat, No appointment necessary...bring your own camera.

Generalised System of Preferences (GSP) Sri Lanka which directly provides income for the Sri Lankan Government, much of which has paid for military hardware for its army.

Tesco sources and sells Carmel-Agrexco produce. This is grown in the occupied territories but sold at a profit by the Israeli State, again the profits are used for purchase of military hardware.

This is just one of a number of examples of the Israeli State operating a policy of enforced economic dependency. By operating enforced dependency, you are able to force your enemy to pay for its own destruction. This is a strategy the Zionists are especially fond of.