Venezuela: the myth of "Eco-socialism of the XXI Century"

* This text, which appeared in El Libertario # 58, March-April 2010, critically examines what has been meaning the government of Hugo Chavez from an environmental point of view, highlighting the clear separation between the rhetoric speeches that are emitted from power and the specific facts being promoted and implemented. 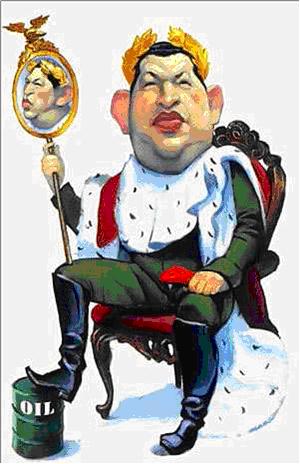 [The author is Professor and Researcher at the Simon Bolivar University in Caracas. This contribution is the revised excerpt from a longer article appeared in Spanish in the Journal of Economics and Social Sciences (FACES-UCV) entitled "XXI Century Eco-socialism and Bolivarian Development Model: the myths of environmental sustainability and participatory democracy in Venezuela ", 2009, vol. 15, No. 1, pp.187-223 (Available on

http://www.scielo.org.ve/pdf/rvecs/v15n1/art10.pdf), where quoted references are marked with appropriate details. Not included here for space reasons.]

Venezuela is a country of mining and extractive industry economy, whose model development has been based on the exploitation of oil and other non renewable natural resources that causes strong impacts on the environment. More than a decade, some researchers (Garcia Guadilla et al, 1997) strongly questioned the sustainability of development models in the nineties under the presidencies of C. A. Perez and R. Caldera. In the decade 1999-2009 the government has blamed the "savage capitalism and neoliberal policies” and consequently, property and private exploitation of resources for the environmental problems, despite that current exploitation of these resources and the design of economic policies that support the so-called Bolivarian Development Model reproduce these practices labelled as "neoliberal or savage capitalism", causing negative environmental impacts same strong or higher than in the past.

In the decade 1999-2009, the conflicts and protests for environmental post materialistic and materialistic demands, have had as main actors environmental organizations, indigenous communities, public sectors and even human rights organizations; basing its struggle on the 1999 Constitution, approved by a Constituent Process, that did incorporate participatory democracy and environmental rights, both socio-cultural and indigenous, among others (García Guadilla, 2001). Many of these rights have been violated, and participatory democracy has not resulted in an environmental democracy when resolving such conflicts, which in fact have been multiplied since Hugo Chavez became President of the Republic.

Some of the most significant socio-environmental conflicts of this decade in Venezuela have to do with the negative impacts of oil exploitation and mining, and the potential impacts associated with energy mega-projects, proposed both nationally and internationally, to supposedly reduce the U.S. dependence and achieving the integration of Latin America and the Caribbean by the now called Bolivarian Alliance for Our Americas People (ALBA).

The Bolivarian Development Model has been defined discursively by Government spokesmen including President Chavez as "sustainable, endogenous, equitable and participatory" (Fergusson undated; Francia 2007, Perez, undated; Velasco, 2005.2007; Ministery of Science and Technology, undated). The electoral tender made in 1998 by the then presidential candidate Hugo Chavez to support the struggles that environmentalists and indigenous were doing at the time around their conflicts, along with his environmental sustainability speech and criticism of the "neo-liberalism and wild capitalism ", created an expectation among the social movements that if he became president would set a vision more consonant with environmental sustainable development.

However, these expectations were frustrated because according to the announcement made in 2005 by President Chavez, it is contemplated to double the oil production for 2012 through the exploitation of 500,000 km2 of marine platform and over 500,000 km2 in mainland, plus the construction of new refineries and a gas complex in the Gulf of Paria. Other activities included in those development plans are mining extractions in the Imataca Forest Reserve, the substantial increase in coal mining in the Sierra de Perija and increased hydropower production for export to Brazil through electric power lines. The economic crisis along with the government inefficiency have delayed or halted those plans, but if they ever settle, it will affect almost the entire territory, including areas that are now environmentally protected by the laws and Constitution such as Canaima National Park where the Gran Sabana is placed, Imataca Forest Reserve and the basins of the country main rivers. These plans reflect continuity with the policies of previous governments, branded by President Chavez as "neoliberals, capitalists and predators of the environment."

As for the Caribbean and South America, Venezuela is one of the twelve member countries of the Initiative for the Integration of South American Regional Infrastructure (IIRSA), which provides 507 projects with high environmental and socio-cultural impacts spread over ten areas of development, involving construction of major works infrastructure (communication and transport, roads, dams, gas pipelines and waterways) to the length and breadth of South America (AMIGRANSA, 2005). The mega-plan Great Southern Gas Pipeline, one of the most important plans to achieve energy integration between Venezuela, Brazil and Argentina, among other countries and base of the ALBA project, requires cross 8000 kilometres, so it would affect extremely fragile and bio diverse areas which, according with some researchers, are the latest environmental reserves that exist in Latin America. As in the previous case, these mega-plans are paralyzed or delayed due to the economic crisis, but if they’re activated, the impacts on the environment could be compared with the Free Trade Area of the Americas (FTAA), ideological mother of the ALBA.

The development model based in the exploitation of hydrocarbons that the Venezuelan government has proposed on a national level, for countries part of the ALBA and the South American and Caribbean region that participates in the IIRSA, has been strongly questioned by the environmental, indigenous and human rights movements due to the large scale environmental and socio-cultural impacts that will generate. In various discussions on the subject made in the World Social Forum carried out in Caracas in January 2006, indigenous social movements and environmentalists of Venezuela and the world expressed strong criticism against the negative effects of oil exploitation, being the largest mobilization of the Forum the march against exploitation and expansion of coal developments in the Sierra de Perija in support of life, environment, cultural identity and, in general, rights sanctioned in the Bolivarian Constitution of 1999 (Soberania.org.ve, 2006). Currently, there are frequent protests against negative effects of oil and gas in Ecuador and Venezuela, and questioning via national and international digital environmental networks such as oilwatch.org, maippa.org, soberanía.org and amigransa.blogia.com; because these spaces are privileged and globalized electronic networks of resistance against the negative impacts of oil and gas exploitation in tropical countries.

In Venezuela as in the whole globalized world, the logic behind social movements is to face "neoliberal policy" whether the government has a "anti-neoliberal discourse", which means that the Bolivarian Development Model, like the other governments that are called left, can generate resistance and mobilization on the part of those movements which demand not only materialistic values but also respect for human rights, own culture, gender equity and a healthy environment. Therefore this can not be understood solely with the logic of neoliberalism or anti- neoliberalism, because both can go against the promotion of these values.

In the case of Venezuela, such resistance movements and proposals can come both from within and outside Chavez circles because of the big ideological heterogeneity of the groups supporting the president; and given the lack of a shared and clear ideological project within the Chavez movement, environmental policies strategies can be woven that do not necessarily have a reference in the anti-neoliberalism or neoliberalism. This could be the case of Venezuelans environmental and indigenous social movements that, while by definition are anti-neoliberal and many of its members support the president Chavez, transcend this dichotomy questioning the model of “civilization” and demand a transformation on the political, cultural, gender, social and environmental rationality.

So far, the great ideological heterogeneity and class differences between environmentalists, has hampered the formulation of collective proposals and has contributed to the estrangement between different social movements that in the past were articulated around strategic alliances of environmentalists. All this seems to affect the expanded environmental movement, the indigenous and human rights organizations, that has lost their power as a result. (García Guadilla & Lagorio, 2006): the missing of an objective reading on the socio-environmental crisis and the lack of a joint strategy about alternative collective proposals related with their identity and constitutionally support, have contributed to this weakening. While ideological alliances become unrealistic given the large heterogeneity and polarization, the protests against a predator model that cause big impacts on the environment and the proposals to "build the new meanings, languages and symbols "of the new model of civilization could be channelled through mobilizations, virtual or real, and new forms of resistance in communities.

_For a consistent Eco-Socialism_

The anti-neoliberal speech of the Bolivarian Development Model can be a first step towards the implementation of a more fair model; nonetheless the rationality implicit in the plans and policies planned within the XXI century Eco-socialism in Venezuela attempt against it, since the productivist, instrumental and developmental logic has not change. In addition, the conception of revolutionary transformation implicit in that model is not different from the '60s and, in any case, its guidelines come from above. Can we speak of justice, social equity and solidarity when the development model does not take into account the environmental dimension or intergenerational equity?, when it sacrifice the welfare and the right to cultural identity of its Indigenous communities for economic development, or a Latin American integration that transcends the expectations of welfare into the national actors involved?, when the model do not recognize the negative impacts that the designed mega-projects have (call these gas pipelines, oil pipelines, or large infrastructure projects) and whose economic costs, socio-cultural and environmental impacts are "invisible" for the sake of a new vision of Latin American integration?; can we speak of a revolutionary model that does not stimulate more equitable practices and relationships with the environment, their communities and future generations?

The construction of the XXI Century Eco-socialism in Venezuela passes, first, to overcome the deep gap between the rhetoric discourse and the reality of the development model; secondly, it requires that the desirable model of civilization is built collectively and not to be imposed from above as in the present and, finally, that his source of inspiration is the transition to a post-petroleum society, such as the one envisioned by Salvador De La Plaza, an eminent Venezuelan historian and politician, who warned about the harmful effects of oil and the need to control them to achieve national sovereignty. He implicitly noted that the oil industry to be sustainable requires that the environment benefits and costs arising from the exploitation of hydrocarbons needs to be listed in the "accounting" not only economically but also cultural and socio-environmental.

This view is not very different from Kovel & Lowry (2002) who in their Eco-socialist Manifesto indicate that a society with a high degree of harmony with nature should lead to "the extinction of dependence of the fossil fuels”, which they considered attached to industrial capitalism. Get rid of this dependence "can provide material base for the liberation of the oppressed countries by oil imperialism "and reduce global warming and other problems arising from the ecological crisis.