Bristol eco-village set up camp this week with huge support from the local people and activists from all over the country. The off-grid urban community kicked off last Saturday (17th) on a patch of waste land in St.Werburghs previously notorious for fly tipping, arson attacks and hard drug users. 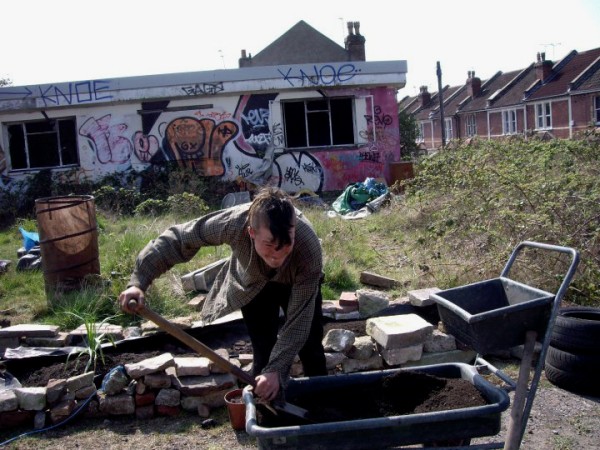 The 'swoop' to take the land started with activists forming a walking block and cycle block, trailed by an obligatory police presence. After a wild goose chase to lose the cops (who eventually got bored and wandered off) both teams took the site at about midday.

The first day was spent clearing the site of rubbish, yielding a treasure trove of waste building materials which have been put to good use with tyre walls for an earthship being constructed, two composting loos on the go and recycling facilities sorted.

St. Werburghs is known for being a 'green' part of Bristol with a city farm and a load of self-build eco houses already in action, so the neighbours to the site have reacted with gusto. Residents have donated tools, a grey water system and polytunnel, as well as plants and seedlings, which were planted with help from the kids from the primary school opposite.

Police have reacted positively to the squat and offered their support to help prevent the illegal eviction of the camp on Wednesday (21st). Bailiffs had turned up the day before and served occupants with an eviction notice (after which a fire was mysteriously started in the corner of the site), and a call out went out for people to help protect the village. After a good turnout of supporters, the bailiffs didn't show, having been served notice that the eviction would be illegal under common and criminal law. Another attempt to evict is expected soon, so campers are urging people to continue to respond to call-outs.

One camper told SchNEWS that the collective plans to set up the site with buildings and a flourishing garden, then leave it for the local community to enjoy before moving on to another piece of derelict land that needs regeneration. The camp would love to have visitors for the day or to stay for longer so grab your tools and gardening gloves and get down to the site to help green-up an urban wasteland.

The Bristol project was inspired by green-fingered activists in London who set up an eco-village in Kew Bridge in June 2009. ( See SchNEWS 677 | 679 | 682 and Indymedia) This provided an example of post-peak oil, sustainable, urban living created from capitalist society's waste - fast turning into a thriving community space which is still going strong nearly a year later.

The two hectare site had been unoccupied for a grand total of 23 years after failed development plans for an 8 storey block of flats were continuously rejected at the planning stage. The sqautted land has been left alone by the landowners who have not tried to evict the occupants, and by managing to keep the local residents and bobbies sweet, the camp is now a hub of community interaction. There is a packed weekly itinerary of workshops including permaculture, cookery and art, wild food walks around the local area, public meetings and guided tour open days. The site is also a launch pad for protest with people getting involved with demos like the anti-counter terror expo action, and the village is closed on Mondays as the occupants go and demo outside the MOD and 'emanate love' to promote peace.

With 30 permanent residents, 9 of whom are original crew from the swoop at the site, they also welcome visitors with a custom built guest house if you want to stay (although call first to check if there's space), and also encourage any day visitors to come and help with the community vegetable and herb garden or just to come and chill out.

The eco-village phenomena is not a new concept, with a six-month long community set up in 1996 (See SchNEWS 73 | 95) by a collective called Pure Genius, who occupied a site in Wandsworth before being evicted to make way for a supermarket and flats (who says nothing changes...). The land there had previously been empty for six years and was owned by drinks giant Guinness. This camp was however plagued by problems caused by the more fringe members of society flocking to a place that was an 'autonomous safe space', resulting in personality clashes and conflicts of interest caused by people who, to quote < a href="www.schnews.org.uk">SchNEWS from back in the day, “people not willing, or able, to take responsibility for their own actions”. Luckily this does not seem to be an issue facing the more recent eco-villages.

The action of squatting unused land based on principals of harmony with the land and equality goes back further to before anyone had even come up with the genius idea of abbreviating ecology into a soundbite, and when villages had composting loos as standard. The Digger movement which began in 1649 has been heralded as the prime inspiration for all of these modern day actions. This network of people in communes started to claim land after the English Civil War. After the execution of Charles I, a political movement started in protest of the treatment of the common people who had fought and died for supposed more egalitarian parliamentary system, while the MPs lived in luxurious comfort (sound familiar..?). The network however was quickly squashed by the military who went round smashing up all the settlements. (ditto)

All the villages are flourishing today thanks to the active participation of the local communities around them and people coming from all around the country to get involved in this ground-up active movement. To keep these collectives as productive and successful spaces, go and visit for a workshop or a chat, or even better, start one up yourself in a neglected spot near you.

* The Bristol Eco-Village is on land between the M32 and Saxon Rd, Bristol, BS2 9SH - for map here

* There are currently two other occupied community gardens, both of which were toxic, disused petrol station sites, and are now thriving gardens and community spaces: The Lewes Road Community Garden in Brighton has been an oasis of green on a grinding high street since last May (See SchNEWS 680) www.lewesroadcommunitygarden.org, see also Facebook group of the same name.
In East Oxford, the Barracks Lane Community Garden has been running since 2007, with regular events see www.barrackslanegarden.org.uk

Also in SchNEWS 719: Crackdown After Death In Detention Centre | Taken To The Cleaners | Qulla Surprise |Sieg Heil-lywood |The Full English |Put Yer Bacton Into It |And Finally