The EDL in Bradford would mean trouble

The English Defence League plan to hold their biggest ever trouble causing demo in Bradford this August. But in a city like Bradford, can we really expect this one to pass off peacefully? And after the aftermath of 2001 would we not expect protests like these in Bradford to be banned? 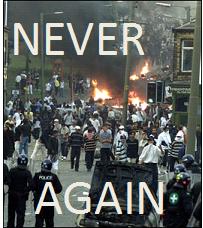 You might be aware that the in 2001, Bradford experienced the UK's worst race riots for many years. It was caused by just a few National Front members stirring up trouble. In August this year, the English Defence League (a Far Right Anti-Muslim Organisation) will flock to Bradford in their thousands. You can guess what will happen, and it won't be peaceful by any means.

They say the demo will be against the 'Islamification' of our Country (a load of propaganda rubbish) and against Islamic Extremism. So how 5000 wannabe football hooligans drinking cans of lager in Bradford put a stop to Terrorism? What’s the real reason for them coming here? And why do they need to turn up here pretending to be Army Soldiers in their ridiculous divisions- combat 18 style? What purpose does this march serve other than to wind up people who actually live in Bradford?

The members of the EDL have made it clear they want to cause damage to the already fragile race relations in Bradford and worst of all, try and provoke a response from the Asian community. Just one racist chant could trigger off something massive. And unfortunately, they will probably will get the response which they are looking for.

After the devastating Race Riots in Bradford in 2001, we can't afford to let it happen again. The city’s public image is already bad enough, and the city has barely recovered since the last riot. There have already been warnings from the EDL that to keep women and children away from the planned demo and advice to members to purchase body armour. Their recent comments to the Guardian saying, "Bradford will be huge and it has to be hit. It's going to be fun", shows how much of a terror threat the EDL will be to Bradford. This city is different from any other place the EDL have gone to, we have all seen it before what happened here before, it cannot happen again. I think it’s fair to say the people of Bradford don’t want any more race riots or violence and they certainly do not want a repeat of 2001. They EDL will not be welcomed here.

Searchlight (Anti-Racist organisation) have already started a campaign to try and stop the EDL from coming to Bradford via the Home Secretary. They’ve set up a petition for this which can be found here:

http://www.hopenothate.org.uk/action/stop-the-hate-march.php
Please take give just a few seconds of your time to sign it. This is a method which proven to have worked before, 12,000 people signed a petition to Ban the EDL from having a Static Protest in Luton and it worked.

In addition to this, a Facebook campaign has been set up. It boosts a strong 3200+ members and they could do with some more. The aim of the campaign is to encourage communication with local MPs and Councillors as well as work with the Home Office and West Yorkshire Police to stop the EDL from coming here. The more members they have the more powerful we are and because of their huge support, the Government will have listen to us and the people of Bradford.

The campaign can be found here, it only requires a click on a button to join up:

If the EDL get their way, and they get the violent reaction from the Muslims which they are looking for, the media will say ‘Peaceful Protesters against terrorism attacked by Muslim Youth’ –which will look very bad. The EDL will get a huge surge in popularity and so will the far fight AKA the BNP. There is every chance we can get them banned from Bradford, and if not, there is a lot which can be done to minimize the dangers of the EDL coming here and prevent another riot.