Democracy Live? It looks pretty dead to me...

Article about a recent House of Lords debate of 8th Nov 2010. Following a question by Baroness Trumpington of the Conservative party asking: "Is any agency responsible the removal of those occupying the pavement in Parliament Square?" , Home Office Minister Baroness Neville-Jones declares the UK government's intention to bring in new legislation to remove the Parliament Square protesters. 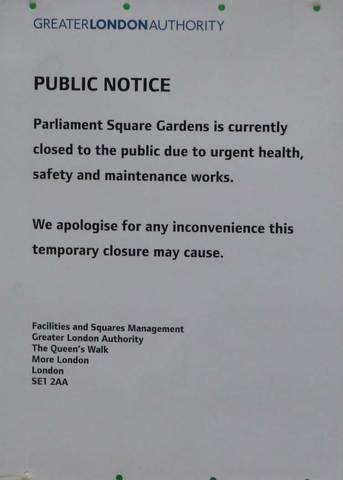 House of Lords debate. 8th Nov 2010 Following a question by Baroness Trumpington of the Conservative party asking: "Is any agency responsible the removal of those occupying the pavement in Parliament Square?" , Home Office Minister Baroness Neville-Jones declares the UK government's intention to bring in new legislation to remove the Parliament Square protesters.

I actually feel nauseous having just watched 7 minutes of a House of Lords debate in which peers refer to the protesters of Parliament Square as 'squatters' and 'litter'. How else is one supposed to feel upon watching the tiny elite of British society - an elite which has facilitated two illegal wars in 9 years, and so is therefore an elite populated by war criminals - chortling and guffawing their way through a discussion of how best to proceed in limiting the right of public protest. At the bottom of the screen we are told that we are viewing 'Democracy - Live', a democracy where those discussing are unelected and those being discussed have no formal right of reply.

If the 'noble' Lords had bothered to seek out an informed opinion in order to balance out the debate, I believe many of those involved with the Parliament Square protests would have raised the following points:

1. Access - The 'honourable' peers seem to feel it is their duty to seek to evict the parliament square protesters on account of the perception that the protest prevents public access to a world heritage site. If access is such a concern, why then does the GLA persist in fencing off the square when, by the admission of the peers, all reconstruction work has been completed? Furthermore, why have none of the several bodies responsible for the management of Parliament Square ensured that their is a safe way to access the site? At present one has to brave three lanes of traffic without the aide of a pedestrian crossing - something which is quite obviously a violation of equality laws as it prevents wheelchair users accessing the square.

2. Current legislation - The peers posit that the issue with current legislation is that each authorised protester is allowed up to 20 more people under their permission. At a guess I imagine such a provision was allowed for under SOCPA in order for the legislation to be compatible with Article 11 of the Human Rights Act, and perhaps also to save the police a logistical nightmare when granting permisssions to protest. The peers feel that this provision is leading to a violation of the acceptable boundaries of peaceful protest? Well let me first suggest their are no boundaries to what is an acceptable level of peaceful protest when citizens are trying to stop a government committing war crimes. Let me secondly suggest that having to apply for police authorisation to protest is a violation of human rights, whether or not the European Courts find it acceptable.

In fact, as someone who recently stayed at Parliament Square, I would argue that the issue is not that current legislation is too liberal, but that the authorities are failing to enforce their current legislation. Whilst Peace Strike and Brian Haw's protest have SOCPA authorisation, there are several inhabitants at the square who have no interest in peaceful protest and behave in ways which are detrimental to the 'legitimate' campaigns. Despite an awareness of this, the powers that be have failed to check the authorisation of those camped out, and so are allowing the very squatting that the honourable peers are so appalled by. That said we must be aware that those camped without authorisation, are a representation of some of the most disenfranchised members of society, whose addictions and 'anti-social' behaviours are a direct result of social inequality, so perhaps their very presence outside the institution that upholds inequity is a legitimate protest.

The authorities' lack of enthusiasm for enforcing their own legislation is not new to Parliament Square. If we rewind to the days of Democracy Village, one may remember that it had no authorisation under SOCPA and so could have been cleared by the police at any time. By the polices' own admission, however, they were told to stand down (an order which stretched to allowing acts of extreme violence to occur unchallenged).

So in the summer we saw the State was unwilling to enforce its own draconain legislation for fear of revealing the lie which is Britain's democracy, choosing instead to quash peaceful protest through the high court so that it can be claimed D.V. was given a fair trial.

Knowing this I guess I should have a stronger stomach, and that it should have come as no surprise to see a house of unelected representatives busying themselves with finding new ways to silence the voice of legitimate dissent. In fact on closer examination it is not a feeling of nausea that I have at watching the clip, it is a fire in my belly - and that fire is one I know is shared by the many people I have met through visiting Parliament Square. It is a fire that will ensure that whatever new legal fictions the dishonourable peers dream up to protect the interests of the international war machine, there will be honourable protesters challenging their every lie and showing that the power of peaceful protest is something that can never be suppressed.