The Save Shaker Aamer Campaign (SSAC), along with numerous other human rights organisations, including the London Guantánamo Campaign, trade unions, political parties and social movements organised a day of action, involving a rally, march, public meeting and film showing to put pressure on the British government to press for the release and return of Shaker Aamer, the last British resident held at Guantánamo Bay, to this country. 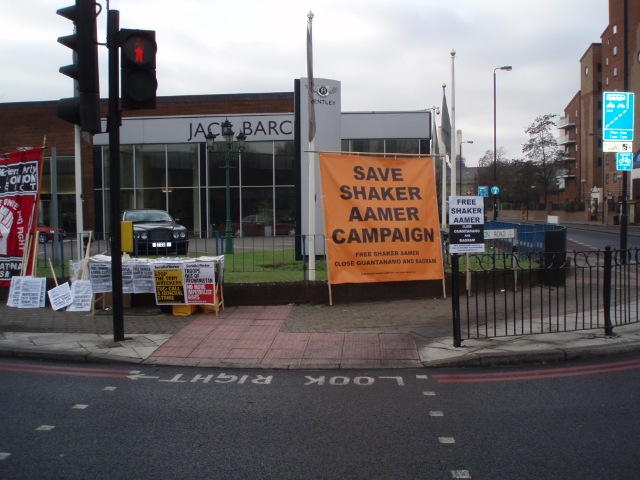 Rally at the site of the new US Embassy in Vauxhall 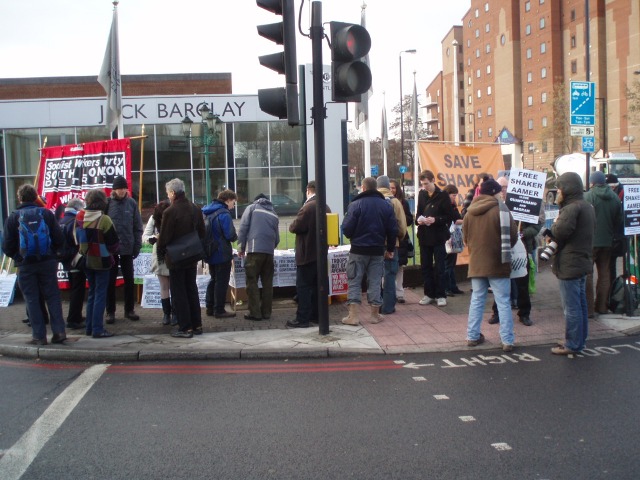 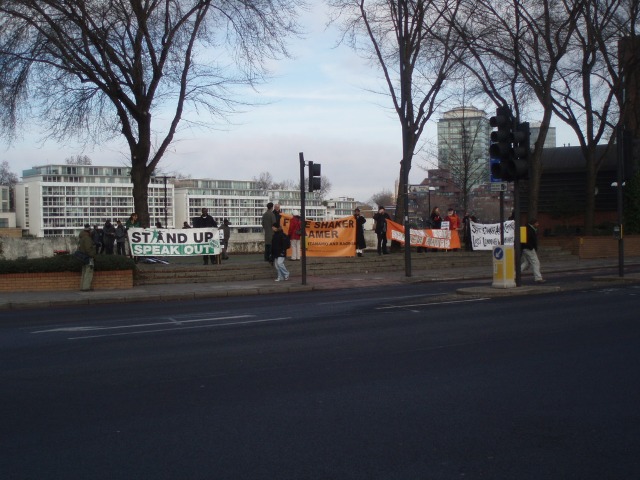 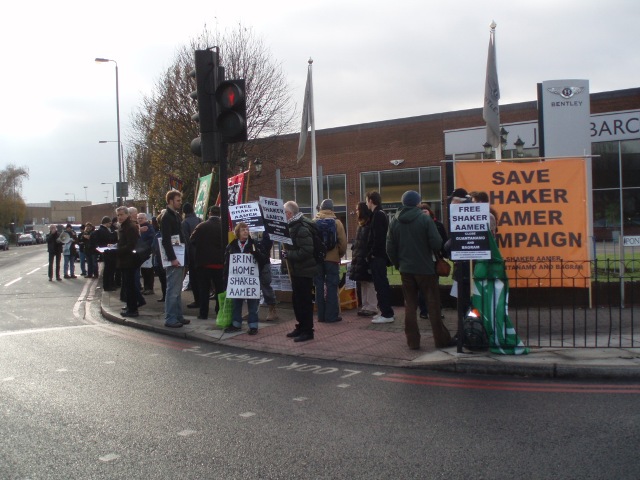 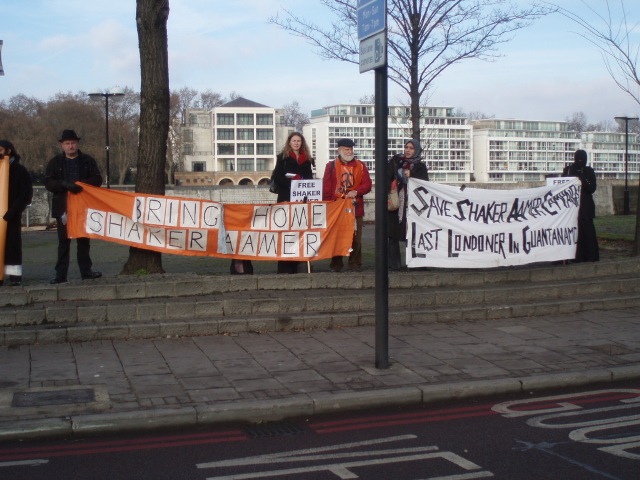 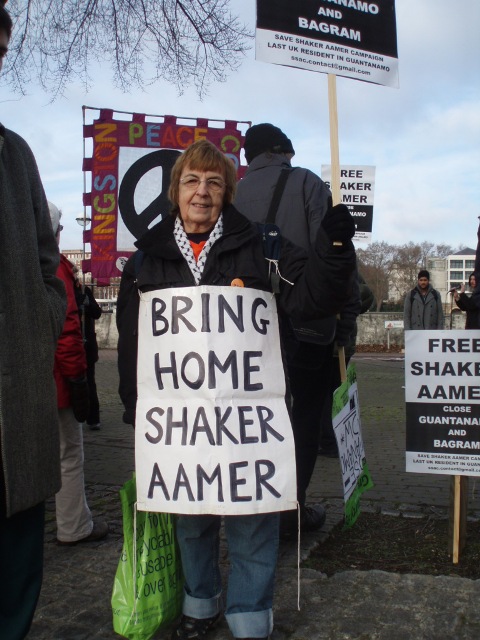 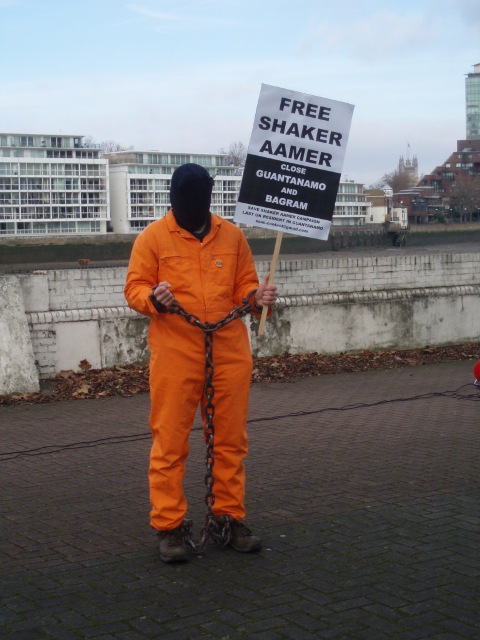 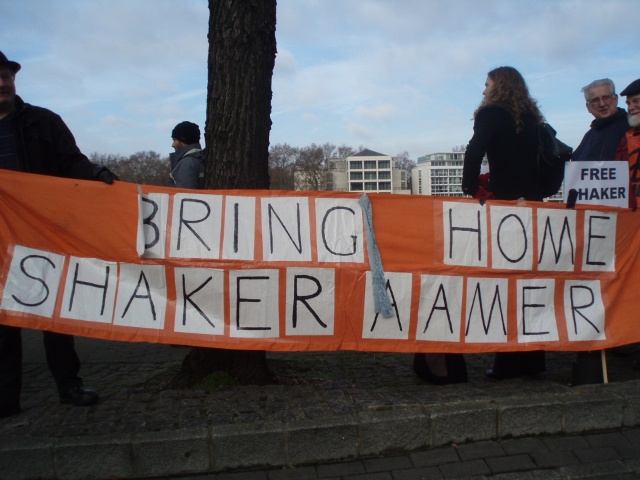 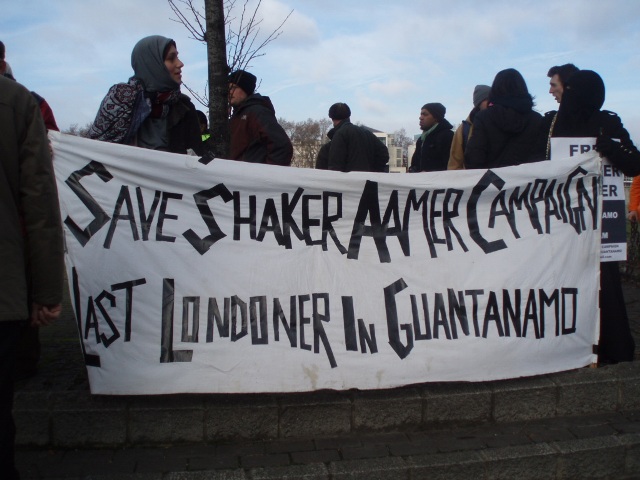 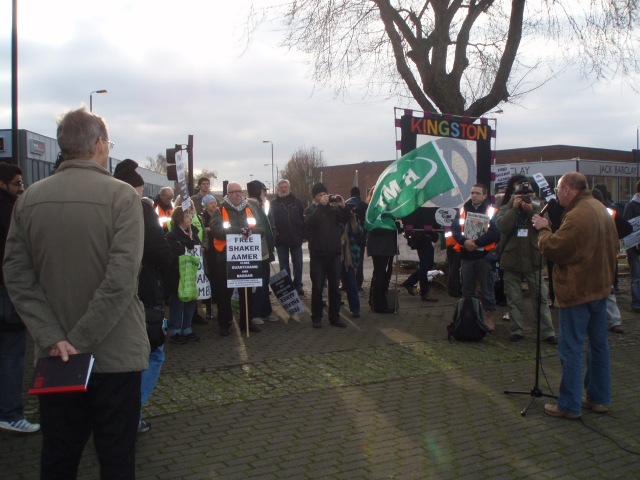 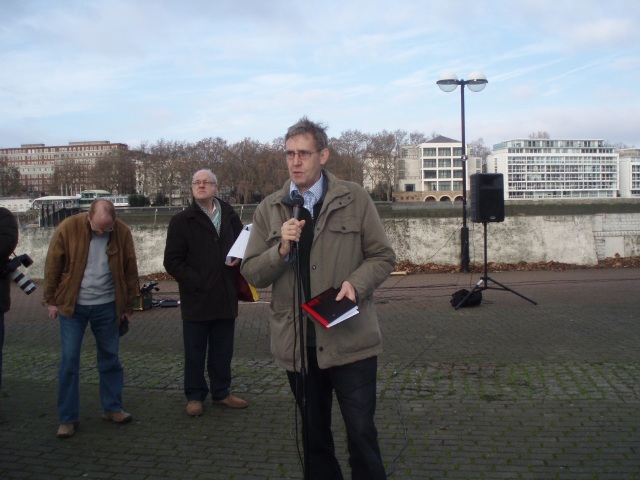 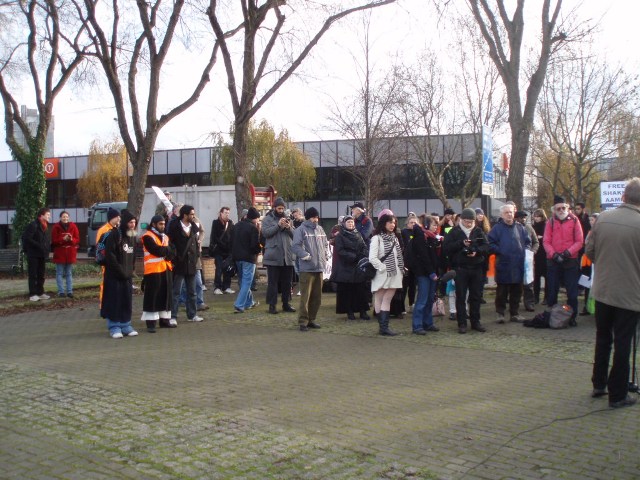 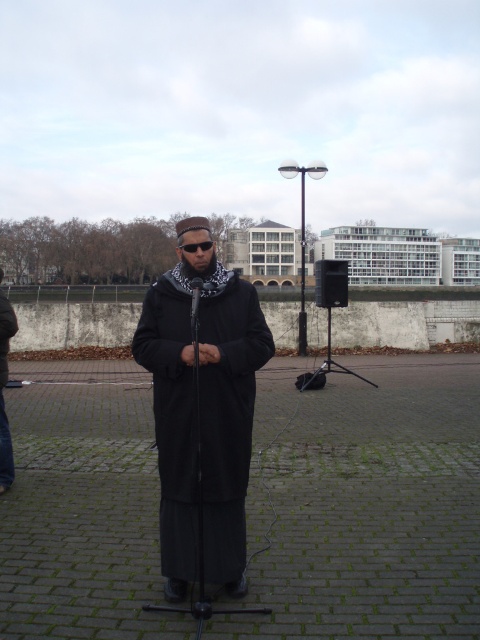 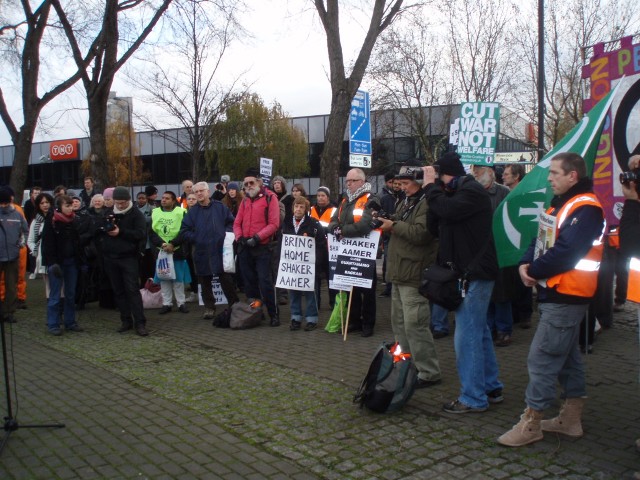 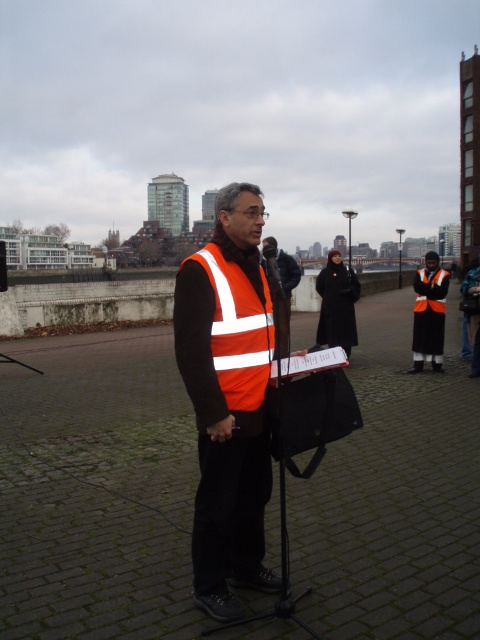 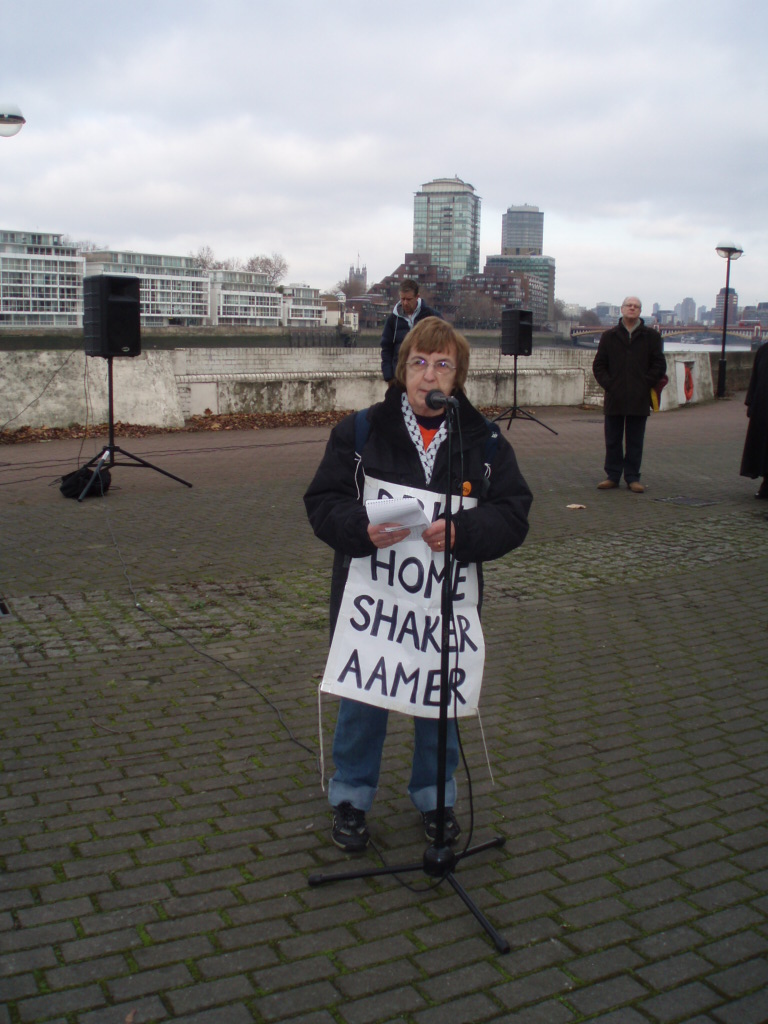 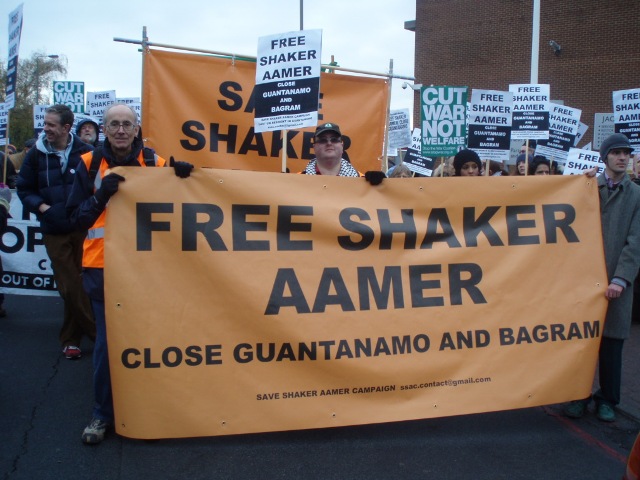 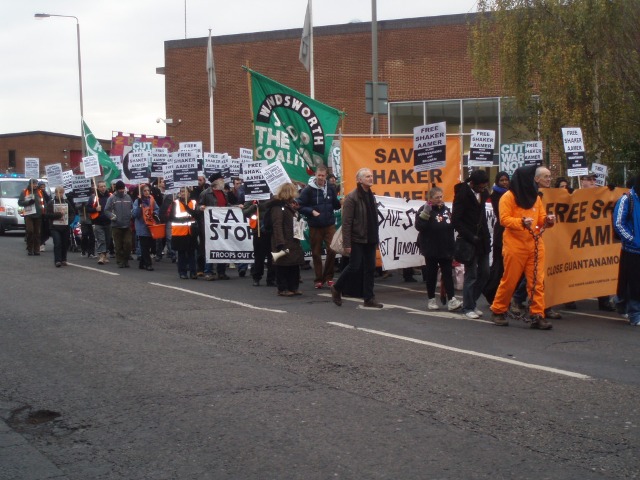 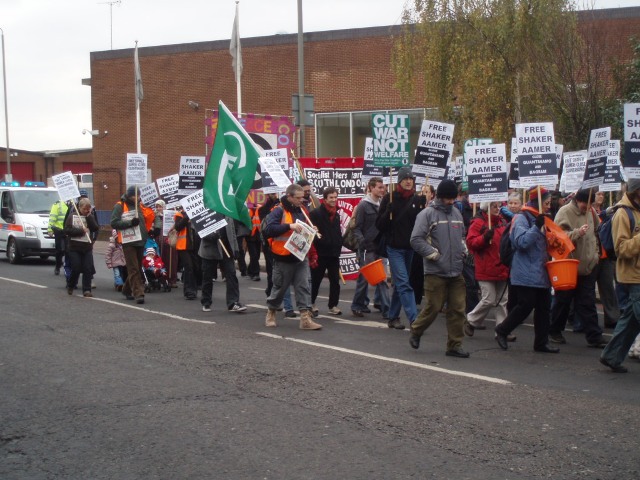 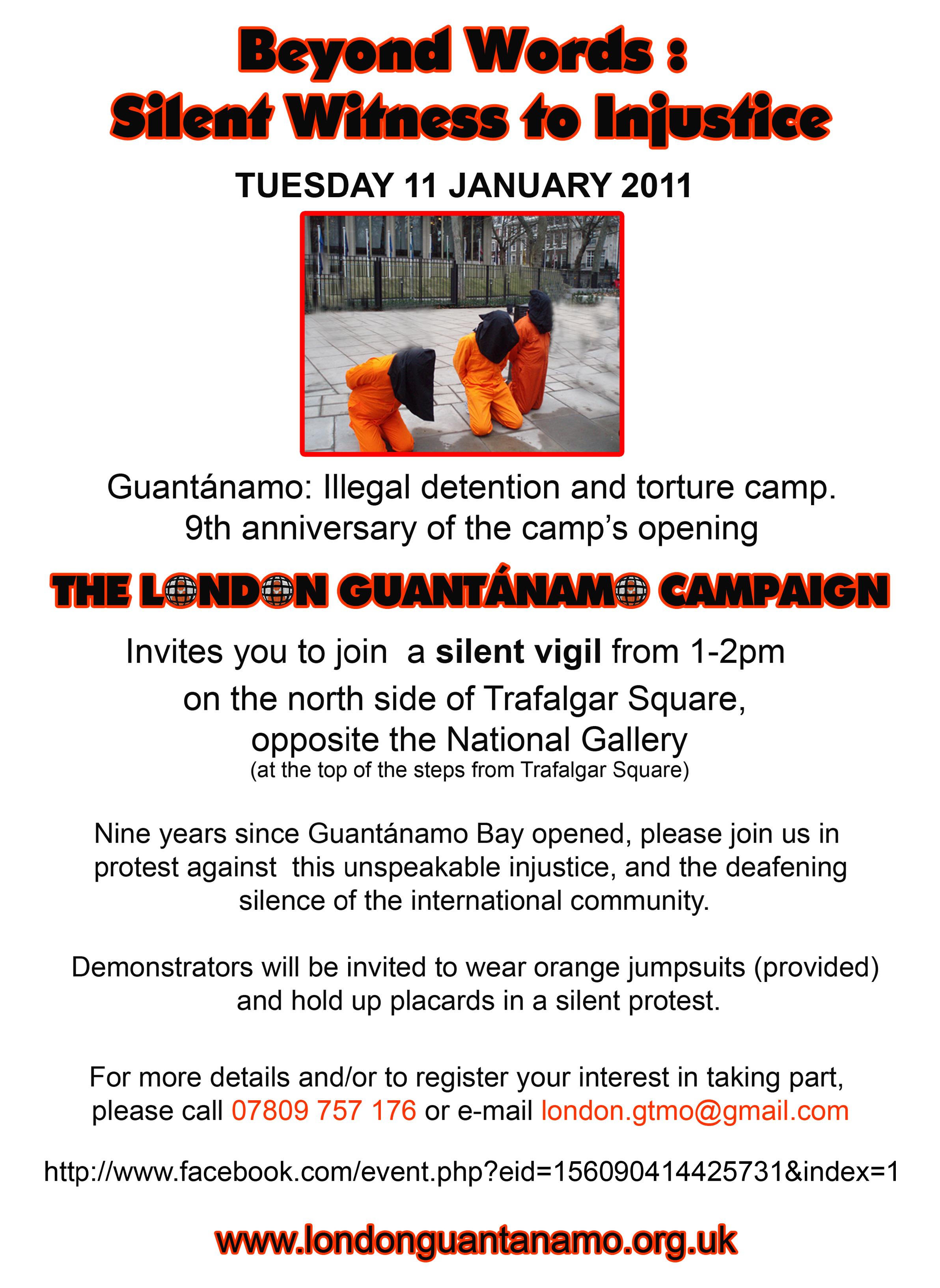 The Save Shaker Aamer Campaign (SSAC), along with numerous other human rights organisations, including the London Guantánamo Campaign, trade unions, political parties and social movements organised a day of action, involving a rally, march, public meeting and film showing to put pressure on the British government to press for the release and return of Shaker Aamer, the last British resident held at Guantánamo Bay, to this country. Shaker Aamer, a 42-year-old Saudi national, with a British wife and four British children, has been held illegally, without charge or trial at Guantánamo Bay for almost nine years. The British government does not consider him a threat and sought his return to the UK in August 2007. Four other men, whose return was also sought at that time, have long since returned. Following the out-of-court settlement made with former prisoners last month in a case concerning the UK’s involvement in their torture, the British government announced it would be stepping up its efforts to seek his release. Since then, Foreign Secretary William Hague and Deputy Prime Minister Nick Clegg have spoken to Secretary of State Hillary Clinton about his case. Unfortunately, Mr. Aamer is still held at Guantánamo Bay and since the election of a Republican Congress in the US, efforts are being made by American politicians to block the release of any more prisoners.

Campaigners from London and other parts of the UK took part in the day of action on Saturday 11 December, which kicked off at the site of the new American Embassy in Nine Elms in Vauxhall, south London. About 70 people took part in a rally at midday overlooking the River Thames which was addressed by former Labour MP for Battersea Martin Linton, who had campaigned for Mr. Aamer’s release while his MP, Chris Nineham from the Stop The War Coalition, Sheikh Suliman Gani from Tooting Mosque and Joy Hurcombe from Brighton Against Guantánamo, reading a message of support from Jeremy Corbyn MP. The rally then set off on an hour and a half long noisy procession from Vauxhall to the Battersea Arts Centre for a public meeting in the afternoon attended by around 100 people. Speakers at the meeting included current Battersea MP, Jane Ellison, who since being elected in May has also worked hard and pressed her government and others in parliament to take action for the release of Shaker Aamer, his solicitor Gareth Peirce, journalist Yvonne Ridley, Sheikh Suliman Gani, Lindsey German from the Stop The War Coalition, Moazzam Begg and others.

In the evening, there was a film showing of Outside the Law: Stories from Guantánamo, which focuses on Shaker Aamer’s story, followed by a discussion with Andy Worthington and Omar Deghayes.

Almost NINE years since it opened, Guantánamo Bay is still open for business. A vote in the US Congress last week has set back attempts to have those facing prosecution sent to the US mainland to face trial in civilian courts rather than the military-style kangaroo courts used at Guantánamo Bay. A report in Congress has also claimed that many prisoners who have been released – only two prisoners who have been sentenced have since been released – overwhelmingly return to terrorism-related crime, even though it has never been established – even through their torture and arbitrary detention for years at Guantánamo Bay, Bagram and elsewhere – that they had committed any identifiable crime in the first place. This has been a popular ruse by the American administrations of both Bush and Obama with each new “birthday” notched up by Guantánamo. However, the Americans are not alone in being responsible for the fact that Guantánamo Bay and its extralegal regime are still in operation. Much of the rest of the world has failed to do anything to help close Guantánamo Bay either.

In Shaker Aamer’s case, the British government MUST take further action and ensure he returns to his family in London. Write to your MP [find them at www.theyworkforyou.com] and demand they express your concerns to the Foreign Office, write to the Foreign Office yourself

private.office@fco.gov.uk and ask for action to be stepped up for Shaker Aamer’s release, ask your MP to sign EDM 1093

http://edmi.parliament.uk/EDMi/EDMDetails.aspx?EDMID=42093&SESSION=905 tabled by Caroline Lucas MP, calls for Shaker Aamer’s return to the UK and outlines all the demands the LGC is making of the current government.

More importantly, make a stand against Guantánamo Bay, torture and arbitrary detention by joining the London Guantánamo Campaign on Tuesday 11 January at lunchtime in Trafalgar Square London for a silent protest vigil to mark nine years of torture and abuse of human rights and due process at Guantánamo Bay:

All pictures copyright of the LGC