TamilNet reports that the use of Wikileaks cables as admissible evidence is to be tested in US courts as Mahinda Rajapaksa, the president of Sri Lanka runs away from another private visit to the US.
This has significant impact on UK wide legal attempts to indict the perpetrators of Crimes Against Humanity and War Crimes in Sri Lanka, 2009 - many residing in the UK if not frequent visitors. 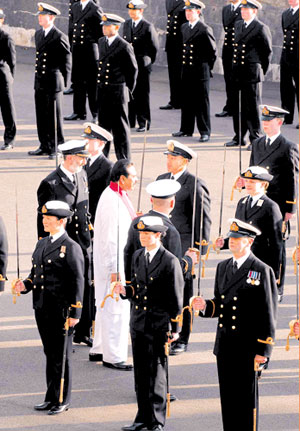 Rajapaksa sued in US Courts over war-crimes, plaintiffs seek $30m in damages
[TamilNet, Friday, 28 January 2011, 20:05 GMT]
Three Tamil plaintiffs whose relatives were killed in three different incidents, all considered to be war-crimes, filed a civil case in the District Court of District of Columbia against Sri Lanka's President Mahinda Rajapaksa Friday at around 4:00 p.m, the attorney for the plaintiffs and former Assistant Deputy Attorney General of the US, Mr Bruce Fein, said in a release sent to the media in the U.S. The legal action was sponsored by Tamils Against Genocide (TAG), a US-based activist group. The plaintiffs seek $30m as damages through six counts of violations of the Torture Victims Protection Act (TVPA).

Though UK Tamils managed to force an early exit of the tyrant Mahinda Rajapaksa and his military entourage last December, military contacts with Sri Lanka are slowly re-established by various sections of the UK establishment.

Richard Armitage of Palme Affair infame in recent times when the project of the New American Century went in to full swing has been pin pointed as the operative who had facilitated the Sri Lankan president's 10 day long 'private' visit to the US. Richard Armitage has been showing a special interest on Sri Lanka, then Ceylon, since his barbaric acts in Vietnam, named Project Phoenix. His UK partner is widely believed to be yet another low life with a 'special interest in Sri Lanka' current UK defence secretary Liam Fox.

One wonders if there will be more WikiLeaks connecting Armitage and / or Fox to the protection racket they extend to a tyrant who is still denying that he did not kill one Tamil!