Public rally in support of victims of torture: 26 June (report and pictures)

Since 1998, this date, the anniversary of the United Nations Convention Against Torture becoming international law in 1987, has been “an occasion for the world to speak up against the unspeakable” (Kofi Annan, former UN Secretary General). Unfortunately, rather than reduce or eliminate the use of torture, the stated purpose of such international conventions and laws, making the use of torture absolutely prohibited, its use continues to spread across the globe with the collusion and connivance of almost all governments. 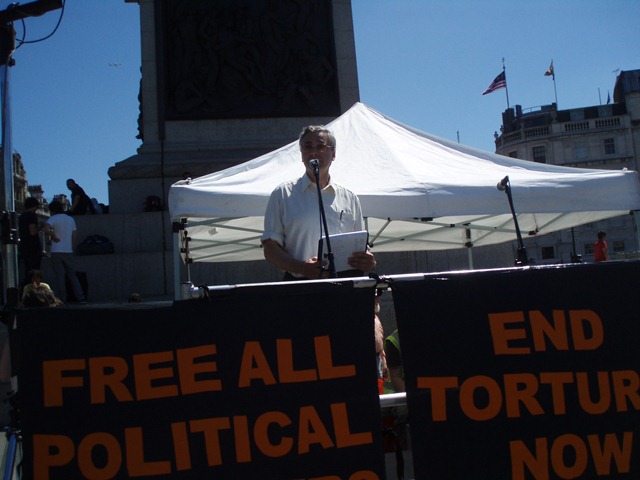 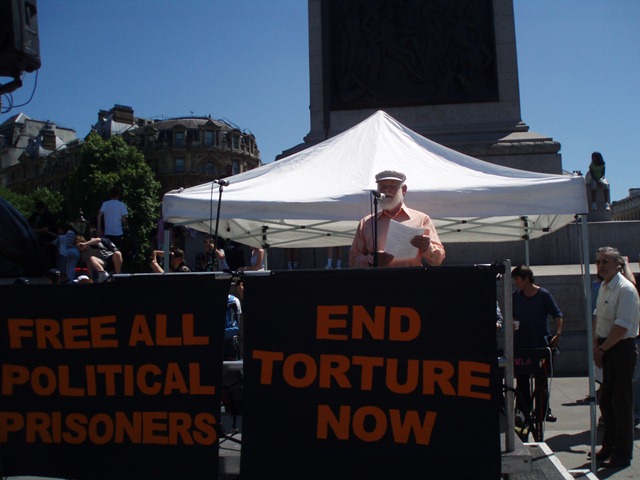 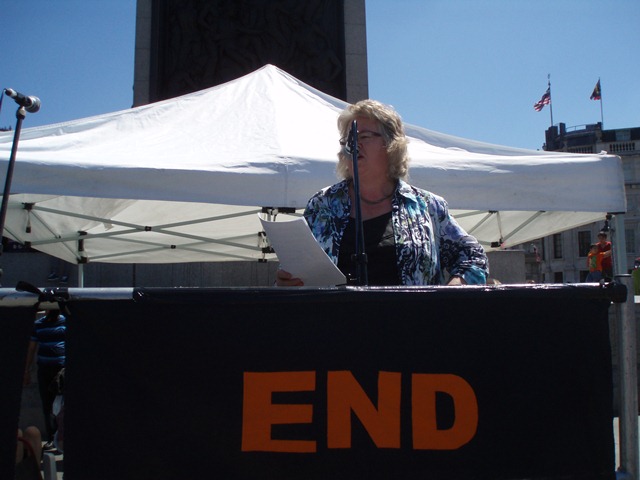 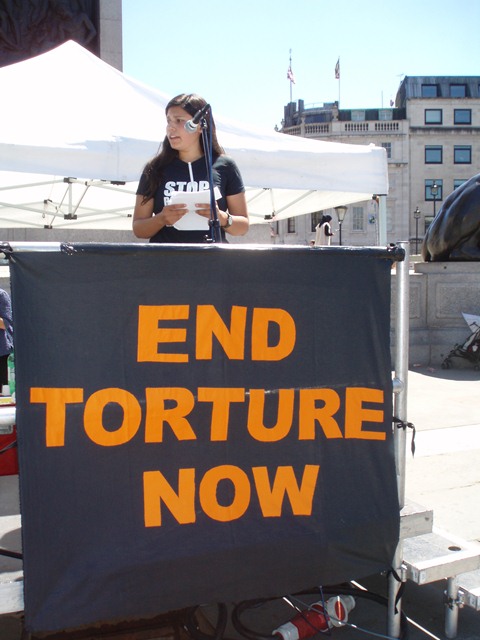 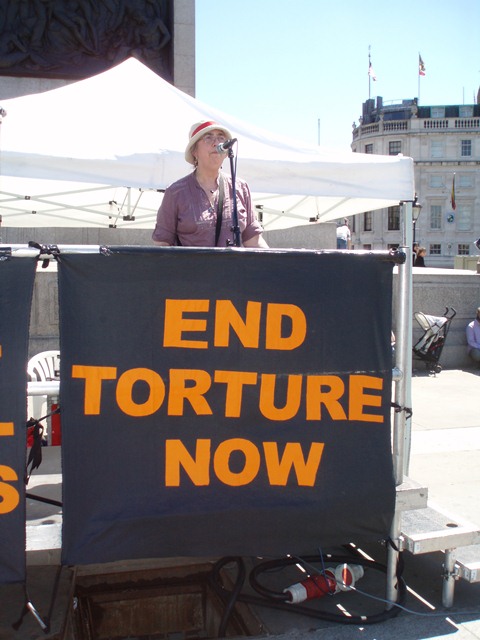 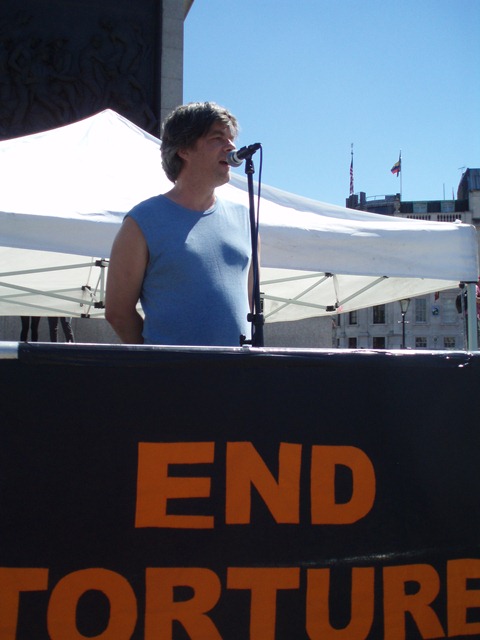 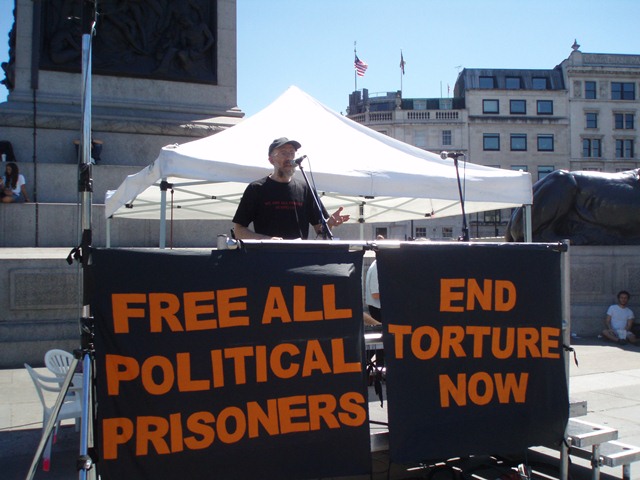 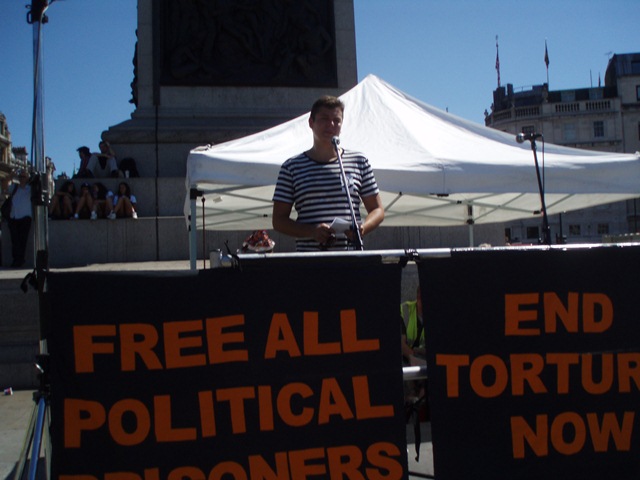 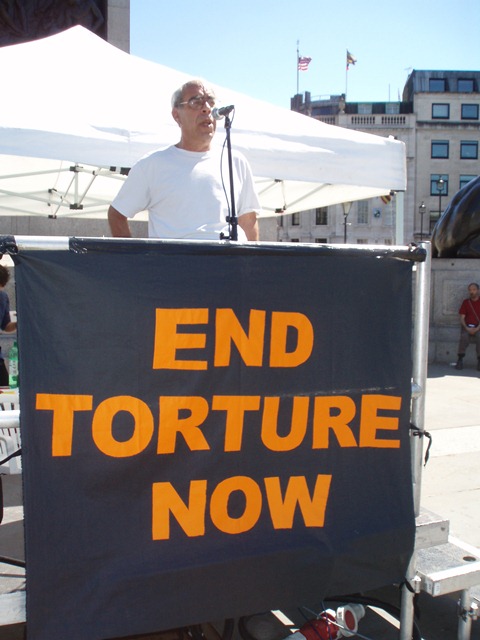 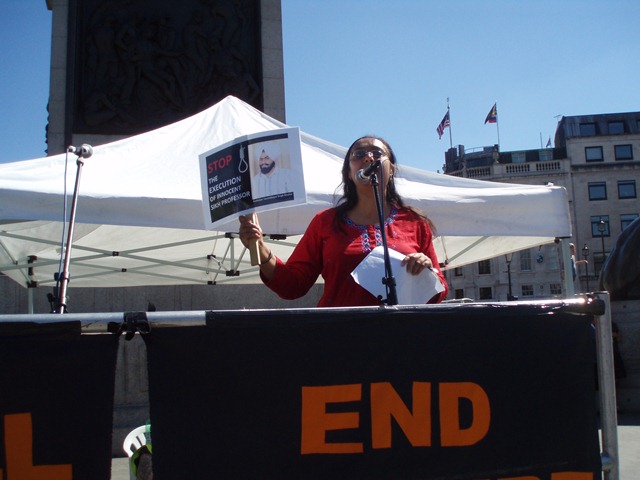 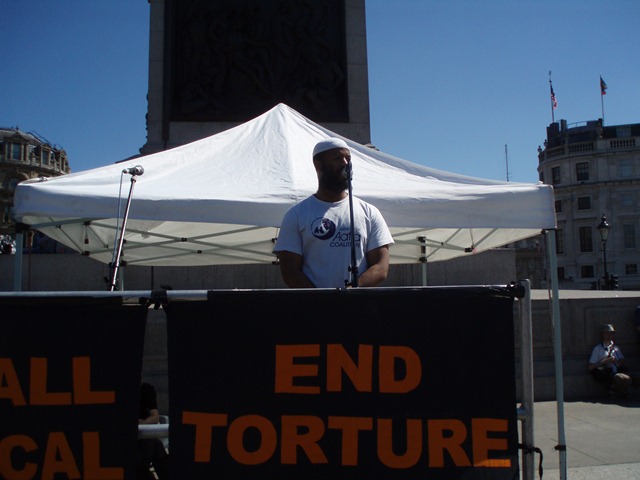 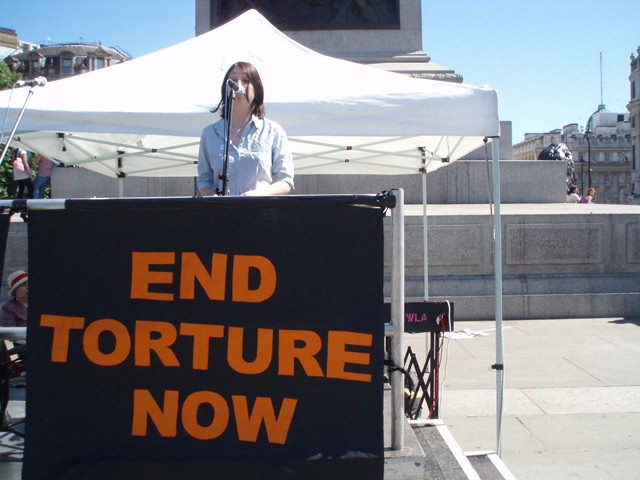 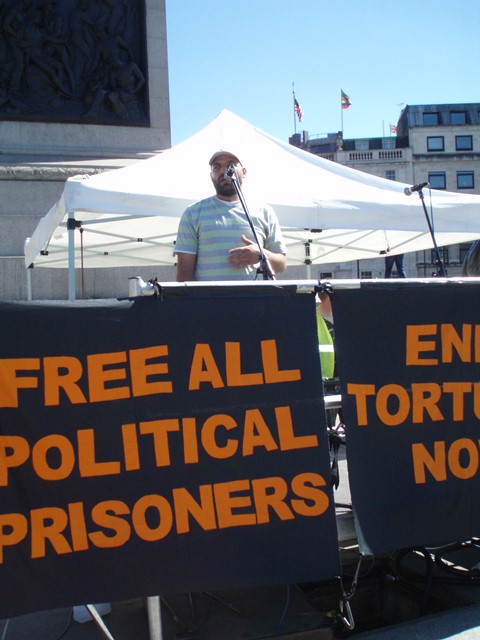 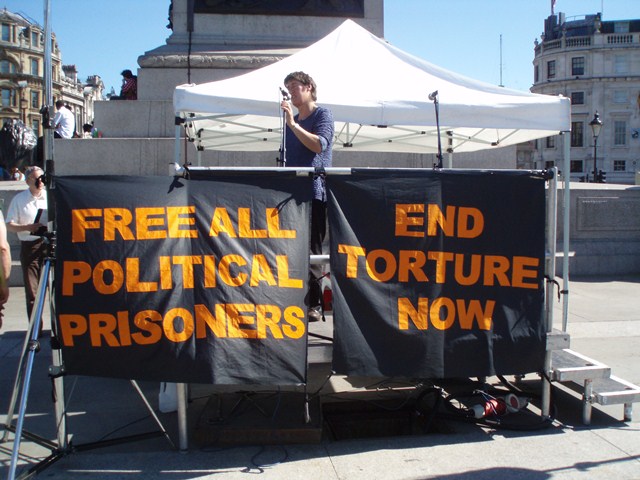 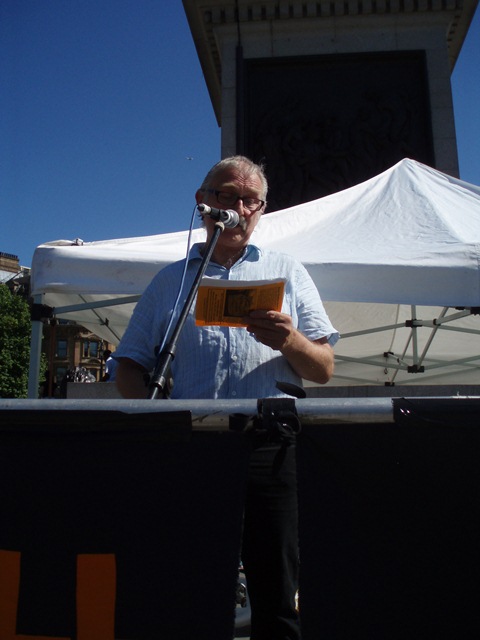 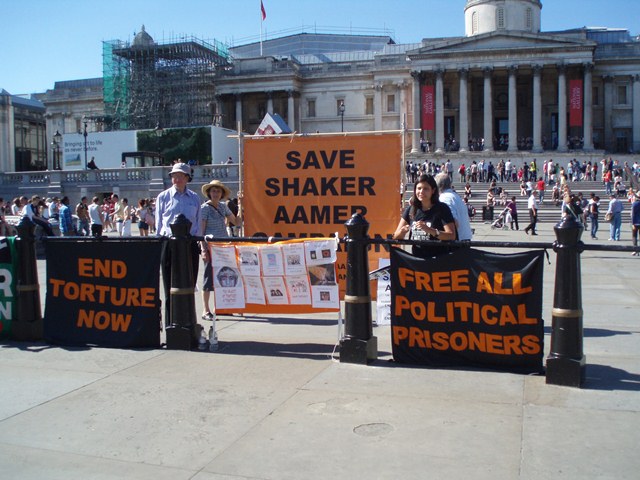 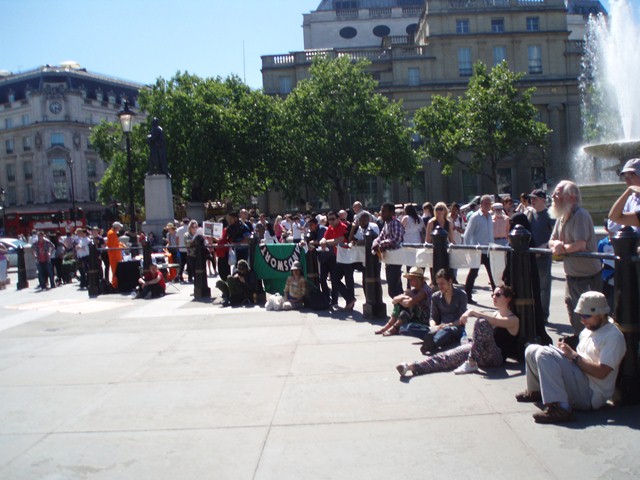 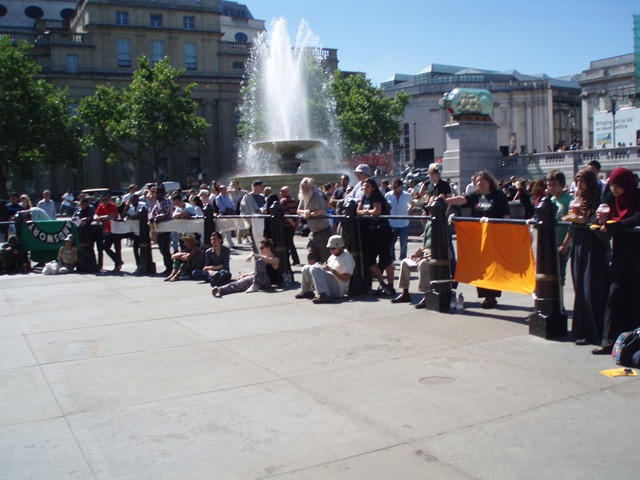 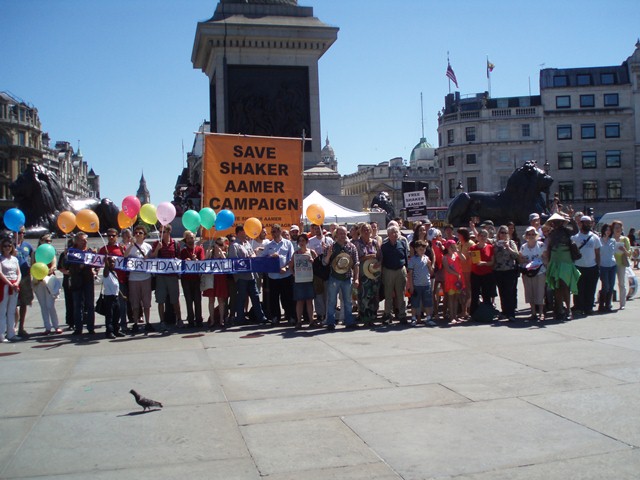 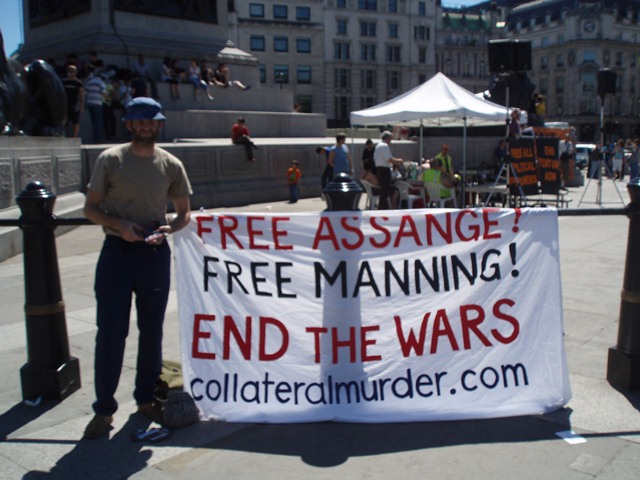 http://londonguantanamocampaign.blogspot.com/) and Kingston Peace Council (www.kpc.gn.apc.org) in Trafalgar Square on Sunday 26 June to mark International Day in Support of Victims of Torture and to show solidarity with victims everywhere.
Since 1998, this date, the anniversary of the United Nations Convention Against Torture becoming international law in 1987, has been “an occasion for the world to speak up against the unspeakable” (Kofi Annan, former UN Secretary General). Unfortunately, rather than reduce or eliminate the use of torture, the stated purpose of such international conventions and laws, making the use of torture absolutely prohibited, its use continues to spread across the globe with the collusion and connivance of almost all governments. In Britain, clear evidence of this is that 26 June 2011 was also the last day of Refugee Week (20-26 June 2011) - many refugees having suffered tortured - and this date falling just one day after Armed Forces Day. The role of the military, police and other State agents in the practice of torture should not be forgotten; the recent inquiry into the torture and death of Iraqi hotel receptionist Baha Moussa at the hands of British soldiers in Iraq in 2003 is evidence of this.
The speakers were introduced by David Harrold from the London Guantánamo Campaign who emphasised the role the UK and US had played in the use of torture and their complicity in it. Noel Hamel, from Kingston Peace Council, called it a “futile occupation” and pointed out that for some public servants, torture falls under their job description, even though its use is prohibited everywhere.
The only politician joining the rally was London Green MEP Jean Lambert. She described torture as “one of the most profound human rights abuses” with psychological and emotional scars that can last forever, long after the physical wounds have healed. She praised the work of the hundreds of centres around the world that help to rehabilitate and give hope to victims. Ms Lambert asserted a sentiment echoed by many speakers, that Britain must ensure that it is not involved in the use of torture.
Maya Evans, from Justice Not Vengeance (

http://www.j-n-v.org/), spoke about a case she brought with Public Interest Lawyers, following an Amnesty International report in 2007 claiming that Afghan prisoners captured by British troops were handed over to the Afghan secret police who then tortured them. A case brought at the High Court last year found that the torture of prisoners included electric shocks, beatings and sleep deprivation. The case led to a change in British policy in Afghanistan. The government then tried to change the law to prevent campaigners from bringing such cases using legal aid; however, following a successful judicial review of this measure, which showed that the Ministry of Defence pressurised the Ministry of Justice to bring about this change, the measure was removed. Ms Evans said we have to “continue to fight so that we can continue to have victories”.
Noa Kleinman, Amnesty International UK’s volunteer North America co-ordinator, and an activist with Amnesty’s throughout its 50 year existence, talked about Amnesty’s commitment to fighting and preventing torture as well as stopping impunity for those involved in torture. Ms Kleinman pointed out that torturers are sometimes victims themselves, coerced into such positions, whereas it is the people at the top, directing such activities who need to be identified and punished.
Andy Worthington (www.andyworthington.co.uk), author of “The Guantanamo Files” and co-director of “Outside the Law: Stories from Guantánamo” focused on the war on terror and impunity for torturers in the US, where responsibility for torture goes right up to the highest levels of power. Efforts have been made to prevent proper investigations into these issues, showing a lack of commitment to its international obligations to prevent and investigate claims of torture.
Dr Frank Arnold, a doctor who has worked at the Medical Foundation for the Care of Victims of Torture, the Helen Bamber Foundation and was a founder of the Medical Justice and its clinical lead, talked about his experience of working with victims of torture in the UK. Over the past five years he has examined over 500 victims from over 50 countries who have suffered and shown various physical signs of torture. However, the internal scars, post-traumatic stress disorder, nightmares, flashbacks and the inability to trust others are lifelong scars. Dr Arnold emphasised that human rights need to start at home; the British government claims to detest the human rights abuses of particular regimes but continues to trade and sell arms to them. Solidarity with victims of torture starts at home; active solidarity is the only thing that works.
Other speakers who addressed the rally were Simran Kaur from TARAN (the Trauma Rehabilitation Network), which works with victims of torture in the Punjab, providing medical assistance and support. She emphasised the need for justice for victims, highlighting the case of Professor Bhullar, who was deported to India, where he was tortured and forced to a sign a confession he later retracted. Ms Kaur also emphasised the need for activists to work together. Ilyas Townsend from the Justice for Aafia Coalition (JFAC – www.justiceforaafia.org) spoke about the case of Pakistani neuroscientist Dr Aafia Siddiqui who “disappeared” in 2003 with her three children, only to resurface in Afghanistan in 2008, following years of torture and abuse in secret jails. In 2010, in spite of a lack of evidence, she was sentenced to 86 years in prison for the attempted murder of American military personnel. Her younger child, six months at the time, is still “disappeared”. Mr Townsend described Dr Siddiqui as being “guilty of being innocent” and made the important point that victims of torture are often not considered human by their torturers, giving them a justification for their actions.
Naomi Colvin spoke on behalf of the UK Friends of Bradley Manning (www.ukfriendsofbradleymanning.org), a support group campaigning for justice for the Welsh-American soldier accused of leaking confidential military documents to Wikileaks. His conditions in detention in military jails over the past year have been compared to conditions at Guantánamo Bay, yet the campaign both within and outside the US has led to him being held in better conditions. Some of the documents he is alleged to have leaked relate to torture by American troops in the “war on terror”. Haci Ozdemir, secretary of the UK section of the International Committee Against Disappearances (ICAD – www.icad-int.org) talked about the effects of torture on communities and families. He described the use of torture as “systematic and institutionalised” in many countries with methods being shared and exported across borders, such as waterboarding. He stated that ordinary people are the force that must end these atrocities. Contributions were also made by Les Levidov from the Campaign Against Criminalising Communities (CAMPACC), Maria Gallastegui from PeaceStrike, Ray Silk from the Save Shaker Aamer Campaign and Andrey Sidelnikov, from the campaign in support of Russian political prisoner Mikhail Khodorkovsky. The rally ended with a poem about hope read out by veteran campaigner Mohamed Qavi.
In spite of the small turnout for the rally, the message went out loud and clear to a crowded Trafalgar Square on a sweltering afternoon. Passers-by joined in the rally and expressed their solidarity with victims. The organisers also met some individuals passing by who have been personally affected by the issue. As many people around the world continue to face the horror of torture, the struggle against it must continue.
Aisha Maniar, London Guantánamo Campaign