After 19 long months of detention, including solitary confinement, Private Bradley Manning has been brought before the court – sort of. His pre-trial proceedings which began on Friday 16th December will be heard by a military ‘investigating official’, the equivalent of a civilian court judge.The hearings are supposed to continue through this weekend. The proceedings are being held in Fort Meade, in the north-eastern state of Maryland, also home to the National Security Agency. 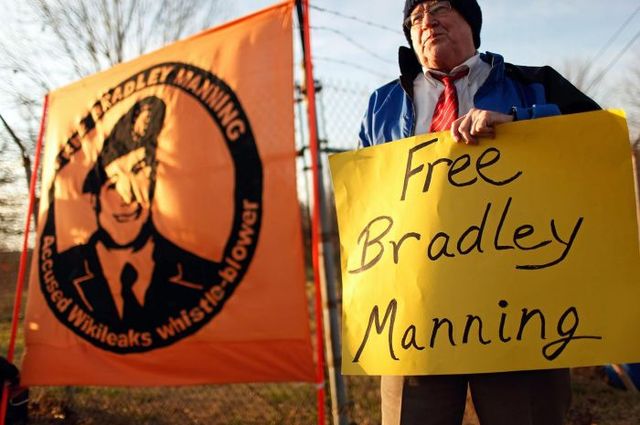 Bradley Manning was imprisoned for allegedly leaking more than 250,000 US diplomatic cables and two war footages to Wikileaks, including the July 2007 video that showed Americans gunning down Iraqi civilians in Baghdad from an Apache helicopter – among the victims of which were two Reuters journalists and two injured children.

This is the first time that Manning has been produced in any kind of judicial court. He has been slapped with 23 charges, the most serious of which is “giving intelligence knowingly to the enemy” – the ‘enemy’ being Wikileaks. The charge is serious because, if convicted, it carries the death penalty, although prosecutors have declared that they will not seek this ultimate punishment. They are seeking instead a punishment of life without parole.

The proceedings themselves, according to reports trickling out, would do a Stalinist regime proud, as they are tightly controlled, with several restrictions being placed on attending journalists. Live coverage is forbidden. The chargesheet itself has been released for the first time. Manning’s civilian defence lawyer, David Coombs, has raised several issues of unfair treatment with the investigating officer, Lieutenant-Colonel Paul Almanza.

Firstly, according to reports, out of 48 defence witnesses requested by Coombs only two (another 10 are shared with the prosecution) have been allowed; whereas all of prosecution’s witnesses – many of whom as mentioned above were on Coombs’ list as well – have been granted.

Secondly, judge Almanza himself has worked for the prosecution in the US Department of Justice, which is currently pursuing its own case against Julian Assange, the founder of Wikileaks. Coombs asked Almanza to step down (the official term being ‘recuse’) citing conflict of interest. The demand has been rebuffed. Almanza will continue to preside over the hearings termed as Article 32, named after the article in the Uniform Code of Military Justice that lays down the procedure for such a hearing.

The outcome of the pre-trial hearings will be referred to a higher military authority in Washington DC, who will then decide if Manning should face a full court martial.

Brief Background to the Case
Private Bradley Manning, a US intelligence analyst, based around Baghdad during the Iraq war, was arrested in May 2010 and briefly held in a detention centre in Kuwait. Since July 2010 he has been held at a prison in Quantico, Virginia. This period of imprisonment has also included solitary confinement, and according to several reports along with that of Amnesty, severe psychological abuse.

The US prosecutors, either back then or at present, have not been able to demonstrate any links between Manning and Julian Assange, except the much-touted online chat. The chat took place between Manning and a hacker named Adrian Lamo to whom Manning is supposed to have revealed his minimal association with Assange and his act of leaking sensitive information. Lamo himself had had former links with Wikileaks, and he promptly delivered the information he is supposed to have received to the state officials.

So, the only real source of evidence the prosecutors have, from what we know so far, is the chat log and Lamo’s claims.

It’s all about realpolitik
Meanwhile, US’s true interest seems to be in Wikileaks. At present, the Department of Justice is trying to pursue Assange, to get him on charges of ‘conspiracy’. Observers say that the ploy might be to break Manning psychologically and get him to testify against Assange. At the moment Assange is fighting his extradition to Sweden on charges of rape and sexual assault. His supporters claim that these are trumped up charges. Assange is currently staying at a friend’s house in the UK.

There seems to be some basis for thinking that the United States government is trying ‘divide and rule’ technique with Assange and Manning, for Assange’s lawyer, Jennifer Robinson, has complained that she has not been given full access to the Manning hearing, and is treated instead like the general public. This means that if the hearings go into the confidential mode, Robinson like other members of the public, will be asked to leave as well, despite her client’s indirect involvement in the case.

Public support for Bradley Manning
Manning, however, has been hailed as a ‘hero’ by all his supporters – and there are quite a few of them. Supporters held a vigil and a rally on December 16th and 17th outside the gates of Forte Meade. The attendees included general supporters, the Bradley Manning Support Network organizers, the Occupy protesters who came in coaches from New York and Washington, Iraq Veterans Against the War, as well as the Vietnam war whistleblower, Dan Ellsberg.