Peasants not allowed into their own Court Appeal!

We're all taking a few days to rest and reorganise right now, so I'll quickly outline the events, what happened and where it's going from here. 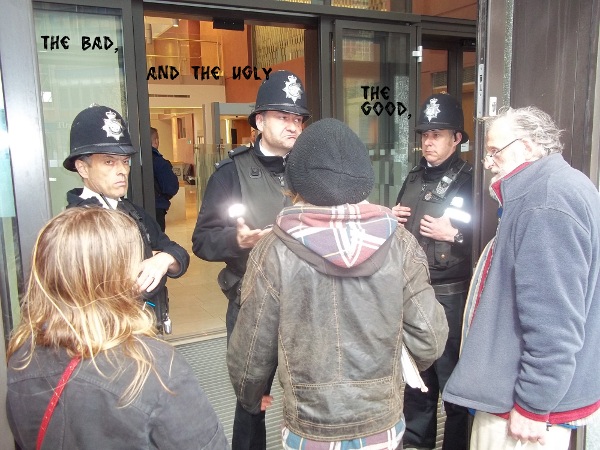 The good, the bad, and the ugly!

Plenty more to come, fields to reclaim and a Forests to protect!
Come on down to an ancient ceremony, and "vision gathering", Sunday 29th- Tuesday 1st @ May Hill, Forest of Dean.

http://www.protectthewilderness.co.uk -our website, images, and articles. Explanations of our intention/ aims at the wilderness, etc.

The only write up so far of this clear violation of justice...

The first video (many more on their way)


The Appeal of the Peasants.

Following and relating to...

We -seriously- defined ourselves as peasants in the Court papers, (see the appeal of the peasants on our website, our legal/ lawful arguments were multiform and ranged from pointing out Gloucestershire County Councils (GCC) fundamental defects in proceedings using the civil procedure rules, to EU human rights legislation, to the 1688 bill of rights -referring to "diverse evill Councellors, Judges" who... "endeavour to subvert and extirpate the Lawes and Liberties of this Kingdome." - by ignoring Common Law, and case precedents... which related to Lord Chief Justice Judge's recent comments....


BRISTOL HEARING
On the 17th of April, Protect the Wilderness had an "appeal hearing" which we called "the appeal of the peasants" in solidarity with international peasant struggle day, it was ment to be in Bristol Civil Justice centre.

I have attached a copy of the "appeal of the peasants", which formed part of our case papers. We had managed to scrape together the money for an appeal and had to submit it three times (the first two attempts were "lost").

Gloucester County Court refused to talk to us "because of the allegation we had made about the judge Watkins" i.e. that he was a treasonous, evill judge -partaking in an unlawful administrative hearing.

He had denied Common Law jurisdiction within the court, dismissed the Magna Carta as a quaint historical document, so our constitutional activist advisor’s served him notice, that he had three days to prove his claim or apologise otherwise he would face criminal charges for treason.

The Bristol Hearing, was to appeal the decision district judge Watkins made in Gloucester County court a few weeks before (see below)

Outside Bristol Civil justice centre, we played a few instruments, had a "seed ball" workshop, and talked about land rights, access and laws -all very peacefully and without indecent.

We got in line, to go through the scanners into the court, after only two of us "frank white" (part-time resident and named appellant on our case papers) and our legal representative's "Mackenzie friend" entered the Court building, the order came down to only allow the named individuals into the court.

John, the "Mackenzie friend" was smartly dressed and is an ex-cop turned constitutional activist, he wasn't named on the court papers. Neither were our legal representatives, who were left outside -yet he found himself having to attempt to present our case without any of the case material, which was in possession of those left out-side behind the ranks of the private security and police.

Checking the "named individuals" on the Court papers, I, Thom Forester was there, along with "persons unknown". I wondered how they were going to let "persons unknown" in, and exclude everyone else?!

They found a way.

A bit distraught that the other members of the Protect the Wilderness Trust, who have been in occupation of the Wilderness Centre with me for the past four months (many of whom spoke, and gave evidence/statements on record at our last court hearing), were not allowed into their own appeal, I stepped forward to enter the Court.

Explaining who I was, the police and private security guards who blocked the entrance told me I had to "prove you are who you are" before I was going to be allowed into the building (transcript below)... an image of me, in a local newspaper with my name below wasn't good enough, he wanted ID -which don't possess, and refuse to carry/ own.

The last court case was farcical, Gloucester County Council (GCC) were awarded possession and an injunction against -and I quote- "persons unknown" from "chopping wood through-out the Forest of Dean"!

As a Forester, I think it's a great pity, that not many other Foresters know about the day a Gloucester district Judge made it illegal for them to exercise their Common Law birth right to collect wood, as broad as their arm.

The council's claim was so full of holes and inaccuracies, it was clearly a product of an incompetent mind. It featured questions like...

"Do you need help any education?"

and told the court that "none of the occupiers are homeless", which we told them is not the case repeatedly.

The “Overriding Objective” -seek mediation before entering the court building" of the "Civil procedure rules" the council used against us, was ignored on their part. All attempts to start a dialogue between the Council and the Protect the Wilderness Trust were ignored.

Their claim contradicted itself many times, claiming that the property was residential, and yet there was no residential property at the site. Picking and choosing the more convenient of check-boxes and truths, the hundreds and hundreds of pages long epic work dedicated many pages to junk html code, from a poorly aimed print-off from the reclaim the fields website, and dozens of pages of photos of the "criminal damage" we like to call the organic garden, and basic repairs we did to the dilapidated education centre.

Basically, the Council were so confident that the judge would just rubber-stamp anything they put in front of him, that they didn't even try to put together a coherent and accurate claim. There assessments were lies and fabrications, their arguments juvenile.

Here is a rough transcript (I tried my best) of one of the many discussions I had with the gatekeepers of justice...
I have the whole event on video... which will be on youtube ... and I'm waiting on even more footage...

COP: you've given your name to be somebody present in court, here,

COP: so you surely need to appreciate that we have to make sure, you are who you are, because you've given your names...

THOM FORESTER:I am not required to carry ID

COP: Im telling you, unless you can show us identification, you're not coming in.

THOM FORESTER: into a public building?,

THOM FORESTER: to a court case that I requested?

THOM FORESTER: ..and I'm not allowed into court..

THOM FORESTER: that we paid for...

COP: it's simple, isn't it. All you've got to do is show us some identification.

THOM FORESTER: I DON'T HAVE ID.

COP: OK... so if you've...you've allegedly brought this to court (2x)
but you haven't got any ID on you. At this moment in time.

THOM FORESTER: your grandfather fought a war, so that we don't have to carry ID, and for you to stand there in front of me, trying to get into that court, and tell me that I'm not who I am, and deny me justice because I don't carry an ID... You know what that is my friends, don't you?.. don't you?

COP: I've got nothing else to say to you, alright.

girl: (to cop) you have no idea what your doing

COP: Who are you to be telling me what I need to do.

THOM FORESTER: Actually I said you need to do it quick, but quitting would be a good idea, if your bosses are telling you to break the law.

COP: Like I said I've got nothing else to say to you. Your not coming in.

Camera Man: Excuse me, under which law is he required to bring this identification.