Two Peace Campers entered the the Explosives Handling Jetty area at RNAD Coulport in the early hours of Wednesday morning. 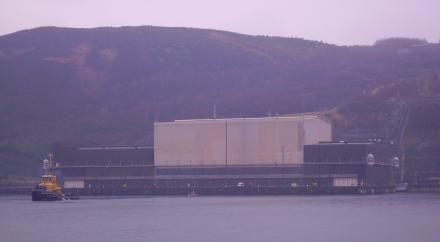 Angus Chalmers and Leonna O'Neill left Faslane Peace Camp on foot at approximately 10pm with the intentions of seeing how close they could get to Coulport under the cover of darkness. By the time they were approaching the outer fence perimeter the two still hadn't been apprehended or detected by security or any of the night vision cctv cameras, and so decided to continue to see how far luck (or the ineptitudes of the security system on what should be the most heavily guarded naval depot in the UK) would get them.

They decided to approach the Explosives Handling Jetty via the shore line and entered by wading water and climbing a razor wire fence. At this point they decided to walk visibly and announce themselves to the first police they saw. To their surprise they were met with zero security personnel and were able to access a jetty a matter of feet from the Explosives Handling Jetty where the Trident nuclear warheads are loaded to the Vangaurd submarines.

Angus climbed a further fence into the establishment setting off a sensor which activated the bandit alarm alerting the MOD Police security and cctv camera operators of their whereabouts. Both were soon apprehended, arrested and charged with military by-laws and the Serious Organised Crime and Police Act 2005 (SOCPA) at approx 4.15 am. They were were brought to Clydebank police holding cells where they were held in custody until court on Thursday afternoon. The SOCPA charges were dropped and they pleaded not guilty to the by-laws charges.

Leonna and Angus said "This is evidence that the Coulport Nuclear Weapons Depot is unsafe. The capacity for this technology to irreparably destroy life and the environment should be reason enough to ensure that it is safe guarded and protected in a way that does not allow for human error or complacency. The relative ease at which we were able to approach and enter Coulport on foot and the close proximity we were able to get to the Explosives Handling Jetty is surprising and disturbing".